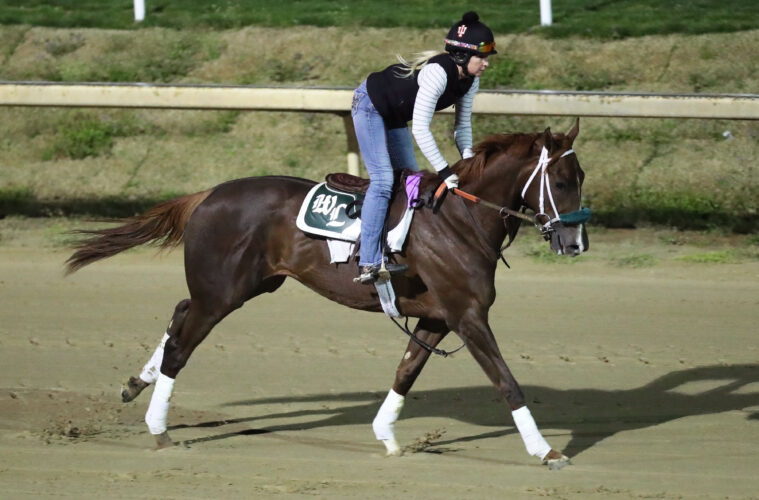 CLASSIC CAUSEWAY BACK IN DERBY PICTURE

Sumaya U.S. Stables’ Pioneer of Medina, third-place finisher in the Louisiana Derby (GII) in his most recent start, tuned up for a possible start in Kentucky Derby 148 by working five furlongs in company in :59.80 over a fast track on a cloudy morning at Churchill Downs.

Trained By Todd Pletcher, Pioneer of Medina is 21st on the Road to the Kentucky Derby leaderboard for the Run for the Roses that is limited to the top 20 point earners that pass the entry box next Monday, May 2.

Shortly after the track opened at 5:15, Briland Farm’s Secret Oath worked six furlongs on her own in 1:13 with jockey Luis Saez aboard for trainer D. Wayne Lukas.

CHARGE IT, MO DONEGAL, PIONEER OF MEDINA – Trainer Todd Pletcher’s three Kentucky Derby hopefuls were on the track at 7:30 with the prime object of attention being Sumaya U.S. Stable’s Pioneer of Medina who worked five furlongs in :59.80, the best of eight at the distance for the morning.

“You can use all the trainer clichés you want,” Pletcher said. “We saw what we wanted to see. It was very good, well executed with a strong finish and he galloped out well.”

Fourth and third behind possible Kentucky Derby favorite Epicenter at Fair Grounds in his past two starts in the Risen Star (GII) and Louisiana Derby (GII), Pioneer of Medina stands 21st on the Kentucky Derby leaderboard.

“I’ll talk it over with Mr. (Oussama) Aboughazale) and we’ll see how he comes out of the work and make a decision,” Pletcher said. “He got a good breeze over the track and he has the opportunity to draw in.”

Donegal Racing’s Mo Donegal, winner of the Wood Memorial (GII) in his most recent start, galloped 1 3/8 miles under Amelia Green and will be ridden in the Derby by Irad Ortiz Jr.

Whisper Hill Farm’s Charge It, runner-up in the Florida Derby (GI) in his most recent start, galloped 1 3/8 miles under Hector Ramos and will be ridden in the Derby by Luis Saez.

CROWN PRIDE (JPN) – Teruya Yoshida’s Crown Pride (JPN) returned to the track a day after working a half-mile in :49.20.

With Masa Matsuda aboard, the UAE Derby (GII) jogged in the mile chute and then schooled in the starting gate before returning to the Quarantine Barn.

Trainer Koichi Shintani is scheduled to arrive in Louisville on Sunday with jockey Christophe Lemaire scheduled to come in the following day.

Gold Star’s Arkansas Derby (GI) winner Cyberknife, with Katie Tolbert in the saddle, jogged about one mile with the pony at 6:40 a.m.

About an hour later, Peachtree Stable’s Lexington Stakes (GIII) winner Tawny Port galloped with Edvin Vargas in the irons. He was joined on the track by Barry and Joni Butzow’s Zozos and Kelvin Perez. The runner-up in the Louisiana Derby (GII) has been on a Friday work schedule while Cyberknife and Tawny Port could work Saturday.

Cox has not made any rider decisions for Tawny Port and Zozos. Florent Geroux has the call on Cyberknife.

The Not This Time colt worked six furlongs in 1:12.20 Sunday at Churchill Downs.

Corey Lanerie has the mount on Smile Happy in the Derby while Brian Hernandez Jr. will pilot Tiz the Bomb.

SUMMER IS TOMORROW – Michael and Negar Burke’s Summer Is Tomorrow, runner-up in the UAE Derby (GII) in his most recent start, galloped a mile and half under Heinz Runge.

Summer is Tomorrow arrived at Churchill Downs Saturday morning and had his first exercise on the track Sunday.

“This is a big eye opener for him,” said Caroline Seemar, wife of trainer Bhupat Seemar. “We have a private track at home and this is like a festival for him.”

Summer Is Tomorrow is scheduled to work Sunday with gate and paddock schooling on the agenda leading up to the Derby, said Seemar, whose husband is scheduled to arrive in Louisville Wednesday.

Mickael Barzalona has the Derby mount.

UN OJO – Cypress Creek Equine and Whispering Oaks Farm’s Un Ojo jogged twice around under Clay Courville, son of trainer Ricky Courville, in his return to the track following a five-furlong work of :59.40 on Saturday, the second-fastest of 70 at the distance.

Winner of the Rebel (GII), Un Ojo is scheduled for a gate schooling session Thursday and will have his final pre-Derby work on Saturday.

Ricky Courville is scheduled to arrive in Louisville Thursday night. Ramon Vazquez has the Derby mount.

The Upstart colt worked a half-mile in :48.80 Saturday at Keeneland.

“It looked like he was galloping through the lane,’ trainer Chad Brown said, who was on hand to oversee his string of horses Monday at Churchill Downs. “It was a super move. I really just wanted to stretch his legs and evaluate how he’s moving and maintaining where he’s at.”

Zandon and several other stablemates are in Barn 25.

COCKTAIL MOMENTS – Dixiana Farms’ Cocktail Moments, runner-up in the Ashland (GI) in her most recent start, galloped during the special Derby/Oaks training window from 7:30-7:45 for trainer Kenny McPeek.

Red Oak Stable’s Goddess of Fire, runner-up in the Rachel Alexandra (GII) and Gulfstream Park Oaks (GII) in her past two starts, was partnered by Humberto Zamora. Pletcher said John Velazquez would have the Oaks mount.

Repole Stable, Eclipse Thoroughbred Partners and Michael House’s Nest, winner of the Ashland (GI) in her most recent start, was partnered by Nora McCormack. Irad Ortiz Jr., who has ridden Nest in all four of her victories, has the Oaks mount.

KHK Racing’s undefeated Shahama had Zamora aboard for her morning exercise. Flavien Prat has the Oaks mount.

Hall of Fame trainer Bill Mott was in attendance Monday and accompanied his 3-year-old filly on the pony.

Secret Oath, with jockey Luis Saez in the saddle, began her three-quarters of a mile work from the 5 ½-furlong marker and completed the move 1/16 mile past the wire.

“It was a big plus with the five-week break since the Arkansas Derby,” Lukas said. “We took our shot in the Arkansas Derby and it didn’t quite work out but we’re really excited to get to run her in this year’s Oaks.”

Lukas has won the Oaks four times but has not run in the race since Colonial Empress’ 11th-place finish in 2012. His most recent victory in the Oaks was in 1990 with Overbrook Farm’s Seaside Attraction.

TURNERLOOSE – Ike and Dawn Thrash’s Turnerloose had an easy morning of training with a one-mile jog under Edvin Vargas.