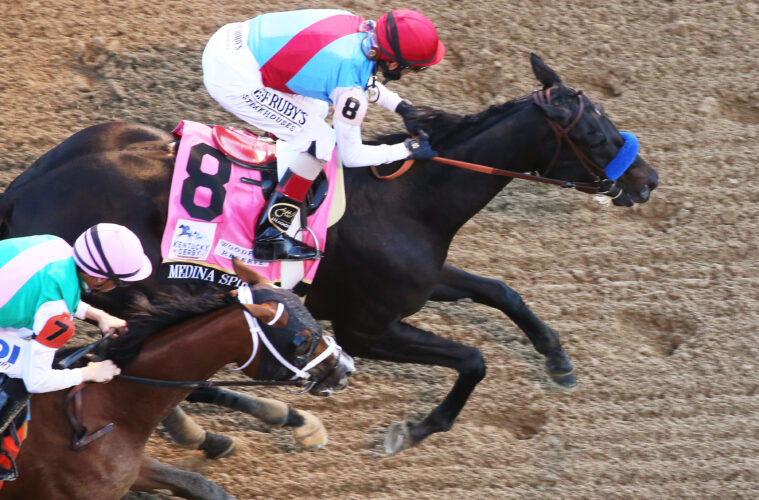 Baffert released a statement: “My entire bard is devastated by this news. Medina Spirit was a great champion, a member of our family who was loved by all, and we are deeply mourning his loss. I will always cherish the proud and personal memories of Medina Spirit and his tremendous spirit.”

Santa Anita will analyze Medina Spirit’s blood, hair and urine and will send the collected samples to the California Horse Racing Board.

Medina Spirit won the 147th Running of the Kentucky Derby on May 1st and it was later revealed that a disallowed race day medication, betamethasone was in his system. Baffert claims that the horse was administered the drug topically to treat a skin condition and a legal fight has ensued to keep Medina Spirit the Derby champion and for Baffert’s multi-year banishment from Churchill Downs to be lifted.

Medina Spirit never ran worse than 3rd in his 10 career races breaking his maiden in his 1st attempt. He won the Grade 3 Robert B Lewis at Santa Anita to claim his 1st stakes victory and ran 2nd in the San Felipe & Santa Anita Derby before winning the Kentucky Derby. Medina Spirit followed up that performance with a 3rd place Preakness Stakes performance (behind Rombauer and Midnight Bourbon). He came back and won the Shared Belief and Grade I Awesome Again before finishing his racing career with his 2nd place finish in the Breeder’s Cup Classic.

We’ll never know what Medina Spirit might have been able to do as a 4-year old, but the little horse out of Protonico and Mongolian Changa by Brilliant Speed proved his worth on the track regardless of the final result of the court battle. May he rest in peace.