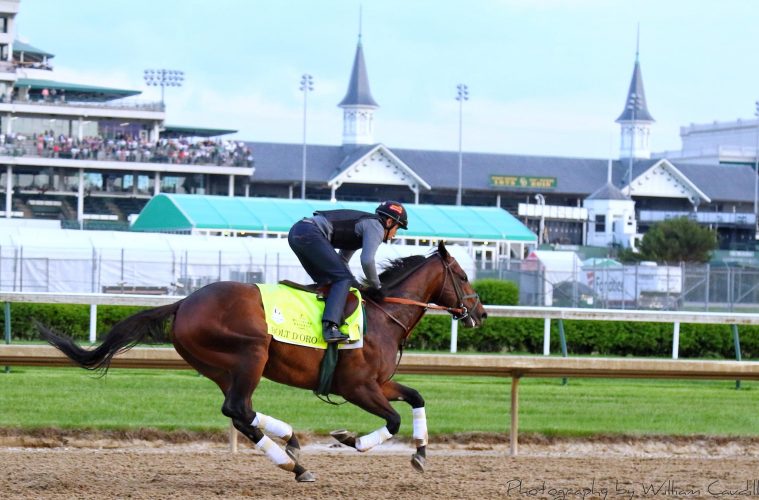 Tax is an Arch gelding trained by Danny Gargan, will be ridden by Junior Alvarado and is owned by R A Hill Stable/Reeves Thoroughbred Racing.

Danny Gargan’s Kentucky Derby starter will be Tax. Gargan claimed Tax from Claiborne Farm & Ben Colebrook at Keeneland in October. There was a 7-way shake to claim Tax and Gargan found himself with a really live young horse. Tax currently owns 1/3rd of all of Gargan’s graded stakes wins as he has just won 3 stakes races during his career.

Junior Alvarado is a 32-year old rider from Venezuela. Junior was about Mohayment in his 4th place Kentucky Derby finish in 2016 and was 12th on Entinced in 2016. Alvarado has yet to win a race in the Triple Crown series but does own a number of Grade I wins. He’s ridden notable horses Effinex, Exaggerator and Flat Out among others.

R A Hill Stable is also involved in the ownership of Vekoma. Reeves Thoroughbred Racing has had some great success winning the Breeders’ Cup Classic with Mucho Macho Man. The BC Classic is probably the top of the horse racing game and with that taste of success Reeves is hard at work attempting to bring horse racing to their home state in Georgia.

Danny Gargan entered Tax into the Remsen Stakes following his claim at Keeneland and finished a live 3rd behind Maximus Mischief and Network Effect in his last race as a two-year old. Tax then overcame a stumble at the start of the Withers and went on to win the Withers. There weren’t any eventual Derby horses in the Withers but he was able to get a head in front of Not That Brady and ran a 103 Equibase speed figure. In the Wood Memorial, Tax was able to run 2nd to Tacitus and did beat Derby contender Haikal.

I like that Tax has really developed speed figures (79, 82, 100, 103, 105). See him consistently rate ahead of where he was the race prior is a super indicator as he rises to better and better competition. I also really thought Tax looked strong at the top of the stretch in the Wood Memorial before Tacitus closed to win.

It’s still a mystery what type of field Tax can actually beat to the wire first. Obviously running second to Tacitus is a major feat. And he was clearly 2nd best to Tacitus. But it is still 2nd and Tacitus went by him easily in the lane.

My Take on Tax

I’m not entire sure Tax is going to be able to beat the top level of this group. Tax was able to rate off the speed smartly in the Wood Memorial and let the two long shots burn themselves up and Alvarado was very cool in the saddle to not get too caught up in that duel up front. I expect a similar situation to play out in the Derby except with a lot more traffic. Tax was run down pretty easily by Tacitus and didn’t appear to like the mile and an eighth distance. I am skeptical of his ability to get through traffic and get the distance and have anything left for the wire.