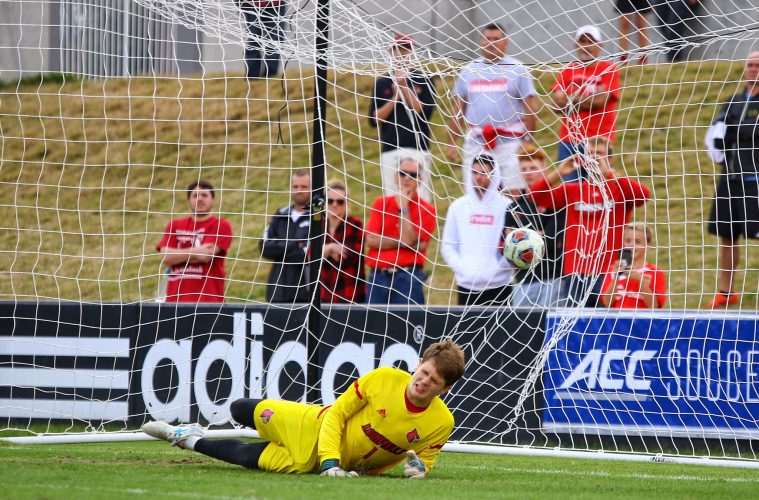 LOUISVILLE, Ky. – The No. 6 University of Louisville men’s soccer team saw its 2017 ACC Championship pursuit halted on Sunday afternoon as 16th-ranked Virginia earned a 4-3 shootout victory in the quarterfinal match at Dr. Mark and Cindy Lynn Stadium after the two sides played to a scoreless draw in regulation and overtime.

With the shootout win, the sixth-seeded Cavaliers (11-3-4) will host No. 7 seed Notre Dame in an ACC semifinal on Wednesday in Charlottesville. The Fighting Irish upset No. 2 seed North Carolina 2-1 on Sunday in Chapel Hill. No. 1 seed Wake Forest will host No. 5 seed Clemson in Wednesday’s other ACC semifinal.

The third-seeded Cardinals (11-2-4) were on the wrong side of Sunday’s outcome despite controlling much of the action and dominating the chances throughout the 110 minutes. Louisville had a 13-6 advantage in shots, including a 5-1 margin in the two 10-minute overtime periods. The Cavaliers only shot on frame in the match came in the first overtime period, while the Cardinals narrowly missed on a chance to win the match in the second overtime when Tate Schmitt‘s header from inside the box caromed off the right post in the 108th minute.

In the shootout, the Cavaliers connected on four of their five chances, including the final attempt from Nathaniel Crofts Jr., to set off a celebration along the end line near on the west side of the pitch. Mohamed Thiaw and Sergi Nus were successful in the first round of attempts before Virginia gained an advantage in the second round after Jeff Caldwell turned away Walker Andriot‘s attempt and Pablo Aguilar was successful for the road side. Caldwell made another save in the third round on a shot from Tate Schmitt while Will Meyer stopped Jean-Christophe Koffi’s attempt to keep the Cardinals in striking distance.

Adrien Cabon and Joe Bell were both successful in the fourth round before Louisville’s Tim Kubel connected on his attempt in the fifth round to even the shootout score at 3-3. Crofts followed by delivering inside the far left post on the fifth and final attempt for the Cavaliers.