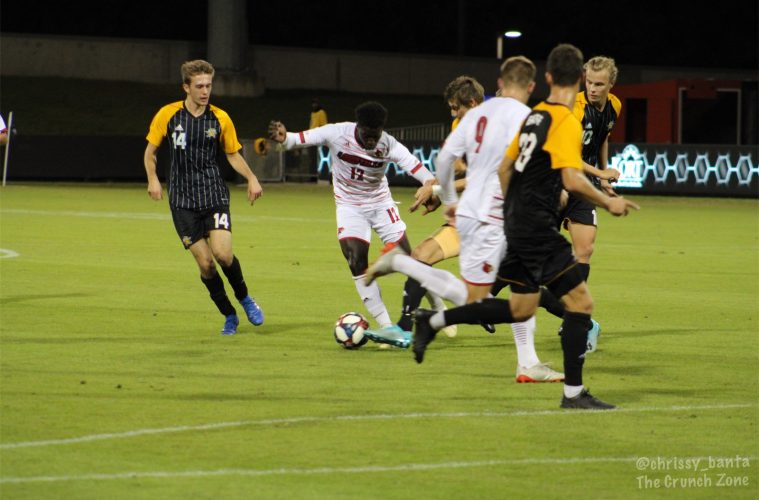 A goal by Izaiah Jennings in the 62nd minute earned the University of Louisville men’s soccer team a 1-0 upset victory over No. 14 seed and 18th ranked UC Davis in the second round of the NCAA Tournament Sunday afternoon, November 24. The victory advances the Cardinals to the third round of the NCAA Tournament where they will travel to No. 3 seed Georgetown Sunday, December 1 for a noon match.

The win improves the Cardinals to 10-7-3 on the season, while the Aggies end their season 13-5-2. With the victory, the Cards advance to the third round of the NCAA Tournament for the third time in the last four years and the seventh time in the last 10 seasons.

UC Davis out-shot the Cards on the afternoon 18-5, but for UofL it was goalkeeper Jake Gelnovatch who put on a show. Gelnovatch finished the match tying a career-high with seven saves to earn his eighth shutout of the season. The UofL defense along with Gelnovatch held the Aggies off the scoreboard in the final minutes despite six shots coming after the Louisville goal.

The match was scoreless going into halftime as neither team was able to convert in the first half, UC Davis held a 6-3 margin in first-half shots. The Aggies came out of the locker room firing as they put a shot on goal 20 seconds into the second half.

Louisville was able to breakthrough in the 62nd minute. Pedro Fonseca dribbled up the left side and found Jennings with a long cross. Jennings beat his Aggie defender, struck a cross from the top of the box past the goalkeeper and into the bottom left corner of the goal. The goal was Jennings’ fourth of the season.

The Cardinals’ defense held strong in the final four minutes, not allowing a UC Davis shot. The Aggies were looking for one final chance with 10 seconds to play, but the UofL defense was able to strip the ball and clear it to cement the victory.

The Cards now travel to Georgetown to face a Hoyas team they defeated 1-0 in double overtime back on Sept. 24 in Louisville. UofL leads the all-time series with the Hoyas 2-1.