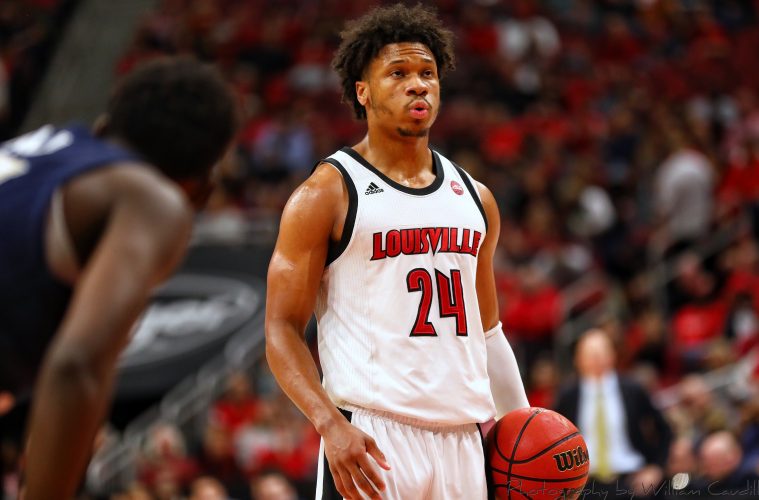 Despite a late game scare the #2 Cardinals managed to hold on against Akron on Sunday night and improved to 6-0. A scoring margin that had been as high as 22 began to slowly dwindle throughout the second half and Akron was able to draw within as close as four with about a minute to play. Free throws down the stretch and a resurgent defense allowed Louisville to slip away with an 82-76 victory.

Things started off with quite the bang in the second frame of a Yum! Center double header. The women had defeated Boise State 98-82 earlier in the day, and the men kept the energy going with a massive Steven Enoch dunk straight out of the tip. Jordan Nwora and Ryan McMahon sparked an offensive fire with a string of three pointers while Steven Enoch and Dwayne Sutton dominated the glass. The Cardinals managed to double-up the Zips on the boards in the first half while the defense held Akron to under 40% shooting.

Both David Johnson and Malik Williams put in shifts on the court throughout the night and made themselves known even if the stat line doesn’t show it. Fresh Kimble once again looked great at the point coming off the bench and the first half for the Cardinals looked about as good as we’ve seen to date. Taking a 47-31 lead into the locker room at the half made things seem well in hand.

The Cards seemed to be carrying things forward with an 8-2 run to start the second half but the Zip collected themselves and started to chip away. The diminutive Akron guard Loren Cristian Jackson was joined by senior guard Tyler Cheese put on an exhibition to join fellow guard Channel Banks in double digits. Meanwhile the Cardinals caught the shooting bug and went cold over a few two to three minute stretches. 49% shooting and 7 for 11 from three in the first half was followed by 33% shooting and 2 for 11 from three in the second half.

As time ticked away the Zip would surge during Louisville cold spells and slowly but surely crept closer and closer. Enabling this were some late game mistakes and mishaps as the Cardinals committed some timely turnovers. Akron’s Jackson pressed up the court on several breaks off rebounds and with three consecutive layups had pulled the Zips within four. Louisville rebounding that had dominated the first half suddenly gave way to their opponent who capitalized readily.

But in that critical moment the Zips went cold and Ryan McMahon hit free throws to seal the six point victory. Any win you can walk away from is a good one, and Chris Mack was strangely calm after the game. From his perspective, he gets the win plus the learning opportunities from the late game film. The Cardinals face the Hilltoppers of WKU in Nashville on Friday.