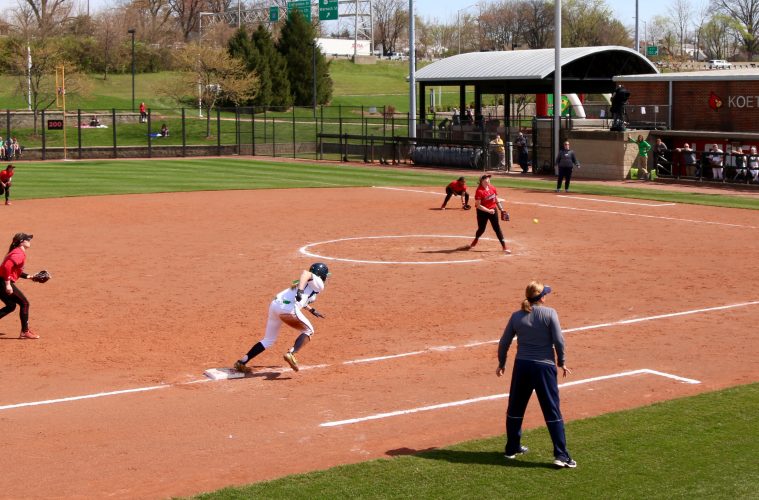 The Cards softball team fell 10-1 to No. 21/22 Kentucky Wednesday at Ulmer Stadium.

Junior Jenna Jordan went 2-for-2 with an RBI to pace Louisville offensively, but the Cardinals could only muster four hits and tied a season high with four errors as Kentucky evened the all-time series between the teams at 19 wins apiece.

Kentucky (25-11) struck early with an unearned run in the first inning when Katie Reed led of the game with a hit and an error on Bailey Vick’s sacrifice bunt pushed her to second. A walk to Jenny Schaper loaded the bases for Abbey Cheek who hit into a double play that saw Reed cross the plate.

The second inning brought another unearned run for the Wildcats as Rachael Metzger was hit by a pitch, stole second and took third on a groundout. Another Cardinal miscue made the score 2-0.

The Wildcats used four hits, a walk and an error to tally four more runs in the third. Cheek had an RBI hit, Erin Rethlake had a two-run single and an error sent home two more runs to extend Kentucky’s lead to 6-0.

Louisville got a run back in the fifth when sophomore Megan Hensley doubled to lead off the home half of the inning. Freshman Celene Funke entered to pinch run and came around to score on Jordan’s hit up the middle to put the Cards on the board. Pinch-runner Michala Riggle eventually moved to third, but a groundout ended Louisville’s last scoring threat.

UK added  three more runs in the sixth when Reed reached on a bunt single, stole second and scored on Vick’s RBI hit. Jenny Schaper walked and Cheek was intentionally walked to load to set up Breanne Ray’s three-run double.

“We started off the game with walks which didn’t help us and errors which put our backs against the wall,” said UofL head coach Sandy Pearsall. “Once we opened the flood gates, that gave Kentucky the confidence they needed.”

Hensley (5-6) took the loss, allowing six runs, four earned, on five hits and striking out one while walking six in five innings. Becker surrendered four runs, one earned, on four hits and struck out two in one inning.

Prince (12-6) picked up the win, holding Louisville to one earned run on four hits and struck out six while going the distance in the six inning game. Ray went 2-for -4 with three RBIs while Reed and Cheek each had a pair of hits to lead the Wildcats at the plate.