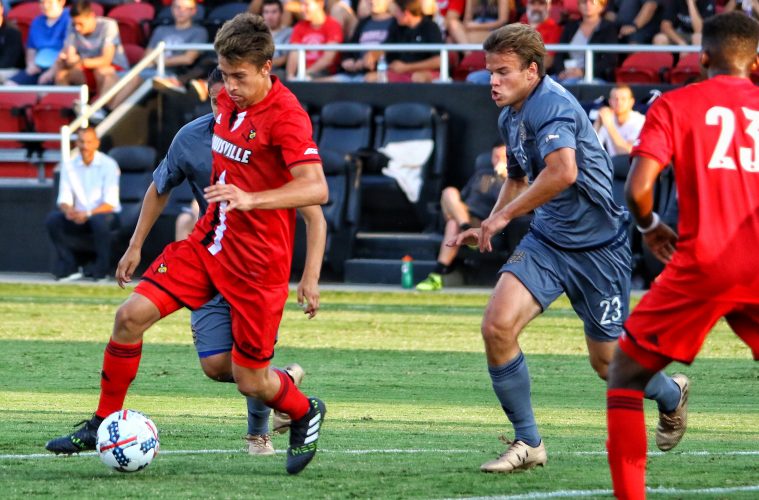 WESTFIELD, Ind. – Senior Tate Schmitt converted the only goal of the match as the No. 6 University of Louisville men’s soccer team claimed a 1-0 victory over No. 2 Indiana in Wednesday night’s exhibition match at Grand Park.

Schmitt connected on a volley from 35 yards away in the 34th minute of action to lift the Cardinals into the lead. The goal by the All-ACC performer proved to be enough as sophomore goalkeepers Will Meyer and Jake Gelnovatchcombined for the shutout. Meyer worked a clean sheet in the opening 45 minutes while Gelnovatch closed the match with a strong second half for Louisville in the first of its two preseason matches in 2018.

Indiana finished with a 12-6 advantage in shots, while the Cardinals had a 3-1 edge in saves. The Hoosiers tallied five corner kicks and Louisville totaled three corner kick chances.

LOUISVILLE, Ky. – The No. 6 University of Louisville men’s soccer team completed its preseason schedule with a dominant 3-0 victory over Evansville on Saturday evening at Dr. Mark and Cindy Lynn Stadium.

The Cardinals delivered another strong performance at home finishing with a 15-2 advantage in shots. Each of Louisville’s three goals came in the second half against the Purple Aces.

The Cardinals struck for their first goal when junior Kino Ryosuke connected on a penalty kick in the 52nd minute. The PK chance came after a Louisville player was pulled to the ground in the box by an Evansville defender on a corner kick.

Less than three minutes later, the lead increased to 2-0 after freshman Haji Abdikadir scored inside the upper right corner from 25 yards away in the 54th minute. After finding some space up the left side, Abdikadir delivered a right-footed strike for the goal.

The final goal of the night came in the 72nd minute when a volley from redshirt freshman Cameron Wheeler caromed off the hands of Evansville goalkeeper Greg Niven and into the goal.

Defensively, Louisville did not allow a shot on goal for the Purple Aces. Sophomores Jake Gelnovatch (first half) and Will Meyer (second half) combined for their second preseason shutout.