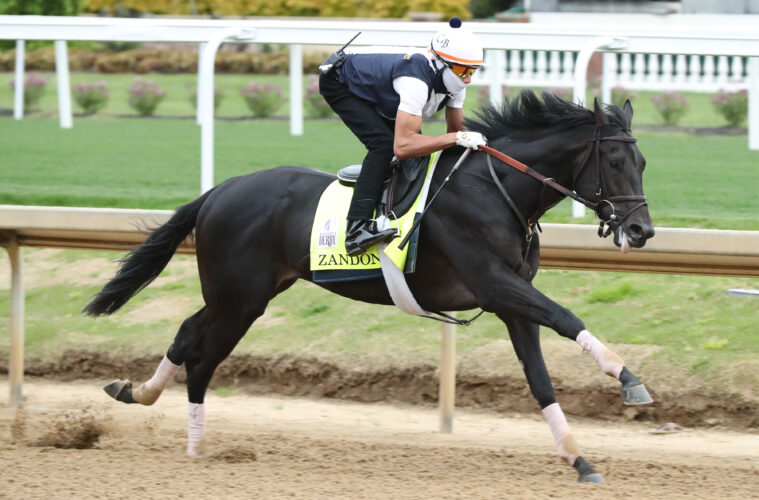 Jeff Drown’s Zandon, authoritative winner of the Blue Grass Stakes (GI) in his most recent start, has been installed as the 3-1 morning-line favorite in a field of 20 horses plus two also-eligibles entered for Saturday’s 148th running of the $3 million Kentucky Derby Presented by Woodford Reserve (GI).

The Kentucky Derby, with live coverage provided by NBC from 2:30-7:30 p.m. (all times Eastern), will go as the 12th race on Saturday’s 14-race program that features eight stakes. Post time for the Derby is 6:57 with first post time Derby Day being 10:30 a.m.

Trained by Chad Brown, Zandon notched his first stakes victory at Keeneland in the Blue Grass with Flavien Prat aboard for the first time. Prior to the Blue Grass, Zandon had finished third behind Epicenter in the Risen Star.

Prat will be seeking a second Derby victory to go with Country House in 2019. He and Zandon will break from post position 10.

Winchell Thoroughbreds’  Epicenter is the 7-2 second choice on the morning line.

Trained by Steve Asmussen, Epicenter broke his maiden at Churchill Downs in his second start last November and this winter dominated at Fair Grounds with a victory in the Gun Runner that was followed by a narrow defeat in the Lecomte (GIII).

Joel Rosario, who has been aboard for Epicenter’s past three starts, has the call Saturday as he seeks a second Derby victory to go with the triumph aboard Orb in 2013. Epicenter will break from post position three.

Winner of the Santa Anita Derby (GI) in just his second career start, Taiba will be trying to become the first horse to win the Kentucky Derby in just his third start since Leonatus in 1883.

Taiba will break from post position 12 and be ridden by two-time Derby winner Mike Smith. Smith won the 2005 Run for the Roses on Giacomo and the 2018 renewal on Triple Crown winner Justify.

Trained by two-time Kentucky Derby winner Todd Pletcher, Mo Donegal will be ridden by Irad Ortiz Jr. and break from post position one.

Pletcher, who won the Derby in 2010 with Super Saver and in 2017 with Always Dreaming, will have two other starters in the race in Whisper Hill Farm’s Charge It and Sumaya U. S. Stables’ Pioneer of Medina.

Trained by Saffie Joseph Jr., White Abarrio will break from post position 15 and be ridden by Tyler Gaffalione.

In addition to Pletcher, three other trainers will be trying to add to their Derby victory totals.

Two-time winner Doug O’Neill, trainer of I’ll Have Another in 2012 and Nyquist in 2016, will send out Calumet Farm’s Happy Jack (30-1). Rafael Bejarano has the mount and will break from post position two.

Brad Cox and jockey Florent Geroux, who teamed up to win the 2021 Derby with Mandaloun, are back with Gold Square’s Arkansas Derby (GI) winner Cyberknife (20-1). Cyberknife will break from post position 16.