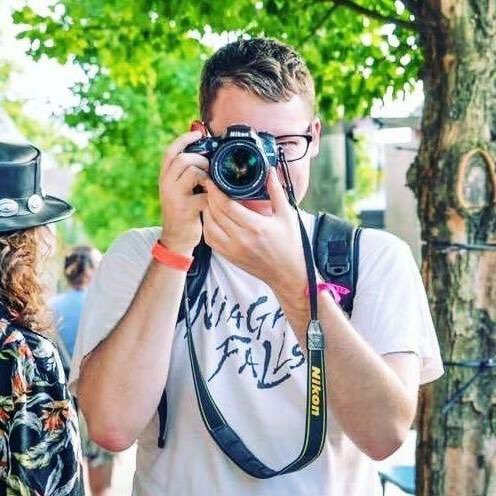 People of the Ville: Jared Anderson 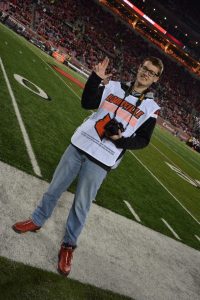 Where you from? And what HS did you attend?

Born and raised in Louisville, KY.  Graduated from Louisville Male High School in 2012.

How did you end up in the band at UofL?

Started band in 5th grade at Audubon Elementary, then I went from JCTMS to Male and eventually after my senior year I was 3rd in the state on my instrument (Euphonium).  I got a pretty solid scholarship from the music school here at UofL for that. Started in music education and then kind of changed it up late in my career into a Bachelor of Arts and Music with a minor in Communication and that’s when the sports really started to kick in.  I was at all the sports with band whether it was marching band at football/pep band goes to all the other athletic events at UofL, so I started to get familiar with all the sports and followed pretty heavily outside of band and going to games/cheering as a fan.  I didn’t spend too much time as a fan though because then the media stuff started to pick up shortly after band ended for me.

How did your sports career blossom to what it is today?

I started Tball at a young age as well as a few other recreational league sports such as swim team, football for a year, basketball for a year, and I played volleyball with church.  Baseball is the only one that continued until I was 15 or 16 years old.. I started score keeping and umpiring as my first job.

When did you start doing photo seriously??

I picked it up shortly after leaving one fan site to create River City Cards.  I took some classes that were tied to the Louisville Cardinal, the student paper on campus.  At the time, they let me borrow a camera for a few things, video or photo.  I thought it was cool and found my own cameras to invest in on Amazon.  I got better lenses and battery packs and as I’ve grown, gifts from friends and family have helped.  My Christmas list in 2017 was all photo related.

I feel like in the last year, it’s all really picked up for you and your site..

We went from game by game passes to now, I have an official media pass and I can get access to just about any sport.  One of the sports I follow the most is softball and I’ve been with them for 4  or 5 years now which is exciting for me its similar to baseball but faster paced.. the games don’t last as long in the fall.  Since I’ve become a college student, I’m become for familiar with soccer and then that branched off into field hockey and lacrosse, a little bit of swim here and there & tennis as I start to understand some other sports as well.

It’s gone so far, that players are starting to follow you, look for their pictures, ask you for specific photos.  You do shoots outside of sports, some senior photos, workout photos, is it turning into a business?

I try to broaden my range a little bit… I wouldn’t say its enough to make it a business but you’ve got to start somewhere, you’ve got to pursue it, you’ve got to keep pushing.  I didn’t expect a lot of big things off the bat but there’s a few benefits here and there and I can go to friends to build a portfolio, I’ve gone to the Zoo and the animals make pretty good subjects, as well.  My main thing is sports.

Some of the athletes will tag me in their posts so its cool that a lot of them are starting to recognize me and that they expect to see pictures out there.  But unfortunately with some NCAA compliance things I can’t send pictures directly to athletes so I do post them out there at others places like photo galleries and albums and people are welcome to go to those sites and take the photos from there.

How does that work?  Did someone reach out to you and say what you can’t do or did you check on your own?

I did research once we got our media credentials just to make sure everything was going to be in compliance whether it was press box related and for me being on the field, I’m a lot closer to the players and actually interact with the players.  Also, by following sports with band, I was friends with a few of the players here and there and had to make sure what was allowed, what I could do and what i couldn’t do and there’s a lot of small tiny things here and there that can add up to a violation.

Do you have any projects you’re working on that you want to share with us?

I’m trying to grow the fitness style shoots… I thought those were fun.  Which is another obstacle sometimes because you cannot actually go into a gym and take photos with other people around.  So you have to go to other locations and we do poses to focus on muscles groups that those people can then use in their own career endeavors and they can spread the word so it’s a benefit for all of us.

You can find Jared on the sideline and or in the background of any broadcasted UofL game.  He also appears regularly on Cardinal Couple Radio.