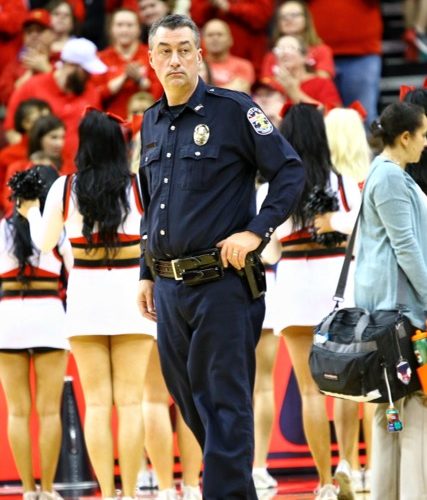 People of the Ville; Pete Pastin

Are you from Louisville?

No, born in Chicago but I’ve been here since I was about 7 years old. My dad’s work brought us here.

Did you grow up a Cards fan??

Did you go to UofL? What year did you graduate?

Do you have family here?

I do, I have 2 daughters one in high school and another in grade school.

Do you sign up or do they request you personally?

Are you at most UofL games? How does that work out?

Its extra work, UofL contract with the city to get some extra opportunity to work the games.

How long have you been working the games for UofL?

Have I seen you working Louisville Bats games as well?

Yes, I do those games as well… I kinda like ‘the sports guys’.

What are game-day’s like for you?  Are you busy during the day as well?

Yeah I work in the training department.  I’m in the PTO Special Projects.. it after they get out of Basic Academy before the go solo.  We get here about 2 hours before the game starts, I meet the visiting team at the loading dock and we get them into their locker room and i follow them around the stadium.. wherever the head coach goes to meet the media to press conferences and anywhere in the game.

So you get to meet a lot of cool people, what are a couple of the more memorable moments?

I have… I worked the Final Four when it was here, (the regional) when Kansas and Bill Self and also when Dwayne Wade was with Marquette, we took him around to media and stuff.  All of the Shoni Schimmel years were great because the team wasn’t great when I started, we were over at Freedom Hall and to watch them grow to what they are now (at the time of this interview) #3 team in the country, the crowd sizes keep growing and then some of the same fans come to every game and I get to know them… such as the people who sit behind the bench.

You don’t travel with the team do you?  How long are game-day shifts?

No I do the men’s and women’s game in town. Shifts are about 5 hours long.

I want to thank Pete for his 5 minutes for this interview and the many nights and weekend hours he dedicates to not only the Louisville community but to those who visit us in friendly competition.