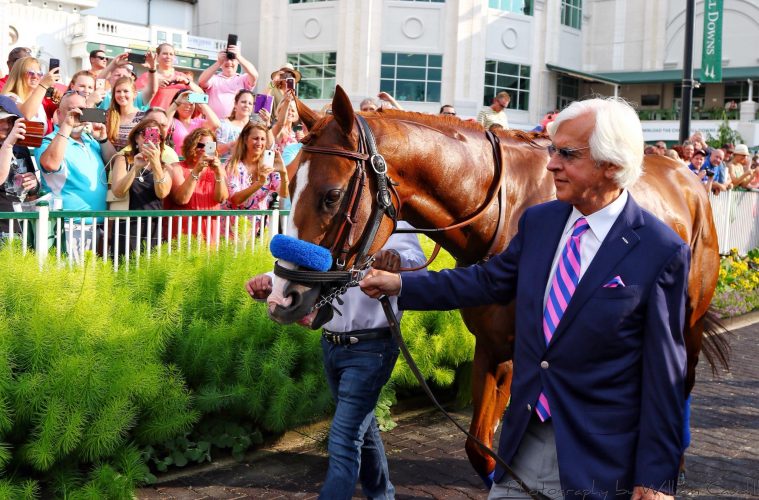 Again……Everyone knows Bob Baffert’s reputation. He’s won 5 Kentucky Derby’s, 7 Preakness Stakes, AND 3 Belmonts, AND 2 Triple Crowns AND 10 Breeders’ Cup Races AND 3 Dubai World Cups. He’s in the Hall of Fame and will go down in history of one of the world’s best all-time trainers. Enough said.

Irad Ortiz is one of the top riders in North America and is mostly based in New York. Irad is just 26 years old, but he’s been one of the leading riders in New York since 2012. He won the Belmont Stakes aboard Creator (for WinStar Farm) and has won 6 Breeders’ Cup races during his career. He already owns over 2000 career wins and was awarded the Shoemaker Award for “Most Outstanding Jockey” at the 2018 Breeders’ Cup at Churchill Downs when he won 2 of the BC races.

WinStar Farm, China Horse Club & Starlight Racing are the ownership syndicate that produced Triple Crown Champion Justify a year ago. WinStar Farm is an elite racing operation in Versailles with 2400 acres and all the resources anyone could want in horse racing. China Horse Club is relatively new operation, but has an extreme enthusiasm for racing and resources to match. The China Horse Club has won 31 Grade I races in six years. Starlight Racing is a local Louisville, KY operation with high-level success as well with 51 graded stakes wins (24 G1s). This group of owners also partnered on last year’s Kentucky Derby 3rd place finisher Audible.

The connections are one thing. The horse runs the race. Improbable is an impressive horse. His Equibase speed ratings are as strong as you’ll see in the field (98, 104, 103, 109, 108) and they are consistent. I like knowing that Improbable is going to give his best effort each race. I also like that Improbable has won on multiple tracks including at Churchill Downs when he won the Street Sense Stakes on the Breeders’ Cup under card this past November. Improbable was impressive in the Street Sense winning by 7 with Drayden Van Dyke in the saddle and dominated the Los Alamitos Cash Call Futurity by 5.

To start his 3-year old season Baffert pointed Improbable to the Rebel Stakes following a 3-month layoff. Van Dyke steered Improbable off the pace but was 4-wide in the final turn of the Rebel and appeared to have the race put away until Long Range Toddy came up and beat him by a neck.

Baffert moved DVD off Improbable and opted for Jose Ortiz in the Arkansas Derby. Improbable was loaded 1st in the gate of the Arkansas Derby and was in the gate for nearly 3 MINUTES(!) before the race. He was agitated from the beginning in the gate and Improbable ran out of patience in the starting gate causing several flare ups and eventually he did back out of the gate and was re-loaded. Baffert lamented the gate experience at Oaklawn on “Inside Churchill Downs” on ESPN680 on April 19th and was critical of the timeliness that day. The race itself, Improbable was mid-pack to start after eventually being able to break from the #1 post. Ortiz moved Improbable up the back stretch easily and began to challenge Omaha Beach around the far turn and it was a stretch duel that Improbable just came up short and never could get by Omaha Beach on the sloppy track.

Better gate behavior/gate management, a fast track, a better break might have been the difference for Improbable in Arkansas. That’s horse racing. Watching the film it’s clear that Improbable is an incredibly talented horse, but in this field small things can turn into the difference makers on a given day. Improbable fell victim to that in Arkansas. To be a Kentucky Derby champion he’ll have Irad Oritz on him for the 1st time and will undoubtedly have to overcome some obstacles to get to the wire first…. like every other horse in the field.

My Final Take on Improbable

Improbable is a must-use horse. Some might try to fade him given his 3-year old campaign, but I won’t be able to be one of those people. He’s too talented, he’s got the best trainer on earth with one of the world’s best riders. In the Rebel I think Van Dyke did the same thing Joel Rosario did on Game Winner in the Santa Anita Derby and just power through the race wide the entire way around. Sometimes a jockey can be overconfident on his horse and often times that will work. But at this level the rider is going to have to find each horse every advantage. In the Arkansas Derby, Improbable had some bad luck that was out of his control… and some seasoning in the gate might improve too. I’m not going to count out this horse…. or its connections.