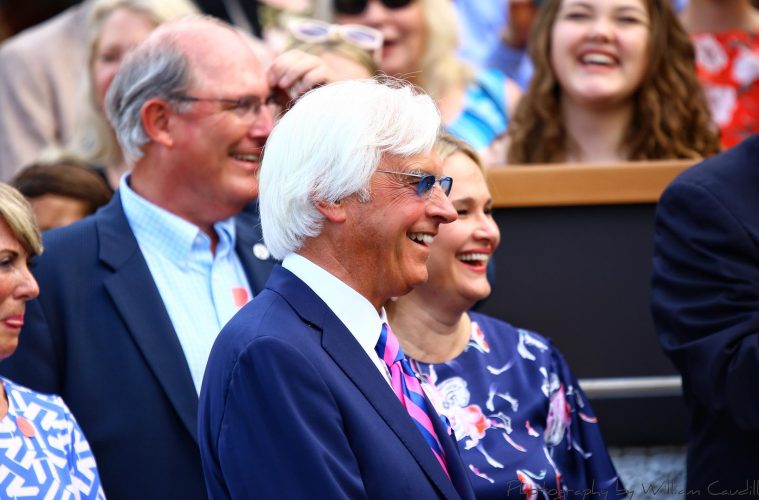 Roadster is out of Quality Road colt trained by Hall of Famer Bob Baffert will be ridden by Florent Geroux and is owned by Speedway Stable.

Everyone knows Bob Baffert’s reputation. He’s won 5 Kentucky Derby’s, 7 Preakness Stakes, and 3 Belmonts…… and 2 Triple Crowns…… and 10 Breeders’ Cup Races….. and 3 Dubai World Cups. He’s in the Hall of Fame and will go down in history of one of the world’s best all-time trainers. Enough said.

Florent Geroux has been riding at Churchill Downs as one of his home tracks for several years now and has been on some of the world’s best horses during his career. Still Flo has yet to win a race in the Triple Crown Series despite winning the Kentucky Oaks and 4 Breeders’ Cup Races (including the Classic). Significant horses for Geroux include Gun Runner and Monomoy Girl. Florent rode Gun Runner to a 3rd place finish in the Kentucky Derby in 2016.

Speedway Stables has had its share of Grade I success with Hard Not to Like, Noted and Quoted, and Collected. This group has been winning Graded Stakes since 2015 and while they aren’t a HUGE operation they are successful.

Roadster has talent and he has improved his Equibase figures in all 4 of his career starts (90, 96, 104, 106). He’s shown his ability to improve and be consistent and the only hiccup of his career thus far was the Del Mar Futurity where he lost to Game Winner by 2 lengths. Roadster had throat surgery following the Futurity to clear a breathing issue was able to win over Nolo Contesto in his return and then beat another Baffert trainee in Game Winner in the Santa Anita Derby.

It’s easy to say “Problem” corrected and declare Roadster the King of California, but Roadster does have some issues. He’s lightly raced, he’s had Mike Smith aboard for all 4 of those races, he’s only raced against more than 6 horses in a field ONCE in his career (maiden).

I do like Roadster’s ability to close, he doesn’t need the lead, can be tactical and packs a lot of punch into the lane. The Baffert trainee won’t have any fitness issues and Geroux is a top rider so it’s hard to take issue with Roadster’s chances to win the 145th Kentucky Derby.

My Final Take on Roadster

I’ll use Roadster in my Pick 5 and exotics. I am concerned with the jockey change and the fact that he will need some luck to weave in and out of lanes in the Derby since he is unlikely to be on the lead. But the horse can run and win the race. Speedway Stable spent $525,000 on this colt and while I did like Game Winner’s 2nd place run in the Santa Anita Derby better than Roadster’s winning effort the object of the sport is to get to the wire first….. and Roadster was able to do that.