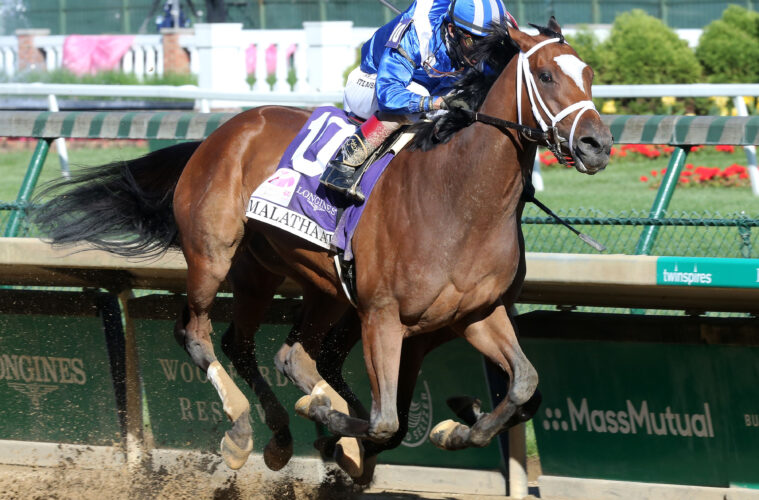 Shadwell Stable’s Malathaat edged Search Results by a neck after a stretch battle of undefeated fillies to win the 147th running of the $1.25 million Longines Kentucky Oaks (GI) for 3-year-old fillies before a crowd of 41,472 on a sun-drenched Friday afternoon at Churchill Downs.

Trained by Todd Pletcher and ridden by John Velazquez, Malathaat covered the 1 1/8 miles on a fast main track in 1:48.99. The victory is the fourth in the Oaks for Pletcher and the second for Velazquez.

Pletcher’s previous victories came with Princess of Sylmar in 2013, Rags to Riches in 2007 and Ashado in 2004, the latter with Velazquez aboard.

Travel Column and Moraz led the field of 13 through opening fractions of :23.60 and :47.47 and 1:11.21 as Search Results with Irad Ortiz Jr. aboard tracked in third and Malathaat a bit further back in fifth.

Nearing the final turn, Travel Column disposed of Moraz but was soon joined by Search Results to her outside and Malathaat three-wide.

By the three-sixteenths pole, the battle was down to Search Results with her perfect 3-for-3 mark on the line against Malathaat who entered the Oaks 4-for-4. Malathaat stuck her neck in front but Search Results refused to yield as they dueled to the wire.

The victory puts Pletcher and Velazquez in position to make some history Saturday in the $3 million Kentucky Derby presented by Woodford Reserve (GI).

Seven riders have won the Oaks and Derby in the same year with the most recent being Calvin Borel in 2009.

Malathaat is a Kentucky-bred daughter of Curlin out of the A.P. Indy mare Dreaming of Julia. The victory was worth $713,000 and increased Malathaat’s earnings to $1,125,150 with five wins in five starts.

Completing the field in order were Clairiere, who was a nose back in fourth, Travel Column, Millefeuille, Maracuja, Pauline’s Pearl, Coach, Crazy Beautiful, Moraz, Pass the Champagne and Competitive Speed.

Churchill Downs Incorporated (“CDI” or the “Company”) (Nasdaq: CHDN) announced today that the 147th running of the $1.25 million Longines Kentucky Oaks (Grade I) at Churchill Downs Racetrack (“Churchill Downs”) saw Malathaat capture the Lillies in a field of 13 under sunny skies and fast track conditions in front of 41,472 spectators spread across the expansive and spacious grounds of the racetrack.

Malathaat, owned by Shadwell Stable and bred in Kentucky by Stonestreet Thoroughbred Holdings LLC, rallied from a stalking position and held off a determined filly, Search Results, to win the Longines Kentucky Oaks by a neck at odds of 5-2 in a final time of 1.48.99. This win marks the 4th Kentucky Oaks victory for trainer Todd Pletcher and the 2nd for jockey John Velazquez. Malathaat is a daughter of Curlin out of Dreaming of Julia and now has lifetime earnings of over $1.2 million.

“Today we celebrate Malathaat and her connections, but also the fans who joined us to enjoy this beautiful day of racing,” said Churchill Downs President Mike Anderson. “The success of the 147th Kentucky Oaks is a tribute to the team at Churchill Downs, our community partners, sponsors and participants who worked tirelessly to ensure that we could safely and responsibly welcome back the fans that are an essential part of this great tradition.”

CDI continued the tradition of using Oaks day as a platform for the Company’s charitable initiatives. This year’s virtual Kentucky Oaks Survivors Parade presented by Kroger with supporting partner Ford, honored survivors of breast and ovarian cancer along with honorees who are actively receiving treatment with a moving video montage accompanied by a live performance by vocalist Shea Leparoux, wife of seven time Breeders Cup Championship jockey Julien Leparoux. The tribute was concluded with an honorary lap around the racetrack by the Norton Healthcare Mobile Prevention Unit. CDI has contributed over $1 million to charitable partnerships dedicated to the early detection and prevention of breast and ovarian cancer. The five-year charitable partnership with Louisville-based Norton Healthcare extended this year to also celebrate Norton employees who volunteered to staff a public vaccine clinic at Churchill Downs in late March and early April.