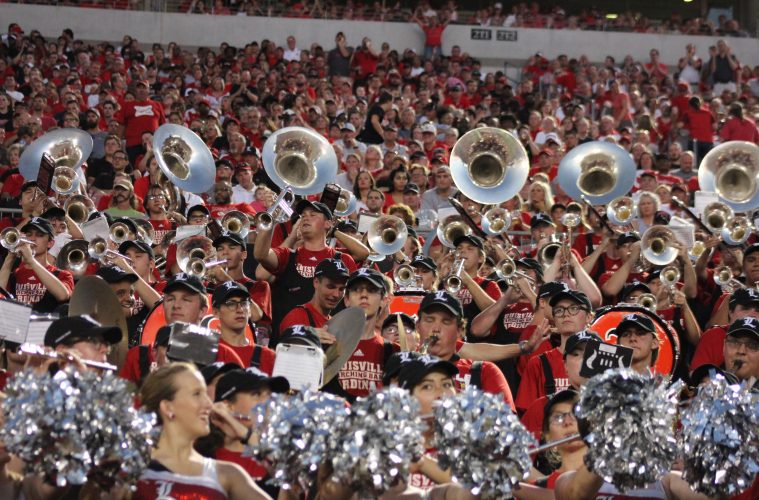 Marching Cards to perform ‘My Old Kentucky Home’ at Derby


By ALICIA KELSO – UofL has many ties to the Kentucky Derby, but perhaps none as deep as our Marching Cards’.

Since 1936, the group has served as “The Official Band of the Kentucky Derby.” What this means is that on the first Saturday of every May just prior to the Most Exciting Two Minutes In Sports, our students’ rendition of “My Old Kentucky Home” is showcased to about 150,000 people at Churchill Downs and an additional 15 million television viewers across the world. By the time the band is finished playing, there aren’t many dry eyes left.

A Courier Journal columnist described this experience best this week: “I’ve interviewed Kentuckians who haven’t set foot in the state for 30 years who still stand in front of their televisions and weep when they hear the woodwinds and brass instruments strike the first few notes of ‘My Old Kentucky Home.’ The lyrics tell us that there’ll be hard times, by and by. But at the crescendo, it’s as if 150,000 voices nudge us to weep no more.”

Those are our students playing those woodwinds and brass instruments and evoking such emotion, courtesy of Stephen Collins Foster’s lyrics. Such an experience is not lost on the group.

“Hands down my favorite part is hearing everyone sing at Churchill Downs. When the song begins, voices are a bit subdued, but then a strong rise of voices is heard on ‘Weep no more my lady.’ It is a powerful and unifying event that makes you feel connected to people all over the world and so proud to live in Kentucky,” said Amy Acklin, associate director of Bands and director of the Cardinal Marching Band.

This Saturday will mark her 12th year with the band, eight of which have been as director and four spent as a student. This year will also mark year 24 for Dr. Fred Speck, UofL’s director of Bands, and year three for Dr. Jason Cumberledge, assistant director of Bands.

It’s not just the directors who appreciate the experience, either. Natalie Humble, a sophomore from Monticello, Kentucky, performed at the Derby as a trumpet player last year and will move into the drum major role this year. She calls the opportunity to play the Derby “surreal.”

“Traveling to (football) games is a unique experience in the fall, but there is nothing more special than having an opportunity like this right where we are,” she said. “It is entirely unique to the Cardinal Marching Band. Having that legacy of performing ‘My Old Kentucky Home’ is something you can only gain through the CMB – that’s the most special part.”

Acklin adds that having the unique opportunity to be part of this tradition is a privilege.

“It’s pretty incredible to know that literally thousands of UofL alumni, whom you’ve never met, are cheering you on and grateful for your service in continuing this important tradition,” Acklin said. “Having this singular honor for over eight decades is a testament to the commitment from the community and the dedication of the band and its alums.”

As for his perspective, which spans more than two decades, Speck simply passed along his favorite quote from famed sports commentator Jim McKay in 1999:

“It offers a moment that exists nowhere else in sports … when the horses come on the track and you see the silks on the jockeys and the tan of the track and the blue of the sky. Then they start playing that song, ‘My Old Kentucky Home,’ and you can’t explain why, but it doesn’t matter if you’re from Kentucky or England or Timbuktu, it brings a tear to your eye…”