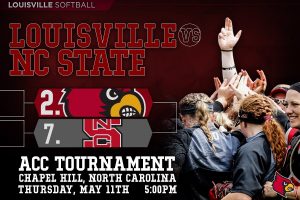 The Cards swept the Wolfpack over Derby weekend.  Senior Maryssa Becker had three hits, drove in three runs and picked up the win in the circle.  Becker (22-10) struck out nine and held NC State scoreless while scattering five hits in 4.2 innings of relief and helped her cause at the plate with three RBIs. Junior Nicole Pufahl had two hits, including a two-run homer and scored twice.  With her performance in the circle, Becker moved to second in Louisville’s record book with 625 career strikeouts. Hensley combined on the shutout, getting the start in the circle and tossing 2.1 innings and surrendering five hits.

Peyton Silverman (12-23) took the loss, allowing four earned runs on six hits in three innings. Compton went 3-for-3 to lead the Wolfpack at the plate.

“I’m really pleased with how we played today and completed a sweep against a gritty, hard-hitting NC State team,” said UofL head coach Sandy Pearsall. “I’m happy with how we completed the regular season. Coming in second in the conference certainly was a testament to the determination and hard work of our players and our staff.”

Below are the links for the championship page as well as the RSN and ACC Network links for game one. The last link has the coverage throughout the tournament.