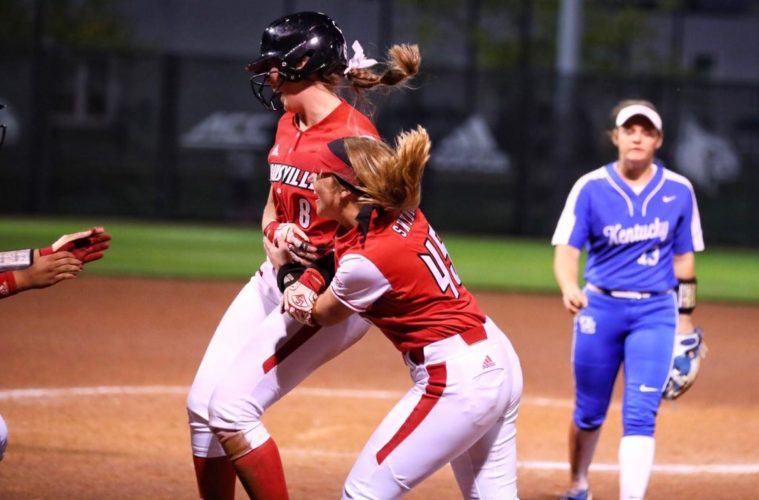 The rivalry matchup began with a ceremony to dedicate the naming of the field at Ulmer Stadium to the late Don Dobina. Dobina was well-respected in the local softball community as he founded the Louisville Lady Sluggers Softball Club which traveled nationally and won several national championships. When Ulmer Stadium looked to expand in 2013, Dobina was the lead donor of the project. Don’s wife, Susan, his daughter Shae and her husband Michael, his son, Brad and his wife Sarah and Don’s granddaughter Elin along with Athletic Director Vince Tyra were on the field for the unveiling in front of 1,254 fans.

Put your feet up #Cardnation because this one was a wild ride. A roller coaster that featured 22 hits, was 2 hours 40 minutes long and perfect 79 degree weather where the Cats clawed their way back in to tie it up and the Cards gloriously come out on top. It was a back-and-forth game that featured four lead changes and two ties, UofL snap a three-game losing streak to the Wildcats and bring the overall series record to 20-20.

Midweek matchup vs Kentucky – W 8-7
Sophomore RHP, Danielle Watson (8-11) got the start in the circle for the Cards. After giving up 3 hits and 3 runs through 1.1 innings of work, Coach Aprile pulled her for RS Freshman Taylor Roby to manage the mound.
The Cards and the Cats were tied 2-2 after 1 complete inning. Watson walked 2 and the defense would load the bases early. A hit over 3B would score 2 runs for UK. Watson struck out 2 and a ground out would end the scoring threat with 2 left on base.
In the bottom of the first, lead off hitter Celene Funke hit a grounder to deep SS and was able to beat the throw to arrive safely at first base. Hear me now when I say that Funke was itching to advance the entire game. She quickly stole 2nd and 3rd base in Sidney Melton’s at bat. Melton caused the Cats to commit their first 2 defensive errors of the game in her first 2 appearances at the plate. To start, a hard hit grounder at the SS was bobbled off the glove allowing the speedy lefty Melton to reach 1st base to put runners on the corners for the Cards and Megan Hensley heading to the plate. Hensley dropped one in between the third baseman and left fielder and advanced to 2nd base on the throw home as Funke put the Cards on the board with nobody out. An out corralled by the Cats followed by a brilliantly placed bunt from Chung would see Melton dive head first into home and tie up the ballgame. The Cards left the bases loaded in the bottom of both the first and second innings.
After giving up another hit to the Cats, allowing the runner to advance and score on multiple wild pitches and 2 walks, Coach Aprile relieved Watson for Taylor Roby in the circle with the bases loaded, 1 out and the Cats up 3-2.
Roby took a grounder back to Chung at home for the second out and Melton fielded one from 3B over to Maddy Newman at 2B as momentum pulled her there to end the inning. It was a bang bang play and it was beautiful.
Bottom of 2… Newman walks to get on base and we head back to the top of the lineup… Funke. And here she goes.. triples to left center field just out of the CF reach and like I said, when shes rolling… shes rolling. With her 10th triple of the season, Funke moves into a tie for first with Audrey Rendon (2005) on Louisville’s single-season list with 10. She also takes sole possession of the NCAA’s current triples lead. She would score unearned on the previously mentioned second error by the Cats in Melton’s second at bat to put the Cards ahead 4-3 in the game. UK then called for a pitching change and the first two innings would take 1 hour to complete.
UK answered in the top of the 3rd inning on an almost double pickle to tie the score 4-4 and Roby took a line drive back to her to send the Cards back to the dugout.
With 2 out in the bottom of the 3rd… Funke with the 0-2 count singles to CF and steals 2B in Melton’s at bat. The two would trade places on a back to back hits to CF. Funke would beat the throw home for the first time in the game from the center fielder in blue. Megan Hensley follows with a 220 foot triple to RCF that was 5 feet from clearing the fence to score Melton and put the Cards up 6-4. Enter Taylor Roby.. She follows suit with a practically identical hit to CF just 5 feet shy of clearing the fence for a triple of her own and the Cards now up 7-4 on UK heading to the top of the 4th.
With 2 outs, Roby gave up a 230 foot homerun to LF as the Cats inched closer 7-5. The game scored remained until the top of the 7th with Watson returning to the circle for UofL in the top of the 6th.
In the top of the seventh, nobody out UK would single, double and fly out to Funke in CF to score 2 runs, one sacrificed to tie the game 7-7.
To the bottom of the 7th, with one out Funke and Melton both singled to get on base. With 2 outs, Taylor Roby takes an 0-1 count to short CF and you guessed it… Celene Funke beats the throw from the center fielder in blue, leaves the catcher in the dust and crosses the plate. She joyfully punches the backstop, climbs it and falls into the net of home fans below to celebrate an 8-7 walk off win.

Roby (11-1) picked up the win in the circle after giving up two earned runs on five hits and striking out one in 3.2 innings of relief. Funke led the Cardinals offensively, going 4-for-5 with three stolen bases and tied a school record with four runs.