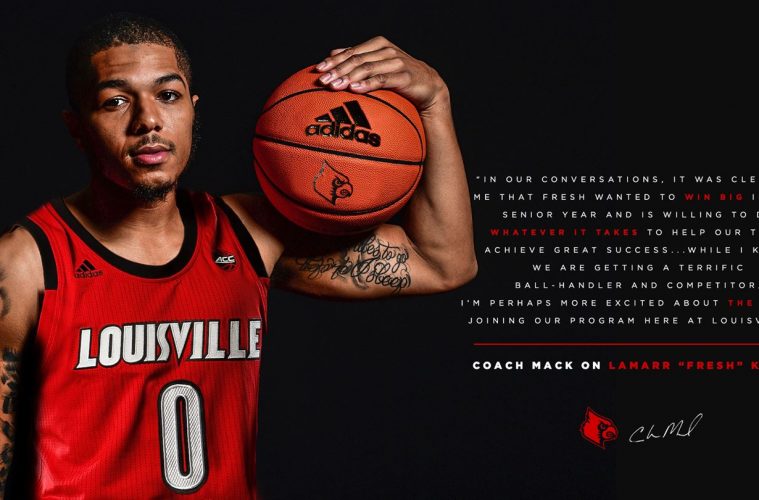 Lamarr Kimble, a three-time captain and two-year starter at Saint Joseph’s University who scored over 900 points and handed out over 260 assists, has signed a financial aid agreement at the University of Louisville to play his final collegiate basketball season with the Cardinals.

“We are thrilled to add an experienced point guard in Lamarr “Fresh” Kimble,” said UofL Men’s Basketball Head Coach Chris Mack. “In our conversations, it was clear to me that Fresh wanted to win big in his senior year, and is willing to do whatever it takes to help our team achieve great success. Being a three-time captain at St. Joe’s spoke loudly to me on how his former teammates and coaches feel about Fresh’s leadership capabilities. So while I know we are getting a terrific ball-handler, and competitor, I am perhaps more excited about the person joining our program here at Louisville.”

A 6-0, 180-pound guard from Philadelphia, Kimble totaled 908 career points, 265 assists, 111 three-point goals in his career with the Hawks while connecting on 73.5 percent of his career free throws (211-of-287.  Nicknamed “Fresh,” he is the only player in Saint Joseph’s history to serve as captain for three years.  The graduate transfer student-athlete has scored in double figures in 52 career games.

As a redshirt junior in 2018-19, Kimble, was the Hawks second-leading scorer with a 15.6 average, despite missing 10 games with a hand injury. An All-Big 5 second team selection, he scored in double figures in 20 of his 23 games for the season and was second on the team with 2.8 assists per game.

Kimble scored a career-high 31 points twice last season against both West Virginia and Illinois Chicago, when he scored 24 of his 31 in the second half.  He handed out a career-best 10 assists with 25 points against Dayton in 2017 for his first career double-double, one of five occasions he has produced eight or more assists in his career.

He missed all but one game in the 2017-18 season with a foot injury suffered in the season opener.  Kimble led St. Joe’s in scoring (15.5 ppg) and assists (4.5 apg, 7th in the Atlantic 10) as a sophomore in 2016-17.  He was selected to the Atlantic 10 All-Rookie Team in 2015-16 as Saint Joseph’s won the Atlantic 10 Championship and reached the second round of the NCAA Tournament with a 28-8 record.  He averaged 6.0 points and 2.5 assists per game as a freshman and handed out a season-high nine assists in the A-10 title game victory over VCU.

Before his time at St. Joe’s, Kimble averaged 14-5 points as a senior in 2014-15 in helping Neumann-Goretti High School in Philadelphia to a 28-2 record and its second straight PIAA Class AAA state championship, and fifth in the previous six years.  He earned first team All-Catholic League, Pennsylvania Sportswriters All-State Class AAA and All-USA Pennsylvania honors.

Kimble joins to a stellar group of six freshmen that signed with the Cardinals in November, adding to a recruiting class that has been ranked second in the nation by ESPN.com and fifth by Rivals.com and 247sports.com. The list list of impressive freshmen signees includes Aidan Igiehon, a 6-10, 230-pound forward from Dublin, Ireland and Lawrence Woodmere (N.Y.) Academy; David Johnson, a 6-5, 180-pound guard from Trinity High School in Louisville; Josh Nickelberry, a 6-4, 175-pound guard from Northwood Temple Academy in Fayetteville, N.C.; Quinn Slazinski, a 6-8, 200-pound forward from Houston and Huntington (W. Va.) Prep; Samuell Williamson, a 6-7, 190-pound guard from Rockwall (Texas) High School; and Jae’Lyn Withers, a 6-8, 215-pound forward from Charlotte, N.C. who played his final season at Cleveland (Ohio) Heights High School.