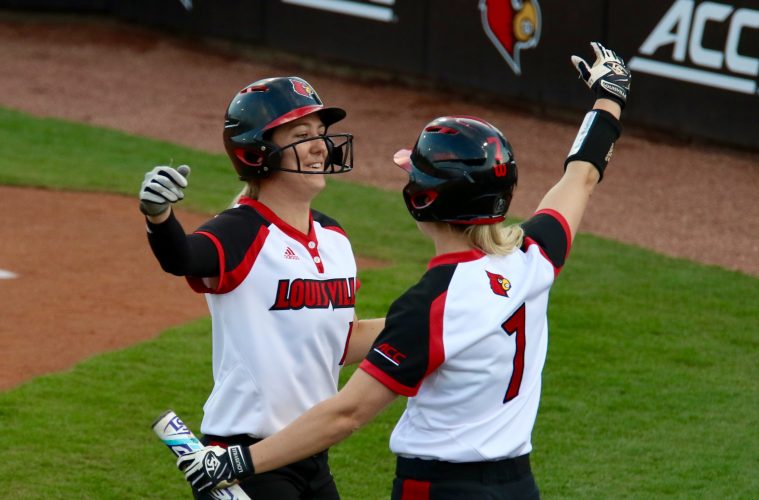 TheCrunchZone.com’s William Caudill was on hand for Louisville’s 2-1 victory over the Indiana Hoosiers on Wednesday night.

With her team trailing 1-0 in the fifth, junior Nicole Pufahl delivered a two-run single to lift the University of Louisville softball team to a 2-1 win over Indiana. Senior Maryssa Becker (15-5) surrendered one earned run and struck out five and did not walk a batter while scattering two hits in a complete game effort to get the win in the circle.

“When we got some runners on, we were able to do something,” said UofL head coach Sandy Pearsall. “I thought Nicole did a great job at that at bat… She was calm in there, she took the pitches that she should take and then she capitalized on it. She didn’t try to do too much, she just did what she needed to do, a base hit up the middle scored two runs easily for us.”

Louisville (20-8, 4-0 ACC) returns to action this weekend when the Cards host Notre Dame in a three-game ACC series April 1-3. Games two and three of that series will be televised on ESPNU with Monday’s finale featured as part of ESPN’s ACC Monday.

After two scoreless innings, the Hoosiers (16-16) broke through in the top of the third when Aimilia McDonough led off the frame with a single and moved to second on Bella Norton’s sacrifice bunt. Katie Lacefield’s base hit put runners on the corners and she proceeded to steal second. One out later, Rebecca Blitz hit into a fielder’s choice which sent McDonough home.

The Cards broke through in the fifth when senior Morgan Meyer delivered a leadoff hit and an error on freshman Caitlin Ferguson’s sacrifice bunt attempt put two runners on for junior Jamie Soles who followed with a sac bunt of her own to move both runners into scoring position with one out. Becker was intentionally walked to load the bases. Pufahl stepped up to the plate and ripped a hit to centerfield, which plated Meyer and pinch-runner freshman Celene Funke to put the Cards on top 2-1.

Tara Trainer (8-9) took the loss, allowing two runs, one earned, on seven hits and striking out two in six innings. McDonough and Lacefield finished the game with one hit apiece.

In addition to Pufahl’s two-RBI performance, Soles also went 2-for-2 and Meyer went 1-for-3 with a run and an RBI to help pace the Cardinals offensively.