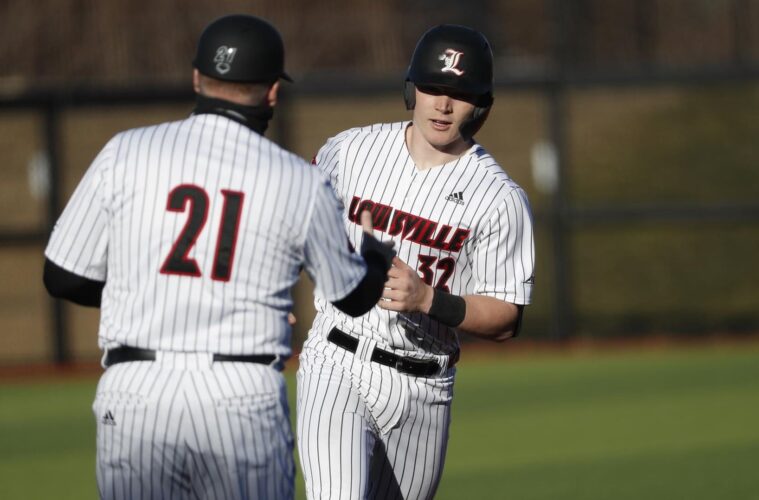 The Cardinal Nine had their first midweek matchup today as they welcomed Eastern Kentucky to Jim Patterson Stadium.

Sophomore Luke Seed got the Tuesday start and recorded his first strikeout of the season when he faced his first batter of the day. He would follow it with two more quick K’s and retire the side in order for his Louisville debut. Lucas Dunn would leadoff for the Cards and come up with nothing in the bottom of the first. Henry Davis would be the first base runner of the game after he was walked and would steal second before Binelas drew a walk to get two runners on base for Louisville. The second inning did not come so easy for Seed, who gave up a hit to his first batter faced and walked the second before getting his fourth strikeout in six batters. EKU had the bases loaded with one out in the top of the second and See would see his fifth and sixth strikeouts of the game to get the Cards out of a sticky situation.  Louisville was not able to come up with much and would end the second inning scoreless after Cooper was picked off trying to get to second base.

Caleb Corbett came to the mound in the top of the third inning for the Cards and would help keep the Colonels from scoring any runs. Bianco would head to the plate to lead off in the third and tally a single to get things started. Dunn drew a walk to give Louisville two base runners with zero outs, setting up an ideal situation for Luke Brown. When Henry Davis came to the plate, the bases were loaded for Louisville with no outs. He would hit a single to centerfield and send home two runners to give the Cards a 2-0 lead. An easy RBI from Levi Usher after drawing a walk, would send another Cardinal across the plate in the bottom of the third. Lucas Dunn was the first base runner in the fourth who came up with a one out single, but Henry Davis would step to the plate and get the RBI homerun to add two more to the scoreboard for Louisville.

We saw Carter Lohman make his season debut on the mound to start the fifth inning. He would tally two strikeouts through four batters in the bottom of the fifth. Louisville continued to hold EKU to zero runs on the day. Levi Usher led off in the fifth with a single before stealing second and then advancing to third on a wild pitch. Cam Masterman drew a walk to put runners on the corners with no outs. The Cards would get another run through with two outs before Bianco stepped to the plate and struck out. Lohman was faced with runners on first and third with two outs and a full count when he would give up a base hit to allow EKU to run two in. A Levi Usher error would advance Ludwick to third base for EKU. Brown would make the play in the outfield to give EKU their third out, but not before they cut the lead, 6-2. The Cards came up with nothing in the bottom of the sixth but were still comfortably ahead going into the seventh.

Louisville made use of their arms this afternoon and Jack Perkins made his season debut to start the seventh inning. He would complete a scoreless frame from the mound to retire the side in order. The eighth inning was slow for EKU and they would add nothing to their side of the scoreboard. Louisville would also go three up, three down in the eighth. We saw the season debut of Michael Kirian who came in to close things out for the Cards. He was able to safely finish things off to help his team improve to 4-0 on the season.

Western Illinois comes to town this weekend for a three-game series. They will kick things off on Friday afternoon at 3p.m. followed by a 1:00 game Saturday and Sunday. All three games can be seen on ACCNX.