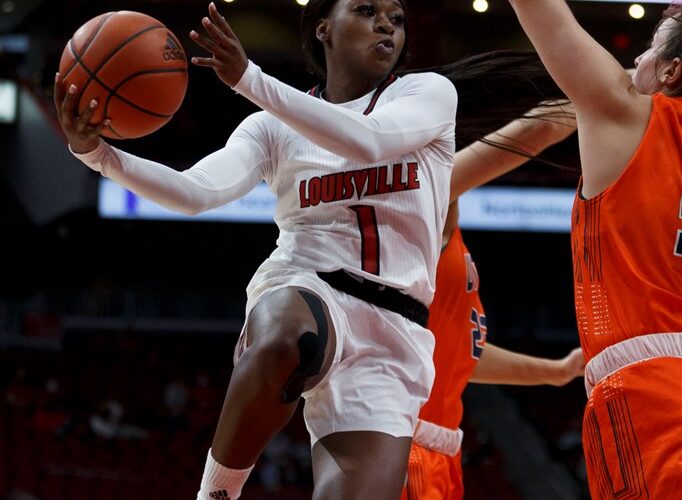 No. 5 Louisville Women’s Basketball Now 4-0 After 85-67 Victory over UT Martin

The No. 5 Louisville Cardinals were back in the Yum! Center today to face off against preseason OVC favorite, UT Martin. This was a team that took UofL to double overtime in their last meeting and came to fight again this season.

Louisville was off to a very cold shooting start going just 1-8 on field goal attempts through the first four minutes. The Skyhawks may have led early in the first period but their sloppy defense and nervous offense allowed the Cards time to settle in and regain control of the game. Hailey Van Lith continues to shine on the court with her aggressive style of play but players like Olivia Cochran and Elizabeth Balogun are as equally aggressive. Olivia Cochran recorded 6 of the team’s 11 rebounds in the first quarter, but the Cards were only leading by one point at the buzzer after going just 4-19 from the field.

Looking a little more like themselves in the second period, the Cards went on a 9-0 run before a timeout with 4:29 left to play in the half. They would end the half on an 18-3 run but only 13-37 from the field. Dana Evans, with 16 first half points, led the team in scoring and was the only player recording double digit scoring in the half. An unusual start this season for the Cards as past games have shown us far more on the offensive end. The 40-27 lead at halftime felt much closer based on the on-court performance from both teams.

Dana Evans continued to show her seniority and effortless game play in the third quarter shooting 100% from the field and 100% from downtown through the first four minutes. Improved ball movement would give the Cardinal offense the nudge they needed to extend their lead coming out of the half. At the end of the third quarter, Louisville was holding onto a 64-48 lead through explosive offense and aggressive defense. Dana Evans was dominating the court with 26 points heading into the fourth quarter, just two point shy of her career high.

Kianna Smith made her Yum! Center debut and was the second player to score double digits after back-to-back three pointers in the fourth quarter. Shooting 42% from the field, Louisville would get their fourth double digit win of the season and extend their record to 4-0. Hailey Van Lith (10), Kianna Smith (10), and Dana Evans (26) all had double digit scoring in the Cards 83-67 victory, while Olivia Cochran recorded 10 rebounds.

Coach Jeff Walz said in his post game interview that they were prepared for a different style of play against UT Martin. He went on to say that they made several common sense mistakes that they will improve on through watching film before the next game. He stated that we need Olivia Cochran and Elizabeth Dixon to continue to play inside like they have. Everyone will need to continue to progress through the season and it will take every single player to help get the team win.

The Cards will travel to Duke to open ACC play on Wednesday, December 9th at 7p.m. ET. They return home on Sunday, December 13th to face North Carolina for a 4p.m. ET game time.