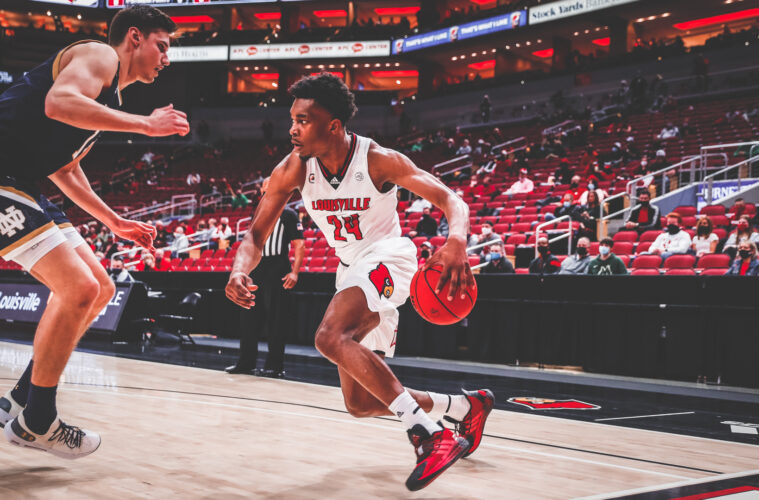 Louisville was without starting point guard David Johnson for Notre Dame with an undisclosed illness. Chris Mack’s Cards have dealt with two separate 18+ Day pauses this season and took huge losses after each of those pauses (Wisconsin, North Carolina). But UofL was able to bounce back after both of those blow-outs with a win over Pitt and then tonight vs. Notre Dame.

The Cards were led by an early rebounding advantage and renewed energy on defense to begin the game. But Louisville was carried overall by 40 minutes of ‘must have’ play from graduate transfer Carlik Jones. Chris Mack was in the unique position of having no other option at Point Guard without David Johnson & Josh Nickelberry both out with illnesses (non-COVID) and played a core of 6 players with a smattering of minutes from JJ Traynor and Charles Mineland.

It was also the 1st start of the season for Malik Williams who saw his first action on Saturday against the Tar Heels. Jae’Lyn Withers had 12 points and 13 rebounds and hit two early 3s to propel the Cards’ to an early lead.

Overall it was a solid effort for the Cards who had no rhythm Saturday vs. North Carolina. But the transition defense was back, the rebounding was back and it wasn’t a perfect game for Louisville at all, but there was a clear leap in fundamentals, effort and energy for UofL Basketball.

Beating Notre Dame Louisville may be able to steady its ship a bit for the season. The Cards saw themselves squarely on the bubble after the UNC blowout and while they still have work to do they moved to the right side of the bubble. Now the Cards have 4 days to make more improvement medically and on the court before traveling to Durham, NC to play Duke at Cameron Indoor Stadium.

From there Louisville will round out its season next week traveling to Blacksburg playing Virginia Tech and then coming back to the Yum! Center to take on the Virginia Cavaliers for Senior Night. It’s imperative that Louisville play well during these final 3 games leading into the ACC Tournament. The good news is that all 3 games represent huge opportunities for the Cardinals résumé, much like each post-season game.