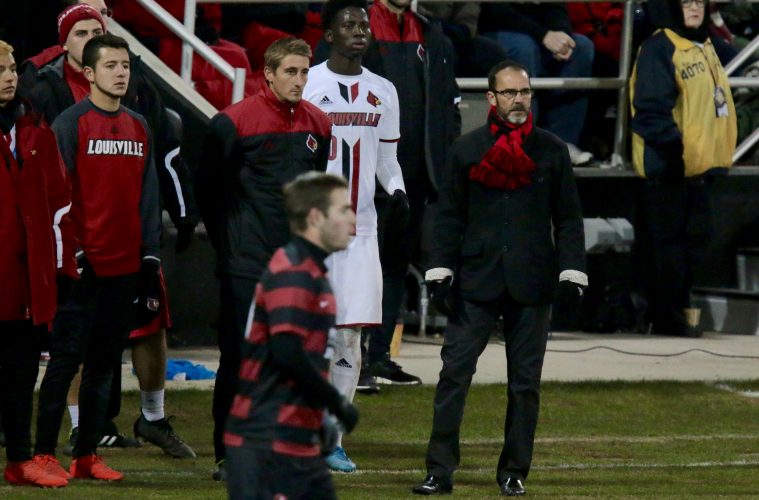 LOUISVILLE, Ky. – The University of Louisville men’s soccer team will open the 2018 season ranked among the top squads in the nation as the Cardinals landed at No. 6 in the United Soccer Coaches preseason poll released Tuesday. This marked the second straight season UofL has received a preseason top 10 ranking after being slotted at No. 9 last season.

Louisville was among seven Atlantic Coast Conference teams in this year’s preseason top 25, including five programs in the top 11. North Carolina leads the ACC with a No. 3 ranking followed by No. 5 Wake Forest, No. 6 Louisville, No. 10 Duke and No. 11 Clemson. Virginia is at No. 15 and Notre Dame is ranked 17th while reigning NCAA champion Stanford is at No. 1.

The Cardinals enter 2018 having advanced to the quarterfinal round of the NCAA Championship five times in the last eight seasons, including each of the last two. Under the direction of head coach Ken Lolla, who is in his 13th season at the helm at UofL, the Cardinals enter their fifth season in the ACC paced by the return of All-ACC performer Tate Schmitt.

The 2018 season will also be the fifth for the Cardinals at Dr. Mark and Cindy Lynn Stadium, the nation’s premier collegiate soccer venue. Louisville’s home schedule includes a pair of matches against NCAA qualifiers – No. 10 Duke on Sept. 9 and No. 11 Clemson on Oct. 20. Tickets for the 2018 campaign are on sale now and can be purchased here.

The Cardinals officially reported to campus on Monday and preseason training begins Wednesday. Louisville will compete in a pair of exhibition matches against Indiana on Aug. 15 in Westfield, Indiana and against Evansville on Aug. 18 at Dr. Mark and Cindy Lynn Stadium. The Cardinals will kick off the 2018 season against St. Bonaventure on Aug. 24 at 7:30 p.m., ET at Lynn Stadium.

2018 LOUISVILLE SOCCER TICKETS
Season tickets and single match tickets for the 2018 University of Louisville soccer season are on sale now through the Louisville Cardinals Ticket Office. The 2018 Louisville soccer tickets can be purchased online at GoCards.com/soccertickets.