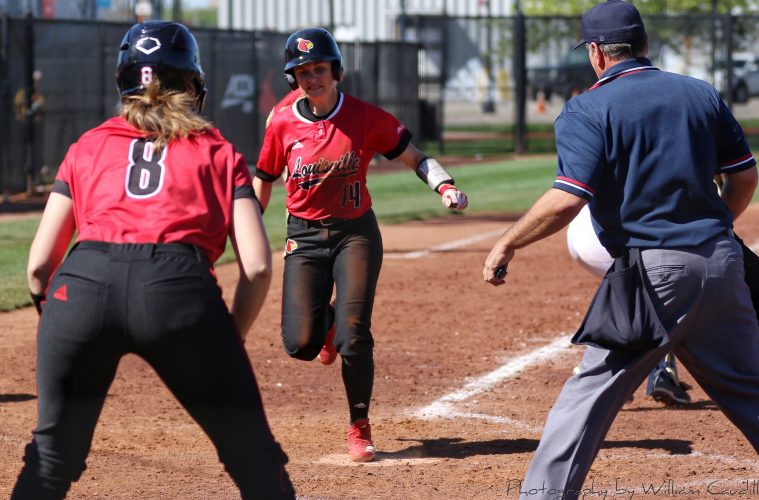 The Cards move to 32-15 on the season and are on a 6-game win streak. After beating Kentucky and sweeping Georgia Tech over the previous week, the Cards are finally receiving votes in the USA TODAY/NFCA Coaches Poll (2) but are not ranked. The team traveled to Huntington, W.V. for a midweek match-up with Marshall and scrapped together a late inning rally to beat the Thundering Herd 5-4 on Tuesday afternoon.

Louisville vs Marshall – W 5-4
All 4 of Marshall’s runs came on 2 run homers in the first and sixth inning.
The Herd held a 2-0 lead heading into the top of the fifth where the Cards plated 2 runs on hits from Maddy Newman and Celene Funke to even it 2-2. Chung would homer in the top of the sixth for the 3-2 lead and the Herd would respond with their previously mentioned second 2-run homer of the game to regain the lead 4-3.
With 2 outs in the top of the seventh, Celene Funke doubled to left center field before Sidney Melton tripled to right center field and scored Funke for the tying run, 4-4. Hensley followed suit and double one to left center field for the winning run and the Cards would hold on for the victory, 5-4.
Taylor (13-1) picked up the win in the circle, giving up two runs, one earned, on two hits and striking out three in 2.0 innings of relief. Megan Hensley started the game in the circle and turned in a solid performance, surrendering two earned runs on three hits and striking out two in 5.0 innings of work.

The Cards return home this weekend for a conference series with North Carolina which includes Senior Day.