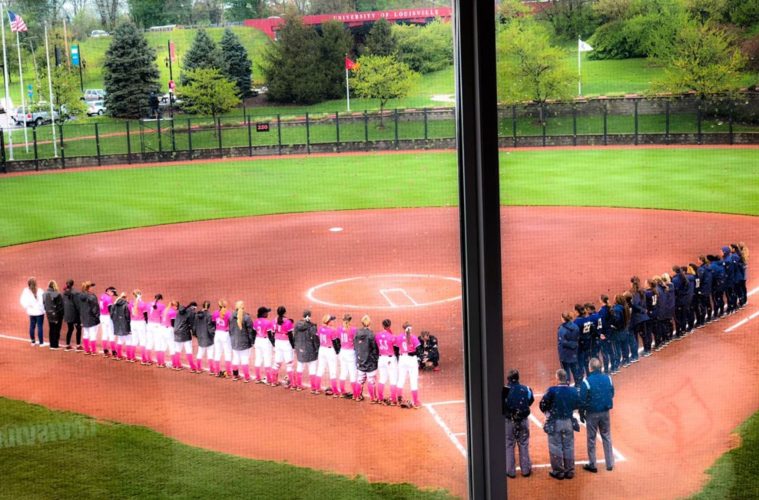 Spring showers bring the May flowers… and the Louisville SB team owns a (29-15, 9-7) record with 2 weeks left in the regular season. Another weekend series with weather altering the schedule.. even before it began. There was a buzz midweek that we would see changes to the weekend’s schedule with the Yellow Jackets. Friday’s first pitch moved moved from 6 p.m. to 2 p.m. Friday’s game ended up being halted in the top of the 5th around 3:50 p.m. as the Yellow Jackets were gaining momentum and the Louisville pitching staff couldn’t hold onto the ball. It would resume on early Sunday morning followed by a double header to complete the series before Georgia Tech’s flight home.

Game 1 vs Georgia Tech – Friday afternoon, haulted & resumed Sunday morning W 11-7
The game began on Friday and with heavy offense. 9 total hits, 10 totals runs between the two teams in the first frame. The first 3 due up for the Cards would see only a few pitches before making connection Funke 0-1 count, Melton 1-1 count and Hensley 1-0. With Melton, Hensley and Roby on base, Cailtin Ferguson clears the bases for a 3 RBI double to put the Cards ahead of GT after they began the inning with a 2 RBI double in the opening frame.
The Cards had an 8-2 lead after 1 inning. The mist turned to drizzle and a serious showers would halt the game in the top of the 5th with GT making a serious buzz to come back. With the Cards leading 10-5, GT had 2 runners in scoring position with nobody out and Coach Aprile asked the umpires to suspend play due to the conditions.
Resuming first thing on Sunday.. the final score would be 11-7. Melton led the Cards at the plate, going 3-for-3 with two runs while Ferguson drove in three. Danielle Watson (9-11) picked up the win, allowing three earned runs on three hits and striking out seven.

Game 2 vs Georgia Tech – Sunday morning W 7-2
The Cardinals jumped to a 5-0 lead using two hits, three walks and an error in a huge first inning. Celene Funke earned a leadoff walk, stole second and moved to third when Melton reached on an error. Walks to Ferguson and Snyder loaded the bases for senior Madison Cousineau’s RBI single. Charley Butler followed with a two-run single and came home on Newman’s double to cap the first inning scoring. The Cards would tack on 2 more in the bottom of the 4th on an RBI from Melton and Funke scored on an error.

Game 3 vs Georgia Tech – Sunday afternoon W 11-10
This one might’ve been weirder than Friday’s 36 hour completion effort. It began at 2 p.m. The first inning featured 9 total runs and for the game, there were three lead changes, a tie and 21 combined runs, the Cards collected 15 hits with nine of them falling in for extra bases including three home runs and six doubles.
Roby went 3-for-4 with two doubles and a home run, four RBIs, Chung went 3-for-4 with two doubles, a home run, three RBIs and two runs. Hensley went 2-for-3 with a home run and scored three runs.
Roby (12-1) picked up the win, allowing six earned runs on five hits and striking out two in 3.1 innings. Hensley gave up four earned runs on one hit and struck out four in 1.2 innings and the game had to be called in 5 so Georgia Tech could make their flight in time.

The team travels to Hunington, W.V. for a midweek matchup with Marshall before returning this weekend for the last home series and Senior Day vs North Carolina.