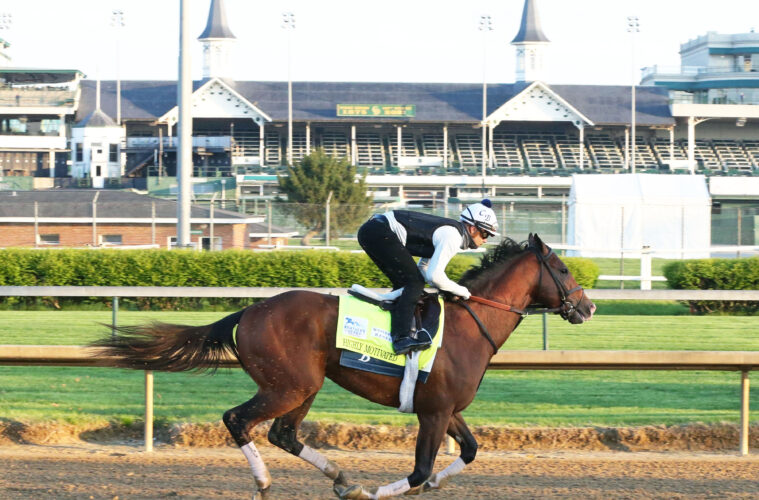 Highly Motivated arrived Monday morning from Keeneland where he had been training since the Blue Grass. Trainer Chad Brown plans to work Highly Motivated on Saturday, weather permitting. Rain is in the forecast for Saturday.

Unseasonably cool temperatures are expected to arrive in the Louisville area overnight Tuesday with snow showers early Wednesday morning, according to the National Weather Service.

Going first during the 7:30-7:45 training window for Derby and Oaks hopefuls were St. Elias Stable’s Known Agenda with Hector Ramos aboard and Repole Stable, Phipps Stable and St. Elias Stable’s Dynamic One with Carlos Perez Quevedoaboard.

Coming out just before 8 o’clock were Calumet Farm’s Bourbonic with Ramos aboard and WinStar Farm and CHC Inc.’s Sainthood with Amelia Green aboard.

Pletcher has penciled in Saturday as the work day for his Derby runners but noted, “There could be some weather coming in and we will watch that and could move the works to Friday.”

“If all goes well after his work on Saturday, we’ll run in the Derby,” Cox said. “He came out of the Arkansas Derby in great shape. He’s a sound horse who is training well.”

All three of his Derby contenders galloped about 1 ½ miles Tuesday morning. Kentucky Derby favorite Essential Quality trained at 5:15 a.m. with Edvin Vargas in the saddle. About 45 minutes later, Caddo River trained with Gustavo Abrego in the saddle. At 7:30, during the exclusive training session for Derby and Oaks contenders, Juddmonte Farm’s Mandaloun trained with Fernando Espinoza in the boot.

All three horses are scheduled to work Saturday morning, according to Cox.

Trainer Mark Casse’s assistant David Carroll reported both horses would work this weekend. Jockey Tyler Gaffalione rides Soup and Sandwich in the Derby while Helium will be ridden by Julien Leparoux.

“He got around there good this morning and I am pleased with the way he shipped in,” said Brown, who has started five horses in the Kentucky Derby with his best finish coming in 2018 when Good Magic was runner-up to eventual Triple Crown winner Justify.

Highly Motivated closed his 2020 campaign with a track record-setting performance in the Nyquist Stakes at Keeneland. A third-place finish in the Gotham (GIII) opened 2021 followed by the 1 1/8-mile Blue Grass that marked his first start around two turns.

“I thought the Blue Grass was a really good race and that was the first time he had been on the lead,” Brown said. “I am confident he can handle the two turns and I think he will move forward in this race.

“We shut him down on purpose (after the Nyquist) and worked backward from the Derby. He has hit all the marks getting here.”

KEEPMEINMIND – Spendthrift Farm, Cypress Creek and Arnold Bennewith’s Keepmeinmind galloped a mile and a half under exercise rider Enrique Benitez at 5:45.

Sitting at No. 22 on the Road to the Kentucky Derby leaderboard, the Robertino Diodoro trainee’s next work date is to be determined.

KING FURY – Fern Circle Stables and Three Chimneys Farm’s King Fury galloped a mile and a half shortly after 5:30 with Danny Ramsey aboard for trainer Kenny McPeek.

Winner of the Lexington at Keeneland in his most recent start, King Fury sits at No. 21 on the Road to the Kentucky Derby leaderboard. He is scheduled to work Saturday.

O BESOS – Barrett Bernard, Tagg Team Racing and West Point Thoroughbreds’ O Besos will have his final work prior to the Kentucky Derby Wednesday or Thursday morning at Churchill Downs.

Jockey Marcelino Pedroza will be aboard for the work and also ride O Besos in the Kentucky Derby.

“He’s maturing even more as every day goes by,” Pedroza said. “The first time I worked this horse I couldn’t believe he won going six furlongs. He loved the extra distance in the Louisiana Derby.”

Starrininmydreams sits No. 23 on the Road to the Kentucky Derby leaderboard.

LONGINES KENTUCKY OAKS UPDATE – Klaravich Stables’ undefeated Search Results, the leading point earner on the Road to the Kentucky Oaks leaderboard, made her first appearance on the track beneath the Twin Spires a day after arriving from Belmont Park.

Trained by Chad Brown, Search Results was partnered by Walter Malasquez in her morning gallop during the 7:30-7:45 training window for Kentucky Derby and Oaks horses.

Also, trainer Robertino Diodoro said that David Cohen would have the mount on Cypress Creek Equine’s Ava’s Grace in the Oaks.

Trainer Robertino Diodoro indicated via text that David Cohen would have the mount on Ava’s Grace who finished second in the Fantasy (GIII) in her most recent start.

The date for her final Oaks work remains to be determined.

Clairiere, the runner-up to Travel Column in the Fair Grounds Oaks (GII), jogged about one mile next to Asmussen on the pony, then galloped about one mile. Twenty minutes later, Pauline’s Pearl came onto the track for the same training regimen.

COACH, TRAVEL COLUMN – Kueber Racing’s Rags to Riches winner Coach officially made the Top 14 on the Road to the Kentucky Oaks leaderboard Monday afternoon following the defection of The Grass Is Blue.

The Brad Cox-trainee galloped about 1 ½ miles at 7:30 a.m. with Edvin Vargas in the saddle.

Her stablemate, Travel Column, one of the top choices for the $1.25 million Longines Kentucky Oaks, galloped about 1 ½ miles at 6:20 a.m. with Fernando Espinoza aboard.

Both fillies are scheduled to work Friday, according to Cox.

Third in the Davona Dale (GII) and Gulfstream Park Oaks (GII) in her past two starts, Competitive Speed is scheduled to work Friday.

Gonzalez said no decision on a rider for the Oaks has been made but that topic was to be discussed later on Tuesday.

Winner of the Gulfstream Park Oaks (GII) in his most recent start, Crazy Beautiful is scheduled to work Saturday.

Malathaat is scheduled to work Friday according to Pletcher.

MARACUJA – Beach Haven Thoroughbreds’ Marajuca is scheduled to work Saturday at Belmont Park and then van to Churchill Downs the following day according to trainer Rob Atras.

The date for the final pre-Oaks work for Millefeuille is to be determined.