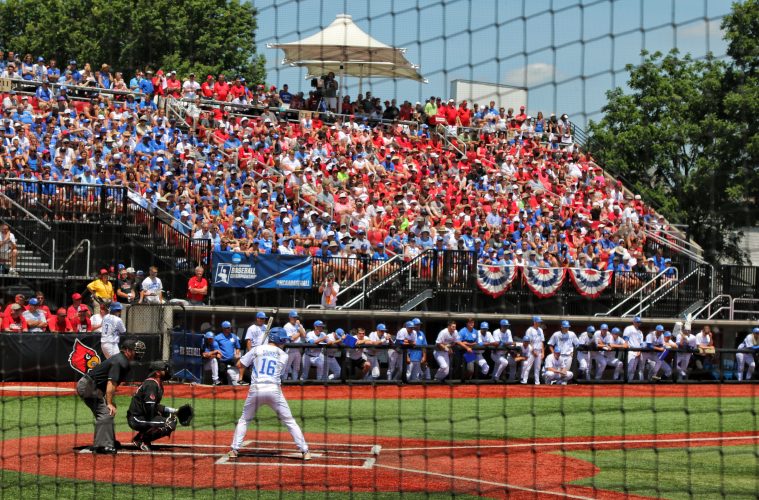 Preview: Battle of the Bluegrass

The third-ranked University of Louisville baseball team heads down the road to Lexington on Tuesday for a second matchup with Kentucky in the Battle of the Bluegrass. First pitch is scheduled for 5 p.m. ET and the game will be televised on ESPNU. Radio coverage will be available on 93.9 The Ville.

The Cardinals continued their strong work in ACC play over the weekend, winning two of three at Virginia. After seeing a lead slip away in an 8-7 extra innings loss Friday night, Louisville responded with 9-5 and 8-2 victories to cap the weekend.

Tuesday will be the 112th Battle of the Bluegrass contest. Kentucky leads the all-time series 64-46-1, including a 35-17 edge in Lexington. The in-state rivals have met in all but two seasons since 1985. The two teams did not meet in 2020 because of the cancellation of the season due to COVID-19 and had both matchups rained out in 2002.

Kentucky won the first Battle of the Bluegrass game of 2021, defeating the Cardinals 11-7 on April 6. Both teams plated three runs in the second inning, but a five spot in the third for the Wildcats proved to be too much to overcome. Henry Davis and Alex Binelas each homered in the loss, while Trey Leonard had a three-hit night at the plate.

·        Cameron Masterman (vs. Bellarmine) and Alex Binelas (at Virginia) have each had a weekend this season in which they homered in all three games of the series. Prior to this season, the Cardinals had not had a player accomplish the feat since Stewart Ijames did so at Rutgers in 2011.

·        The Cardinals have been the one of the best in the country on the basepaths this season with 87 stolen bases, 47 more than anyone in the ACC. Levi Usher leads the ACC and is second in the country with 23, while Cooper Bowman and Luke Brown are second in the ACC with 13, and Henry Davis is sixth with 10.

·        Alex Binelas got off to a slow start but has returned to being a major run producer in the middle of the Louisville order. Over his last 17 games, Binelas is hitting .338 (23-for-68) with three doubles, two triples, nine home runs and 30 RBIs. He registered his third career multi-homer game against Florida State, including his first career grand slam, and later homered in all three games of the series at Virginia. Binelas also recorded two triples against Western Kentucky, becoming the first Louisville player with two triples in a game since Ty Young did so against Notre Dame on March 28, 2013.

·        Trey Leonard is having the best season of his Louisville career in 2021. The junior currently ranks third in the ACC with a .396 batting average. Leonard had a career night at Cincinnati going 4-for-6 with three RBIs against and hitting a go-ahead home run in the sixth, a game-tying double in the eighth and adding another double in the 10th. Over the last 11 games, Leonard is hitting .426 (20-for-47) with five doubles, a triple, three homers and 14 RBIs.

·        Henry Davis has been the most consistent hitter for the Cardinals this season. Davis saw his 23-game hitting streak come to an end in the second game at Notre Dame, the only game he hasn’t recorded a hit this season, and currently has an 11-game hit streak. The sophomore leads the ACC in on-base percentage, ranks second in batting average and walks, third in hits, total bases and RBIs, fourth in slugging, and sixth in stolen bases. Davis has 10 stolen bases after having just one through his first two seasons at Louisville. Over his last 11 games, Davis is hitting .474 (18-for-38) with two doubles, three home runs, nine RBIs, 14 walks and a .636 on-base percentage.

·        Dalton Rushing made just two starts between March 7 and April 10. He returned to the starting lineup on April 11 against Florida State and tallied a pair of hits, including a game-tying double. Rushing then started the first two games at Virginia and proceeded to homer in each contest. In his last three starts, Rushing is 5-for-12 (.417) with a double, two home runs and six RBIs.

·        Adam Elliott opened the season in the starting rotation but has returned to his usual role in the Louisville bullpen. In 10 relief appearances this season, Elliott is 4-1 with two saves and a 2.22 ERA, striking out 32 in 28.1 innings with an opponents’ batting average of .131.