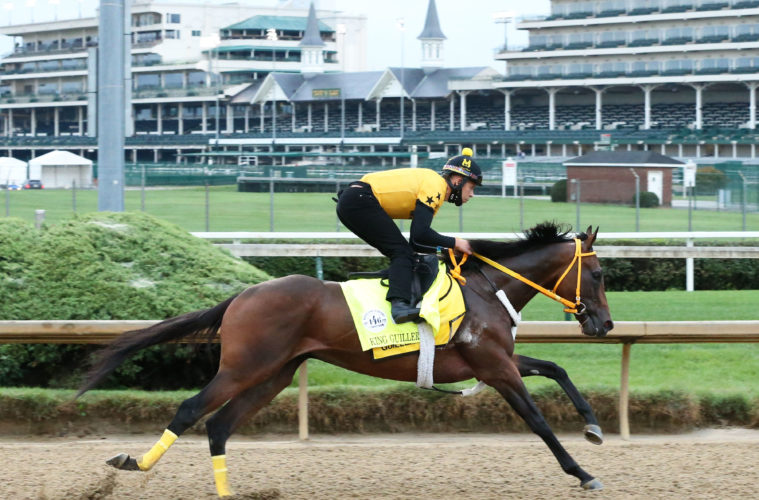 Owner Charles Fipke reported that Shirl’s Speight will miss the Derby because of a minor cough.

The Blue Grass and Ellis Park Derby winner had his final work prior to the Derby Friday with a five-furlong move in 1:00.80. He is expected to walk the shedrow Sunday.

Attachment Rate is scheduled to work on Sunday. Trainer Dale Romans is due back in Louisville Saturday from Saratoga.

“I think he is really improving at this stage of his career,” trainer Mark Casse said. “He’s maturing; he’s ready to go.

“I thought he looked super,” added Casse, who will be seeking the first Kentucky Derby triumph of his Hall of Fame career. “If you said to me three months ago you could have him where he is today and you’d be in the position you’re in, I would have taken it. I just think he’s at the top of his game right now. That’s all you can ask for.”

Saturday’s work was the sixth for Enforceable since finishing fourth in the Blue Grass Stakes (GII) at Keeneland on July 11 and the second consecutive work with Beschizza aboard.

“I thought the work was perfect,” said Beschizza, who also had worked Enforceable over the winter at Fair Grounds. “He went a scratch under :50. Mark and (assistant trainer) David (Carroll) just wanted to keep the lid on it. His major work was in the bag.”

Enforceable will represent the first Kentucky Derby mount for Beschizza.

“I like his consistency,” Beschizza said. “He is a light-framed horse and doesn’t need a lot to keep fit. He is going to have to be on his ‘A’ game. He needs pace and we know he is going to get it (in the Derby).”

“Where he fits in (the Kentucky Derby field) will depend a lot on who gets lucky, who doesn’t. And pace,” Casse said of the late-running colt. “But the only thing for us as a trainer we want is for a horse to be at the top of his game, and I feel like he’s there.”

Casse is set to drive up to Kentucky from his base in Ocala, Florida, with a planned midweek arrival.

Hernandez said Finnick the Fierce would train the next two mornings in Lexington and then ship to Churchill Downs Monday afternoon.

Trained by Juan Avila, King Guillermo strolled through opening eighth-mile splits of :14.40 and :27.20 before he galloped out five furlongs in 1:05.20.

“(Juan) asked me to go easy and it was exactly what the horse needed,” Garcia said. “I thought he galloped out around the turn well and was moving very easy on the track. He doesn’t need to do much, he’s pretty fit.”

Major Fed is likely to return to the track Sunday at 5:15 a.m.

The Steve Asmuseen-trained colt is expected to work Monday. Jockey Ricardo Santana Jr. will have the call in the Derby.

Money Moves worked five furlongs in 1:00.14 Friday at Saratoga for trainer Todd Pletcher. He is scheduled to arrive Monday at Churchill Downs.

“Once he got going, I thought it was a good work,” Hartman said of the breeze that ended with a :23.40 final quarter and a gallop-out to the half-mile  pole. “He will walk again tomorrow and then back to the track Monday.”

Miguel Mena, who was aboard for the work, has the Derby mount, his second. Mena rode Backtalk in the 2010 Run for the Roses.

Joseph reported via text that Ny Traffic came out of the work well and is scheduled to ship to Churchill Downs Monday.

“Everything is good this morning,” McCarthy said looking at the track that was labeled muddy before the first renovation break. “We got lucky with the weather yesterday and it worked out well.”

SHIRL’S SPEIGHT – Charles Fipke reported on Twitter that $100,000 Marine Stakes winner Shirl’s Speight will miss the Kentucky Derby due to a minor cough.

“He’s coughing and full of mucus so we’ve had to put him on antibiotics,” trainer Roger Attfield said. “I’ve had 4 or 5 of them (get sick) these last couple weeks actually. It’s nothing majorly serious but it’s bad timing. We were looking forward to seeing if we could something fancy but there will be another day. Just normal stuff we have to go through quite often.”

“Everything is good,” Biancone said via text. “He leaves at 5:30 tonight and should be at Churchill between 11 and 11:30 tomorrow morning.

STORM THE COURT – David Bernsen, Exline-Border Racing, Dan Hudock and Susanna Wilson’s Storm the Court worked six furlongs on his own in 1:12.80 with Austin Solis aboard over a fast track at Del Mar Saturday morning.

Trainer Peter Eurton gave the work a thumb’s up via text with Storm the Court scheduled to ship to Louisville on Monday.

THOUSAND WORDS – Multiple graded stakes winner Thousand Words completed his final piece of serious work in advance of his trip to Louisville for the 146th Kentucky Derby, working five furlongs in :59.80 in company under the watch of trainer Bob Baffert at Del Mar Saturday.

The move was the second fastest of 44 works at the distance for the day and continued the pattern of improvement for the son of Pioneerof the Nile. The colt broke off several lengths behind Tapitution but went by his workmate on the gallop out, continuing on to cover a mile in 1:39 1/5 on Baffert’s watch.

“Bob said it was great work, he was really happy,” said Jason Loutsch, racing manager for Albaugh Family Stables, which owns Thousand Words in partnership with Spendthrift Farm. “It looks like we’re trying to teach him to sit back a little bit. He was right off the workmate, about 5 or 8 lengths, and that’s probably going to be our style this week since there is a lot of speed in (the Kentucky Derby). I think there will be three or four horses up near the lead and hopefully we’re in the second pack that sits behind them.”

Thousand Words comes into the Kentucky Derby off a victory in the Shared Belief Stakes at Del Mar on Aug. 1 where he bested Grade 1 winner Honor A. P.  The bay colt opened his sophomore campaign with a victory in the Grade 2 Robert B. Lewis Stakes and boasts and overall record of four wins from seven starts.

“He’s one of these horses that is just steady,” Baffert said. “He’s just a steady kind of horse. I think he’ll be a threat. Both of them, Authentic and him, they’re threats. When you see a horse like Tiz the Law, he looks like right now he’ll be so tough to beat, but I’m happy right now the way they’re coming in. They’re coming in the right way and that’s all you can ask for right now.”

Thousand Words and his stablemate Authentic are set to ship to Louisville on Monday August 31. Baffert said Authentic is slated to put in his last serious workout at Del Mar on Sunday.

Tiz the Law, the multiple Grade I-winning son of Constitution, is scheduled to arrive in Louisville Monday evening at 5 o’clock.

“Everything went fine,” trainer Barclay Tagg said. “He came back well. It may have been a little faster than he needed to go but the track was very fast, too. It went perfect, he’s a pleasure to train.”