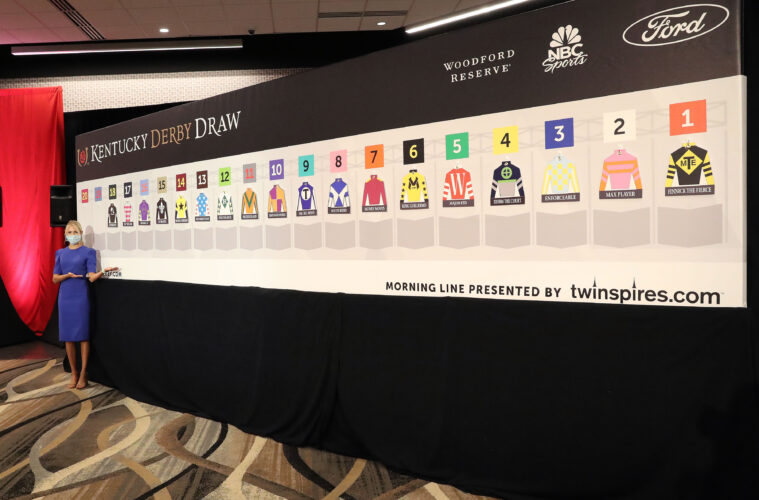 Sackatoga Stable’s Tiz the Law, dominating winner of the Travers (GI) and Belmont Stakes (GI) has been installed as the 3-5 morning line favorite in a field of 18 horses entered for Saturday’s 146th running of the $3 million Kentucky Derby Presented by Woodford Reserve (GI).

Tiz the Law is the lowest-priced morning line favorite since 1989 when the entry of Easy Goer and Awe Inspiring was 3-5. Morning line oddsmaker Mike Battaglia also made Honest Pleasure (1976) and Spectacular Bid (1979) 3-5 and Seattle Slew was the 1-2 program choice in 1977.

Trained by Barclay Tagg, Tiz the Law has won six of seven career starts with the lone blemish coming at Churchill Downs in last November’s Kentucky Jockey Club (GII) in which he finished third over a sloppy track.

The New York-bred son of Constitution is four-for-four in 2020 with his other victories coming in the Holy Bull (GIII) and Florida Derby (GI). Manny Franco, who has ridden Tiz the Law in his past six starts, has the call Saturday and will break from post position 17. No Derby winner has come from post 17.

Tiz the Law will try to give Tagg a second Kentucky Derby victory to go with the 2003 triumph by Funny Cide for Sackatoga.

Trained by John Shirreffs and ridden by Mike Smith, Honor A. P. has compiled a 5-2-3-0 career mark highlighted by a Santa Anita Derby (GI) over Kentucky Derby rival Authentic.

Second to Derby rival Thousand Words in the Shared Belief at Del Mar in his most recent start, Honor A. P. will attempt to add to the Derby records of Shirreffs and Smith who teamed to win the Derby in 2005 with Giacomo. Smith won his second Derby in 2018 with Triple Crown winner Justify.

Spendthrift Farm, MyRaceHorse Stable, Madaket Stables and Starlight Racing’s Authentic, winner of the Haskell (GI) in his most recent start, is the third choice on the morning line at 8-1.

Authentic, who will break from post position 18, will be ridden by two-time Derby winner John Velazquez. Velazquez previously won with Always Dreaming (2017) and Animal Kingdom (2011).

Thousand Words (15-1) will be ridden by Florent Geroux and break from post position 10.

A victory by Authentic or Thousand Words would give Baffert a record-tying sixth Derby victory to equal the mark of Ben Jones.

Pletcher, who saddled the Derby winner in 2010 (Super Saver) and 2017 (Always Dreaming), will send out Robert LaPenta and Bortolazzo Stable’s Money Moves.

Listed at 30-1 on the morning line, Money Moves has won two of three career starts and will be making his graded stakes debut in the Derby. Breaking from post seven, Money Moves will be ridden by Javier Castellano.

Mott will send out South Bend for the ownership of Gary Barber, Wachtel Stable, Peter Deutsch and Pantofel Stable. Tyler Gaffalione has the mount on the 50-1 morning line proposition and exit post position eight.

FINNICK THE FIERCE (Post 1, 50-1) – Co-owner/Trainer Rey Hernandez: “You know looking back, the best races he has been running came from the one position. He ran third in the Arkansas Derby from the one and especially going a mile and a quarter and how he comes from off the pace, I don’t think there is any issue.” “

ENFORCEABLE (Post 3, 30-1) – Trainer Mark Casse: “I don’t think it changes much of anything. I thought going into the draw I didn’t think it was as important as where we drew as much as where others drew. There was some drama late but Tiz the Law ended up in a good spot. Authentic is going to definitely going to have to go and then Manny (Franco on Tiz the Law) and Mike (Smith on Honor A. P.) if they let Authentic get away, they may not run him down so they’re going to be sitting right behind him I believe and not letting him get too far away.”

STORM THE COURT (Post 4, 50-1) – Trainer Peter Eurton: “I like it. It could be a whole lot worse. He could be in the one, two or three. Or, even 18 and then we’d have to figure out how to get over. Now, he’s already over. He just has to get out of the gate and get somewhat of a forward position, but not be on the lead. There’s so much speed in there.”

MAJOR FED (Post 5, 50-1) – Trainer Greg Foley: “We were the first horse drawn so they didn’t even give us any drama. It did save me sweating out the inside post.”

KING GUILLERMO (Post 6, 20-1) – Owner Victor Martinez: “I think this is a perfect spot. It’s such an unbelievable dream of mine to be here in Kentucky. It’s very surreal and I am so excited for my entire family.”

Jack Wolf, Starlight Racing, co-owner Authentic: “The one time he was out there in California he broke dead right so hopefully Johnny (VCelazquez) will be a stronger rider this time around. I guess it’s better than one or two. I would think so (he’ll have to send). The one hole now is basically what the old three hole was and there will probably be a couple scratches between now and then so maybe we do move in a couple spots.”

ATTACHMENT RATE (Post 13, 50-1) – Trainer Dale Romans: “I always like horses to break on either side of my runners and this is a good spot for him to be.”

NY TRAFFIC (Post 15, 20-1) – Trainer Saffie Joseph Jr.: “It’s a good post. Hopefully, he will break clean and (jockey) Paco (Lopez) can get him into a forward position without rushing him.”

HONOR A. P. (Post 16, 5-1) – Trainer John Shirreffs: “I just talked to (jockey) Mike (Smith) and he’s happy with it. I think it’s OK. There’s a long run to the first turn and I don’t have to worry about getting pushed down on the outside.”

TIZ THE LAW (Post 17, 3-5) – Trainer Barclay Tagg: “I like being on the outside, I didn’t particularly want to be out that far but he seems to handle everything that’s thrown at him so we’ll just have to leave it up to him. It gives you a chance, if you have any speed at all, it gives you a chance to get a better position.”

(No one has won out of post 17): “I just put those kind of things out of my mind. There are a lot of horses who didn’t win the Derby so frankly I’m not that worried about it.

“He’s a unique horse, I keep pinching myself because he’s such a unique horse. Everything we’ve asked him to do he just does it. He’s a strong horse, he’s not flighty but he’s on the muscle all the time. He’s so exciting in his races. You think he’s gotten in trouble here, in trouble there and next thing you know he’s in front. He’s a pretty amazing horse. I don’t know if I’ve seen a horse like him.

“He flew in from Albany and we met him here. He walked off the van, took a couple turns, did his business and started eating hay.”