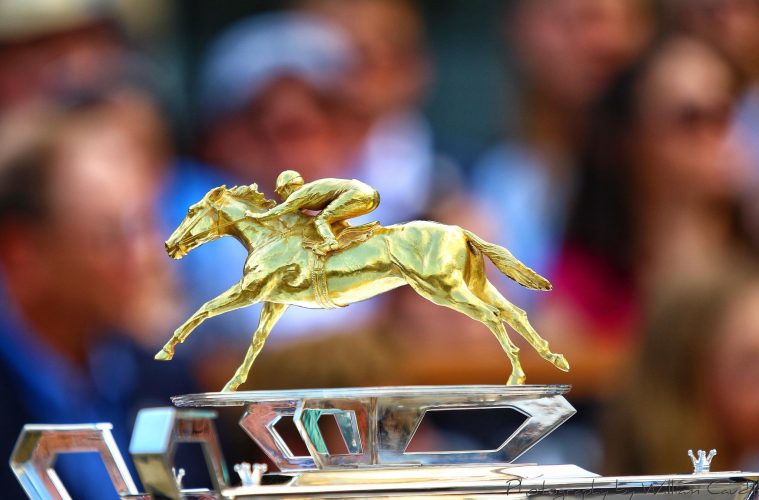 The final two opportunities for horses to gain points and qualify for the $3 million Kentucky Derby presented by Woodford Reserve (Grade I) will take place Saturday at Oaklawn with the $1 million Arkansas Derby (GI) and at Keeneland with the $200,000 Lexington (GIII).

The Arkansas Derby, which drew a field of six, is led by Gary and Mary West’s undefeated graded stakes winner Concert Tour. The colt last won the $1 million Rebel (GII) at Oaklawn for Hall of Fame trainer Bob Baffert. The Arkansas Derby awards the Top 4 finishers points on a 100-40-20-10 scale.

In the Lexington, Godolphin’s multiple graded stakes placed colt Proxy will head a field of 10 horses attempting to garner points on a 20-8-4-2 scale for the Top 4 finishers.

As of Thursday morning, the current cutoff to make the starting gate for the first Saturday in May was held by Lexington Stakes entrant Proxy with 34 points.

CONCERT TOUR, HOZIER GIVE BAFFERT ANOTHER STRONG HAND IN ARKANSAS DERBY – Although Bob Baffert hasn’t dominated the Arkansas Derby (GI) like he has he Rebel (GII), the Hall of Fame conditioner will be heavily favored to carry off the hardware in Saturday’s $1 million renewal of the 1 1/8-mile Derby at Oaklawn Park, with stable companions Concert Tour and Hozier comprising one-third of the field.

Four weeks ago, Concert Tour provided Baffert with his eighth victory in the Rebel since 2010, while Hozier was 4 ¼ lengths behind in second. Those two will command most of the wagering attention in the final Road to the Kentucky Derby series prep of 2021, which will award qualifying points of 100-40-20-10 to the top four finishers.

By virtue of his dominating Rebel performance, in which he improved his record to three wins from as many starts, Concert Tour earned enough points, 50, to earn a slot in the May 1 Kentucky Derby (GI). With a strong performance on Saturday, though, the son of 2007 Kentucky Derby winner Street Sense could put himself in the discussion as a potential favorite on the first Saturday in May, when Baffert will look to win the Derby for a record seventh time.

Hozier, who earned 20 points in finishing second in the Rebel in his stakes debut, would need to run third or better in the Arkansas Derby to ensure a slot at Churchill Downs in three weeks. He’s a son of Pioneerof the Nile, whose son American Pharoah was one of three previous Arkansas Derby winners for Baffert. Baffert also won with Bodemeister (2012), and last year saddled Charlatan and Nadal to win the Derby’s two divisions, though Charlatan was subsequently disqualified due to a medication positive.

Caddo River, who crushed the opposition by more than 10 lengths in the Smarty Jones in January, was outrun by Concert Tour in the Rebel, in which he retreated to fifth as the 6-5 favorite. Farther back in seventh was Get Her Number, who was making his first start since taking the American Pharoah (GI) at Santa Anita in late September.

In out-finishing Caddo River and Get Her Number in the Rebel, Super Stock easily outran expectations as a 40-1 chance, but the colt’s only win in seven starts occurred in a restricted stakes at Lone Star last summer and he’ll be cool on the board again Saturday. The field is rounded out by Last Samurai, who was outrun in the Southwest (GIII) and a preceding allowance following a maiden win at Churchill Downs in late September. – Vance Hanson/Brisnet.com

PROXY, HOCKEY DAD SEEK DERBY POINTS IN LEXINGTON – Qualifying races for the Kentucky Derby will conclude this weekend, and Saturday’s $200,000 Lexington (Grade III) at Keeneland will award a combined 34 points (20-8-4-2) to the top four finishers.

Proxy and Hockey Dad are the only runners in the 10-horse field who can lock up a Kentucky Derby berth with a win; the rest would need help to make a 20-horse starting gate at Churchill Downs on May 1.

A Godolphin homebred Tapit colt, Proxy has earned points in all three stakes appearances this season, finishing second in the Risen Star (GII) and Lecomte (GIII) prior to an even fourth in the TwinSpires.com Louisiana Derby (GII). After adding blinkers last time, Michael Stidham will remove the headgear in the 1 1/16-mile Lexington, and John Velazquez will retain the mount.

Hockey Dad exits a close third in the Jeff Ruby Steaks (GIII) at Turfway Park, netting 20 points in his stakes debut. The Nyquist colt had posted three consecutive wins over California-bred rivals in advance of his first attempt against open competition last time. Mario Gutierrez will be in to ride for Doug O’Neill.

Bezos, who was listed as an individual betting interest in Pool 2 of the Kentucky Derby Future Wager despite never having started, will attract support after rolling to a 4 ½-length maiden win at Santa Anita in his second start. Bob Baffert trains the Empire Maker colt, who stretched to two turns last time, and Drayden Van Dyke takes over the reins.

Noble Reflection and Swiftsure ship in from Oaklawn after convincing wins. Noble Reflection established fast splits posting a 4 ½-length maiden tally the second time out on March 7, and Javier Castellano will be up for the first two-turn start. Swiftsure also stretches out for his stakes debut, romping by 3 ½ lengths over entry-level allowance foes last time. Irad Ortiz Jr. picks up the mount.

Soup and Sandwich and Helium arrived via van from Ocala, Fla. and are stabled in Barn 36. Both horses trained Thursday at Churchill Downs.

ESSENTIAL QUALITY TO HAVE TWO LOCAL WORKS PRIOR TO DERBY – Godolphin’s early Kentucky Derby (GI) favorite Essential Quality will likely have two published workouts over the Churchill surface prior to the “Run for the Roses,” according to trainer Brad Cox.

“We got him in here from Keeneland on Monday and he went back to the track Wednesday,” Cox said. “He’ll probably work twice before the Derby and he’ll be ready. He really showed us a gutsy effort in the Blue Grass and I think he’ll get a lot out of that race by how hard he had to work for the win.”

Pletcher is scheduled to have his Keeneland-based horses van from Lexington to Churchill Downs Sunday morning at 10:30 a.m. and arrive just past noon. His South Florida-based runners are scheduled to arrive later in the afternoon along with his New York-based horses, according to Senior Director of the Stable Area Steve Hargrave.

Among the horses Pletcher is scheduled to send to Churchill Downs are Derby contenders Bourbonic, Dynamic One, Known Agenda and Sainthood and Oaks runner Malathaat.

DOWN THE STRETCH – Bernard Racing, Tagg Team Racing and West Point Thoroughbreds’ O Besos, currently No. 23 on the Road to the Kentucky Derby Leaderboard with 25 points, will either target the Derby or $500,000 Pat Day Mile presented by LG&E and KU, according to trainer Greg Foley. “We’ll prepare like we can get in the Derby. If not, we’ll go to the Pat Day,” Foley said. … All Kentucky Derby Week stakes races will close Saturday, April 10. For more information, visit www.churchilldowns.com/horsemen or contact Dan Bork at (502) 638-3806.

Prep races are almost finished, with only two qualifiers remaining, and the first Saturday in May is less than four weeks away.

Essential Quality looked the part of the Kentucky Derby favorite, running down a classy rival to prevail in the Blue Grass (GII) at Keeneland.

Rock Your World made the most of his lone opportunity to qualify, dominating the Santa Anita Derby (GI) wire-to-wire in his first dirt start.

Bourbonic didn’t make any sense, but the 72-1 longshot closed from the clouds to stamp his ticket in the Wood Memorial (GII) at Aqueduct.

Saturday’s Lexington (GIII) at Keeneland will award points on a 20-8-4-2 basis.

Essential Quality opened his career with a couple of front-running wins, but the champion 2-year-old male became more push-button with experience, rallying to win the Breeders’ Cup Juvenile (GI) and Southwest (GIII).

He showed his versatility in a Blue Grass lacking pace, closely tracking Highly Motivated from the break.

The Blue Grass was a make-or-break race for Highly Motivated, who showed class as a juvenile but had yet to try two turns. Chad Brown had the Into Mischief colt poised for his best following a troubled third in the sophomore opener, the Gotham (GIII) in early March.

Highly Motivated led nearly every step of the way, but Essential Quality would not be denied after a thrilling stretch duel, getting up in the last strides to win by a neck.

The stiff test figures to benefit the probable Kentucky Derby favorite – Essential Quality received no resistance when rolling to a 4 ¼-length decision in the Feb. 27 Southwest – and the gray colt will bring a 5-for-5 record to the first race of the Triple Crown.

Highly Motivated secured a Kentucky Derby berth, and the talented colt is eligible to be part of the pace scenario on May 1. I’m not sure the 1 ¼-mile distance will be optimal, though.

Rombauer never made a serious impact, winding up more than five lengths back of the top pair, but offered a decent closing kick to be a clear third. The late runner sits on the bubble presently, ranked 21st on the Kentucky Derby leaderboard, but a few defections are expected. Rombauer appears likely to move into the Top 20, and he’ll receive more pace in the Kentucky Derby.

Rock Your World took it to rivals at the break, flashing to the front from his innermost post, and he left a fine impression posting a convincing wire-to-wire victory in his first dirt start.

Unraced at two, the Candy Ride colt opened his career with a pair of comfortable turf wins, including Feb. 27 Pasadena Stakes. However, he had never been past a mile, and Rock Your World faced a significant class check in the tradition-rich prep race – the Santa Derby has produced 19 Kentucky Derby winners.

Rock Your World may not be showing the way early in the Kentucky Derby, but he should be prominent following Saturday’s breakout performance.

Medina Spirit was beaten to the early lead, but the odds-on favorite easily held second. A Grade III winner, the Baffert-trained colt can’t be dismissed on Derby Day – Medina Spirit has the tactical speed to be in a prime spot turning for home at Churchill Downs.

After weakening to third in the later stages of the San Felipe (GII), Dream Shake had little left for deep stretch in the Santa Anita Derby. He picked up 20 points for the bronze medal effort, increasing his point total to 30, and Dream Shake will need some help to make the Derby field (22nd on the leaderboard).

The $2 Pletcher exacta returned a whopping $906.

Bourbonic needed three starts to graduate, dropping into a $50,000 maiden claiming race at Aqueduct in early December. The Calumet Farm homebred Bernardini colt came back to win a $50,000 optional claimer a month later, and Bourbonic was exiting a well-beaten second in a Feb. 23 allowance/optional claimer at Parx.

The winner of his last race, Market Maven, faded to eighth after setting the pace in the Wood.

“Sometimes the worst thing you can have is a hot hand in January and February,” Pletcher said. “We were hoping something would come together and we always thought he had potential to step up. It was good to see him do it.”

Given the moderate pace (:24.88, :50.18, 1:14.98 and 1:40.76), Bourbonic’s late-running theatrics were even more stunning. Kendrick Carmouche bided his time at the back of the nine-horse field most of the way, calling upon the one-run closer as they swung wide into the stretch, and Bourbonic closed dramatically to nail Dynamic One by a head on the wire.

He earned only a 93 Speed figure.

Dynamic One ran well in his first stakes attempt. The Union Rags colt broke his maiden by 5 ¼ lengths when stretching out nine furlongs in his previous outing, and he rallied sharply to take a clear lead in upper stretch of the Wood, turning back a challenge from Crowded Trade before being caught late.

Crowded Trade, who was exiting a runner-up in the Gotham, has the points to make the Kentucky Derby field, but Brown indicated the extra distance wouldn’t be in the best interests of the More Than Ready colt.