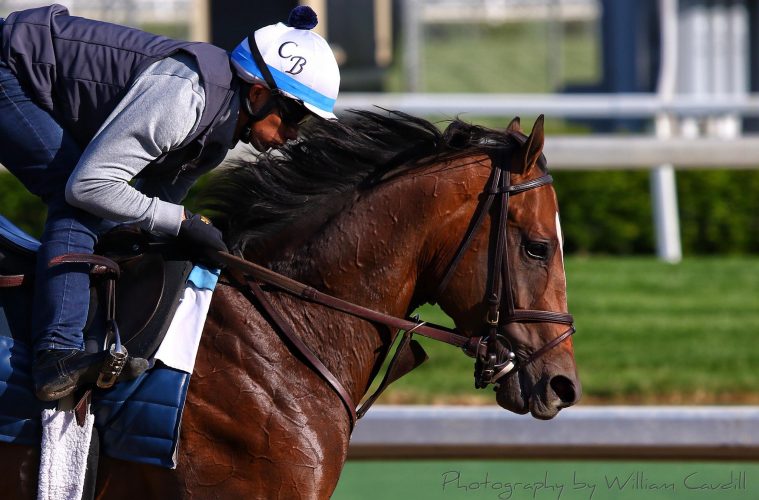 Haikal is a Daaher colt trained by Kiaran McLaughlin will be ridden by Rajiv Maragh and is owned (and was bred) by Shadwell Stable/Farm.

Kiaran McLaughlin is an accomplished trainer, a former UK student/Lexington native, and won the 2006 Belmont with Jazil, who was another Shadwell Stable horse. Kiaran has 3 Breeders’ Cup wins and has strong connections to Dubai’s Shadwell Stables and Godolphin Racing as a result for spending 10 years going back and forth between the Dubai & New York circuits. McLaughlin’s biggest accomplishment of his racing career was in 2006 when Invasor won the BC Classic.

Rajiv Maragh has been on the scene for quite some time and owns a number of Grade Stakes wins including 4 Breeders’ Cup wins. Maragh’s best Derby finish to date was on Mucho Macho Man in the 2011 Kentucky Derby and has yet to claim a Triple Crown race. Maragh also rode Wicked Strong in the Derby. Rajiv relocated from New York to California but can be seen on racing cards in Kentucky.

Shadwell Racing is owned by the Deputy Ruler of Dubai Sheikh Hamdan bin Rashid Al Maktoum who also owns 8 stud farms worldwide, including Shadwell Farm near Lexington (established in 1985). Shadwell has enjoyed success globally in the United Kingdom, Ireland, France, Australia, nited Arab Emirates as well as in the United States. The lone win in the Triple Crown series was (as stated above) Jazil in 2006 in the Belmont Stakes, but the operation does own Breeders’ Cup wins and a strong desire to compete at the highest levels of racing around the world.

Haikal earned enough points to get in the Derby by winning the Gotham Stakes over Mind Control and Instagrand and was 3rd in the Wood Memorial to Tacitus and Tax. Haikal won the Gothm relatively easy and was well beaten in the Wood. I do like Haikal’s speed figures (92,99,99,104,100) as a consistent runner and Maragh has had the mount in 4 of his 5 races. So we have strong connections, we have consistency. But Haikal doesn’t jump out at you as a strong Kentucky Derby contender.

I would have liked to have seen a performance away from Aqueduct to figure out if this horse can adapt to different tracks. There were also no excuses for Haikal in the Wood Memorial as Tactius and Tax were clearly much the best.

My Take on Haikal

I think Haikal is a quality horse, but I have my doubts about his ability to win the Roses.  I’ll likely use Haikal in exotic wagers in the 3rd & 4th position but I do not see this horse turning for home with a real shot at getting to the wire first.