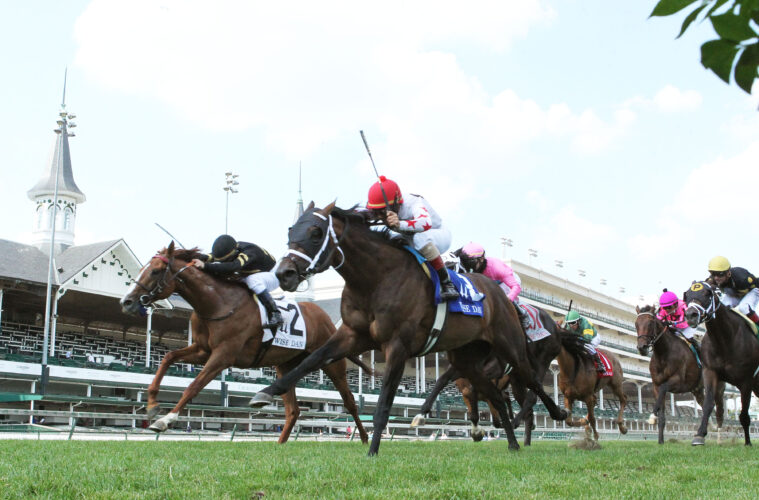 A field of 10 top older grass runners will go to post in the 34th running of the $1 million Old Forester Bourbon Turf Classic (GI), one of six graded stakes that will precede Saturday’s 146th running of the $3 million Kentucky Derby Presented by Woodford Reserve (GI).

The 14-race program begins at 11 a.m. (all times Eastern) and will culminate the Derby that is scheduled for a 7:02 p.m. post time.

Gaining Ground Racing’s Factor This, riding a four-race win streak, and Skychai Racing and Sand Dollar Stable’s Somelikeithotbrown, winner of the Bernard Baruch (GII) at Saratoga in his most recent start, will be the starting top weights with 124 pounds in the Old Forester Bourbon Turf Classic that will go as the day’s 13th race with a 5:50 post time.

Trained by Brad Cox, Factor This counts the GII Wise Dan at Churchill Downs among his scores in his win streak. Shaun Bridgmohan, who has been aboard for all of those victories, has the call Saturday and will break from post one.

Siomelightithotbrown, trained by Mike Maker, has placed in four other graded stakes on turf and in his lone race over the Matt Winn Turf Course finished third in the 2018 Breeders’ Cup Juvenile Turf (GI). Tyler Gaffalione, who was aboard for the victory in the Baruch, has the call Saturday and will break from post position nine.

SERENGETI EMPRESS TOPS DEEP FIELD OF 10 FOR DERBY CITY DISTAFF – Joel Politi’s Serengeti Empress, the 2019 Kentucky Oaks (GI) winner who is coming off a victory in the Ballarina (GI) at Saratoga, heads a field of 10 fillies and mares in the Derby City Distaff.

The Derby City Distaff will go as Saturday’s 12th race with a 5:17 post time.

Trained by Tom Amoss, Serengeti Empress has won two of three starts at the 7-furlong distance with her lone loss coming to champion Covfefe in last year’s Test (GI). Tyler Gaffalione has the mount and will break from post position eight.

The Longines Churchill Distaff Turf Mile is carded as the day’s 11th race with a 4:39 post time.

Trained by Chad Brown, Newspaperofrecord returned to the races in June following an 11-month layoff to win the Intercontinental (GIII) and followed that effort up with a front-running score in the Just A Game (GI).

Javier Castellano has the mount on Newspaperofrecord and will break from post position four.

The Pat Day Mile will go as the afternoon’s ninth race with a 3:35 post time.

Trained by Steve Asmussen, Echo Town comes into Saturday’s race off a 3 ¼-length victory in the Allen Jerkens (GI) at Saratoga on Aug. 1. Ricardo Santana Jr. has the call and will break from post position two.

No Parole, winner of the Woody Stephens (GI) at Belmont before faltering as the favorite in the Allen Jerkens, is trained by Tom Amoss. James Graham, who rode No Parole to daylight victories in his first three starts, has the call Saturday and will break from post position seven.

Rushie, third in the Blue Grass (GII) and Santa Anita Derby (GI) in his past two starts, cuts back to a one-turn race for the first time since his debut last October at Santa Anita. Trained by Michael McCarthy, Rushie will be ridden by Javier Castellano and break from post position nine.

SMOOTH LIKE STRAIT, FIELD PASS MARQUEE NAMES IN FIELD OF EIGHT FOR AMERICAN TURF – Multiple stakes winners Field Pass and Smooth Like Strait top a field of eight entered for the American Turf Presented by Smithfield.

The American Turf is scheduled as the eighth  race with a 2:55 post time.

Three Diamonds Farm’s Field Pass, a two-time Grade III winner, comes into Saturday’s race off a seventh-place finish in the Saratoga Derby Invitational. Prior to that, he had won the Transylvania (GIII) at Keeneland and the Audubon at Churchill Downs.

Trained by Mike Maker, Field Pass will be ridden by Tyler Gaffalione and break from post position four.

Cannon Thoroughbreds’ Smooth Like Strait has won his past two starts beginning with the War Chant here in May and then the La Jolla Handicap (GIII) at Del Mar. Trained by Michael McCarthy, Smooth Like Strait will break from post position five and be ridden by John Velazquez.

10 START ON ROAD TO 2021 KENTUCKY DERBY IN IROQUOIS – The Road to the 2021 Kentucky Derby will begin Saturday afternoon when 10 2-year-olds go to the post for the Iroquois.

Topping the entries is Stephen Fidel’s Therideofalifetime, runner-up in the Saratoga Special (GII) in his most recent start. Trained by Ignacio Correas IV, Therideofalifetime will be ridden by Florent Geroux and break from post position 10.

Trained by Bill Morey, Pico d’Oro won the Ellis Park Juvenile last month in his most recent start that served as his maiden-breaking score. Javier Castellano has the mount and will break from post position seven.