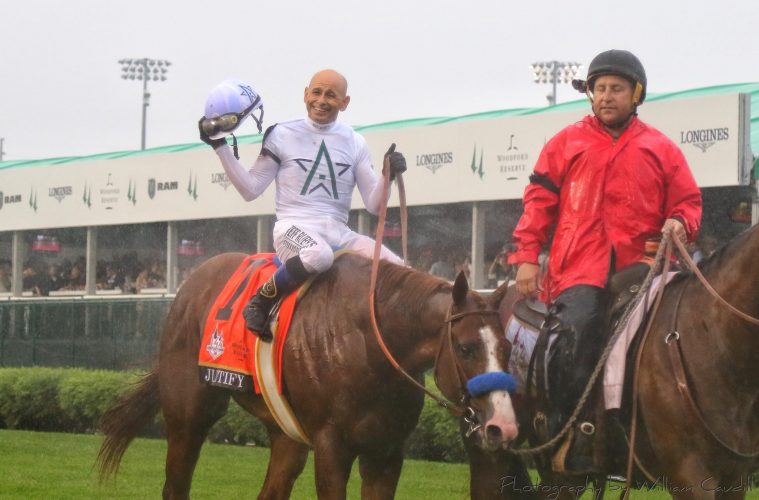 Omaha Beach is trained by Richard Mandella and will be ridden by Hall of Fame jockey Mike Smith and is owned by Fox Hill Farms. Dick Mandella is as accomplished trainer as you’ll find with 9 Breeders’ Cup victories a Dubai World Cup…. but no Triple Crown victories as of yet. Mike Smith…. well… he’s the best there is in the saddle in high level graded stakes races and won the Triple Crown last year aboard Justify. Fox Hill Farms has had some high-level success as well with several Breeders’ Cup victories and nearly scored a Kentucky Derby win with Hard Spun in 2007 who finished second in the ‘Run for the Roses’ to Street Sense and then finished 2nd in the Breeder’s Cup Classic to Curlin. Fox Hill also finished 2nd in 2008 with filly Eight Belles who lost to Big Brown and tragically collapsed in the gallop out.

Omaha Beach is out of War Front and took FOREVER to break his maiden but was always extremely close in the very competitive Southern California circuit. Omaha Beach was 1-1 or shorter on 5 different occasions before finally breaking through this February at Santa Anita. Omaha Beach’s first 3 attempts were on turf and the switch to dirt saw immediate improvement. His 3 turf speed figures (Equibase) were: 78, 93, 100. His dirt speed figures have been: 103, 109, 110, 109. Stretching out in distance has also seemed to help Omaha Beach.

Omaha Beach won the split division Rebel Stakes (as a result of not having the San Felipe Stakes, Oaklawn Park created two separate Rebel Stakes to accommodate the West Coast Derby contenders and the KY Derby points standings) and he also won the Arkansas Derby. Omaha Beach defeated both West Coast favorites Improbable & Game Winner respectively in those two races. And while Omaha Beach is a KY-bred, California-based Colt he has made his reputation as the Derby favorite in Arkansas.

He just keeps getting better and better. The switch to dirt has obviously helped him find his best form and he also has clearly done his best running as a 3-year old. Having Mike Smith select Omaha Beach OVER Bob Baffert’s Roadster is a clear indicator of where Smith believes this colt’s talent level is. Mike will ride often for Richard Mandella, but he’s fresh off a Triple Crown with Bob Baffert.

It’s also really difficult to ignore wins over Game Winner and Improbable. All 3 horses trained in California and shipped to Arkansas prior to their respective races at Oaklawn and each time Omaha Beach came out on top. This is a serious horse. Also I do respect Omaha Beach’s ability to win in crowded fields as no other race is more crowded than the Kentucky Derby. Omaha Beach has enough speed to have good position and seems like he can run forever at a high-cruising speed.

I can’t find a reason to NOT like Omaha Beach. But I can say that Game Winner & Improbable were both close enough in the Rebel/Arkansas Derby to see either (or perhaps even both) reversing the tables on a given day.

My Take on Omaha Beach

This is going to be a highly competitive field and if a horse bettor can really zone in on an individual horse this year Omaha Beach would be the one. But this is a really competitive field, Omaha Beach was 0-4 to start his career (failing as a favorite in those 4 tries). So if you are looking to knock Omaha Beach that’s where you look. But Mandella made the move to switch to dirt at the right time and this horse has exploded. I won’t be able to fade Omaha Beach in any multi-race wagers or exotic plays, but I do think this group does have enough talent and contenders that could also win the race. Much will depend on the trip and Omaha Beach has Mike Smith so you have to give him the advantage over all others.