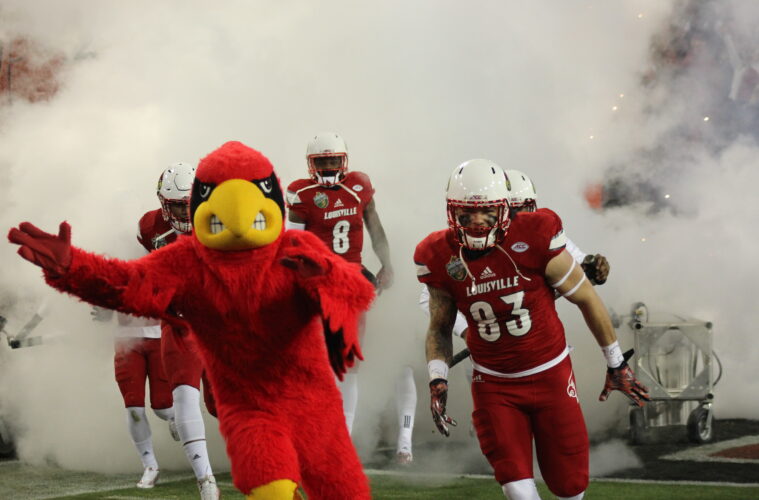 Louisville is going to beat Charlotte.  The questions are: By How Much?  How Long Will The 1st Team Play?

Charlotte is a team that turned the ball over at an alarming rate in 2015.  In fact, Charlotte was just 1 of 8 teams that turned the ball over more than the Cards did last season.  Louisville will be better offensively this season as we saw the Cards improve throughout 2015…..will Charlotte be that much better?  The 49ers have a good Quarterback, they do a nice job of rushing the passer AND they actually create a lot of turnovers on defense.

But that’s not enough.  Louisville will dominate this game in all 3 phases. Charlotte played just ONE Power 5 team in 2015, Kentucky, and was beaten 58-10.  The 49ers gained just 233 yards vs. the Cats AND ALLOWED 544 yards…and this game was in late November.  Here’s hoping that Charlotte is much improved and provides Louisville with a meaningful outing before they travel to Syracuse for their first road & first conference game of the season next week.

College Football has a few new rules changes that will affect the 2016 season.  Last month at the ACC Kickoff we went to a seminar conducted by Coordinator of Football Officiating Dennis Hennigan to educate the media on how officials were interpreting certain rules & also what new rules will be in affect for the new season.  While we disagreed with some of the explanations given by Hennigan on enforcement of rules from last season we appreciate the opportunity to understand the spirit of rules.

Here’s what we learned:

In 2016 ball carriers that slide feet first will be ‘Defenseless’ and defensive players who hit them will be subject to the targeting rules.

The controversial part of this rule will be in spotting the ball as officials have been instructed to mark the ball at the point in which the slide begins.

Tripping intentionally while using the lower leg to obstruct an opponent below the knees is now enforceable with contact to the ball carrier.   Previously the tripping penalty omitted the ball carrier, but now provides the ball carrier with protection.

This rule will definitely become apparent in the first few weeks of 2016.

Teams with the lead can not benefit by penalty in the last two minutes.  If the game clock is stopped to administer a penalty with a team in the lead inside the last two minutes of a half the game clock will start on the snap.  The only exception will be 10 second runoffs.  Officials have been asked to strongly consider unfair clock tactics in the final 5 minutes of each half as well.

The Auburn vs. Louisville game was a key example when deciding this change.  The rule was long overdue to be amended as teams with the lead and the ball could commit a holding penalty and have the yardage enforced with the game clock to start after the ball was set ready to play rather than at the snap.

Head coaches may request that one of the 3 timeouts in each half (and OTs) be a full timeout.  All other timeouts will be 30 second timeouts, unless TV elects to go to commercial.

All Targeting Fouls To Be Reviewed  & Collaborative Instant Replay

The replay official will review all targeting fouls.  The replay official can also interject and call ‘egregious’ targeting that is not called by the officials on the field.  Collaborative replay will be used by the ACC in an experimental season whereby the league office (in Greensboro, NC) will work with the onsite replay official to attempt to have uniform rule interpretations.

The NCAA Football Rules Committee released a statement in March saying that the committee believed that players were incorrectly disqualified from games in a small number of cases last season.

Players with 2 Unsportsmanlike Penalties are ejected, that now extends to coaches.

Hot button topic from coaches imploring officials to enforce the 3-yards to draw the ineligible man downfield penalty. No new rule, but officials have been tasked to ‘stringently enforce’ the 3-yard limit on lineman blocking downfield on pass plays.

There was a proposal in the rules committee to reduce the limit from 3-yards to 1-yard but that rule was not enacted.  So look for greater emphasis of this in 2016.

Tickets are SOLD OUT on Ticketmaster, but fans who wish to attend can find some reasonably priced tickets onStubHub HERE.

CardMarch will happen in its usual location from Central through the tunnel & into Gate 4. The Thornton’s Academic Center for Excellence Construction is complete and services will return to normal after a year of disruption.

Stadium personnel are introducing a new customer service platform this season that includes participation by the full game day staff throughout the stadium.  “We are here for you” is a commitment to fans, donors and guests to improve everyone’s game day experience and assure that no question goes unanswered.  It includes city and campus police on the streets around the stadium, parking lot staff, security and ushering staff, concession and catering personnel, cleaning contractors and physical plant staff who are all working to provide the best game day experience in not only the ACC, but in the NCAA.

In an effort to reconnect parents with lost children, UofL is providing a Tag-A -Kid program at Papa John’s Cardinal Stadium.  Parents are encouraged to visit the nearest Customer Relations Booth to receive a wrist band on which they can include their contact information and attach to their child to speed reconnecting any inadvertent separations that may occur.

Patrons who need assistance before they enter the stadium can look for our new Customer Relations staff that will be located throughout the stadium parking lots.  These staff members will be available to answer questions and relay information to the stadium command center on game days to help make everyone’s tailgating experience the best it can be.

Papa John’s Cardinal Stadium provides golf carts throughout the stadium Bronze and Green lots for patron assistance to and from the stadium for every home game.  These golf carts will help fans with accessibility needs to make the trip from the parking lot to the stadium gates.  The carts are designed to transport One Customer and One Companion.  Fans parking in any of the Green lots should walk to the west drive lane — which runs parallel to the train tracks — to find the Accessibility Shuttle Service.  Golf carts will be stationed at Gate 5 at the end of the game for transport back to vehicles.

Fans are encouraged to participate in the pregame CardMarch, which provides fans an opportunity to greet the Cardinals and cheer them on as the team enters the stadium.  The team will be dropped off on the south side of the Denny Crum Overpass on Central Avenue two hours and 15 minutes prior to kickoff (for example, 9:45 a.m. for a noon kickoff). With the assistance of the UofL marching band and spirit groups, the team will walk from the Green Lot, through the tunnel and into Papa John’s Cardinal Stadium. Fans are invited to arrive early and create an entrance way for the players as they head into the stadium.

Wheelchair assistance will be available for all home games for fans needing assistance to get from the stadium entry gates to the concourse/vomitory near where they are seated.  Fans are able to connect with the nearest usher/security guard at every stadium gate and ask for assistance.  Fan Assistance staff will arrive with a wheelchair and provide assistance to the fan in need.  This service will be provided both before and after UofL football games.

Fans just need to contact the stadium at 502.852.0083 prior to leaving the stadium. A Fan Assistance staff member will then return to meet the fan and provide a ride back to either the Accessible Shuttle Service golf carts at Gate 5 or the nearest stadium exit gate.  Be advised that these staff members will not leave the stadium.  Fans that are in need of assistance to their vehicle in either the Bronze or Green parking lots will need to utilize the Accessible Shuttle Service golf carts located at Gate 5.

A curtained area for mothers to breast feed their children is available within Customer Relations Booths located at Sections 108, 120 and 132.

Papa John’s Cardinal Stadium has the capability to receive text messages from fans who want to report unruly fan behavior or any other issue without leaving their seat.  Text “VILLE” <space> with the issue and location to 69050.  A stadium staff member will let you know that we have received your text message and will work to ensure the issue is being addressed.

The broadcast will be available on Louisville Sports Properties and the Tune In Mobile App on 840 WHAS & 790 WKRD.  The legendary voice of the Cards Paul Rogers will provide play-by-play with former Cardinal Offensive Lineman Alex Kupper providing color and Jody Demling from the sideline.  The Louisville broadcast will also be available on Sirius Channel 132 and XM Channel 194.

The television broadcast of Louisville vs. Charlotte will be on the Regional Sports Network (locally on Fox Sports South) Matt Devlin will provide play-by-play with James Bates providing color and Jenn Hildreth on the sideline.  Fans can also tune in on the WATCHESPN app live (outside the Louisville area) and later for replay.