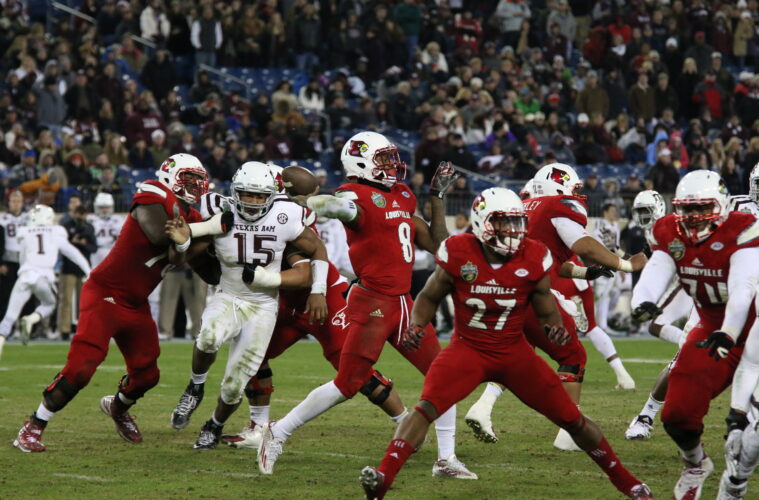 It was evident that Lamar Jackson played off instinct a year ago. Jackson has admitted that he pre-determined what he was going to do prior to the snap for most of the 2015 season.  The Louisville trigger man didn’t have a good concept of the Bobby Petrino offense and the results were pretty acceptable.  But this offseason Lamar Jackson committed to a playbook for the first time in his life (his high school didn’t use a formal playbook) and Bobby Petrino forced his Quarterback to work on pocket concepts this past Spring.

Make no mistake Bobby Petrino isn’t going to attempt to try to reign in the natural ability of Lamar Jackson and his running game…….but he’s definitely going to develop the passing talent of one of the best arms on planet earth.  Prior to arriving at Louisville as a freshman Lamar’s friends filmed the Cardinal QB throwing the ball 95-yards in the air.  Jackson’s arm is as live as his legs and Petrino is just the coach to utilize both weapons to their full advantage.

Prior to Fall Camp we saw Lamar Jackson’s deep ball was right on the money.  During the Fall Camp practices we were able to watch Jackson was still destroying the defense with the deep ball, but now Lamar will get under center giving him the option to use play-action.  Also in Fall Camp we saw Lamar get together in a BUNCH of different formations and with a lot of different personnel groups.  That’s interesting given the different defenses UofL will play and the tactics that teams will use to try to stop the Cards.  Having the ability to change the technique & style and not change your QB…..well…. that’s lethal.  And that’s what the Cards will be offensively this year with Lamar Jackson at Quarterback. Think Heisman.

What will happen now that Lamar Jackson has a better understanding of the offensive concepts and his teammates also will have a better idea of what the Louisville QB will do as well?  How much better can Lamar be in 2016?   Getting under-center will DEFINITELY add a layer of deception particularly in giving UofL options in the play-action department AND getting the running backs involved in the traditional run game……… ALL of which makes Lamar Jackson more dangerous running & passing.

Coach Petrino is going to attempt to make any defense playing 2-man against Lamar Jackson pay for the error, but the Cards will have to protect its QB.  We do think Lamar will use his legs as a ‘check down’ less and utilize the short routes & running backs more often or even burn the ball instead of attempting to run and losing yards. But that doesn’t mean he isn’t going to take off and run….it’s expected that he’ll take off more wisely.  In 2003 & 2004 Stefan LeFors had very few run plays actually called for him but still managed to gain over 400 yards rushing as a junior while using the run as a checkdown…… fans should expect to see better decision making from Lamar, larger distribution to the other skill players on offense and overall greater efficiency from the Louisville Offense as a result of the evolution of Lamar Jackson.

Kyle Bolin returns as the #2 Quarterback.  Louisville’s Quarterback situation was influx throughout the 2015 season and Petrino leaned on Kyle a great deal to win games.  Bolin is a confident & capable QB for the Cards and has performed well against top competition over the past two seasons.  Kyle was the QB for the entire Clemson game last season when UofL hung in with the national runner-ups into the 4th quarter before falling 20-17.  Bolin has experience and pedigree and if the ball gets turned over to Bolin in a critical situation he’s shown that he can be ready to execute and will bring much needed energy when given the opportunity.  Bolin has also proven to be a major asset in the locker room as a great teammate and ambassador of the Louisville Football program.  The best thing about Kyle being the #2 QB is that coaches, players, & fans all know what they are getting with Bolin at QB and would go into games & critical situations with confidence that he can get the job done.

The Cards have also added highly touted true freshman Jawon ‘Puma’ Pass.  Pass came to UofL with offers from most of the major programs in college football and chose to come to UofL to learn under Bobby Petrino.  Right now we believe that Pass is a likely redshirt candidate.  It’s clear that “Puma” has major talent but it’s also clear that he’s got some things he needs to work on in order to challenge Lamar or Kyle Bolin for snaps in 2016…..now could that change throughout the season?  Absolutely.  We saw Kyle Bolin in Fall Camp in 2014 look like a Quarterback searching for an identity and then 3 months later set the field on fire at PJCS in the final game vs. Kentucky.  So we’re not writing off Jawon Pass just yet for 2016, but there’s a reason RGIII, Jameis Winston, Johnny Manziel and Marcus Mariota all redshirted in their 1st year of College Football….it’s a tough position to play.

It is an interesting question to see what would occur if Petrino needed to go down to its 3rd Quarterback option.  Would UofL use Pass’ redshirt season?  Would Petrino elect to move Reggie Bonnafon over as an emergency QB?  Or would the Cards elect to use walk-ons Ethan Horton & Sean McCormack?

The Cards have finished just one season since 2002 (the 2013 season) with one Quarterback starting and finishing each game without an injury.  So odds are that Coach Petrino is going to have to turn the keys over to Kyle Bolin at some point during the season, but could Jawon Pass accelerate his expected learning curve and see the field in 2016?  We’ll just have to wait and see.