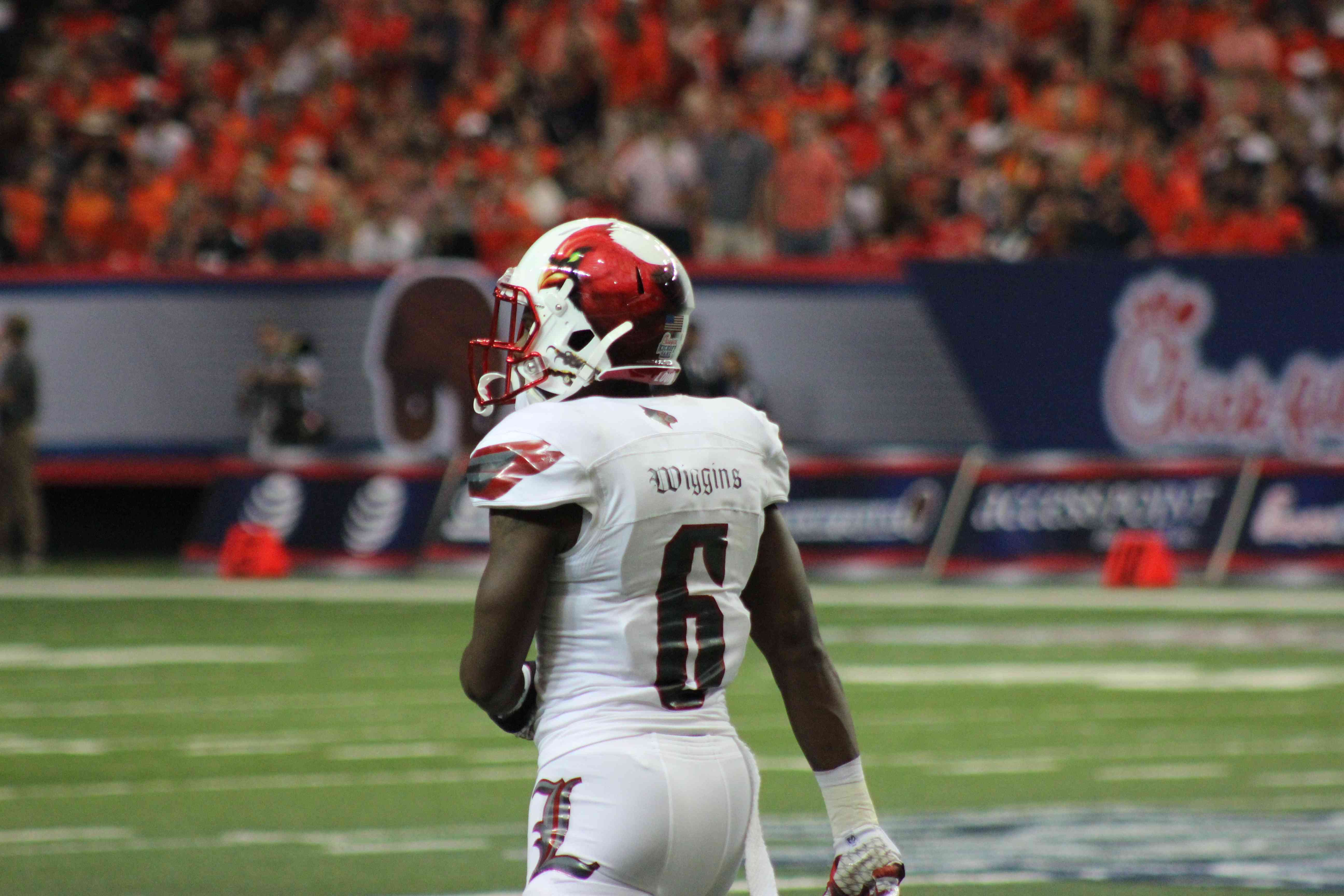 Starting with the Cornerbacks Shaq Wiggins & Trumaine Washington were solid at Corner last year and Jaire Alexander continued to emerge as a talent throughout 2015.   This Cardinal trio of Corners returns again and hopefully a year better.  Trumaine was extremely disruptive in a variety of ways and had a string of causing turnovers that went for UofL for Touchdowns. Washington is very good in coverage, and is an excellent open field tackler.  Tackling in the open field also applies to Jaire Alexander who this Fall Camp has played some ‘Star’ position (in DIME) that is typically played by Josh Harvey-Clemons.  Jaire as a punt returner is also a weapon, but it’s his ability to be a complete CB as a sophomore that is so exciting given how well he played last season as a true freshman.  Where is the ceiling for Jaire?   Shaq Wiggins proved that he can handle being on an island with some of the ACC’s best Wide Receivers, but does need to tackle better than he did in 2015.  Overall this Louisville Cornerback triumvirate will likely be the main corners.

But that doesn’t mean that there isn’t room for competition.  Cornelius Sturghill was/is Louisville Football’s fastest player but was tragically lost for the season when he was visiting his home in Memphis, TN and was shot in a drive-by shooting.  While it’s just another reason to never visit Memphis, Sturghill is lucky to be alive and the Cards will be without one of its most athletic players.  Meanwhile Ronald Walker has put on a show during the Open Practices we’ve been able to observe.  If the Cards are looking for physical Cornerbacks who can tackle in the open field & come up and provide run support Ronald Walker fits the bill.  Walker was an early enrollee JUCO (#2 overall CB in JUCO) and originally signed with Ole Miss out of high school.

Additionally the Cards have converted wide receiver Alphonso Carter from wide receiver in order to get his athleticism on the field. Carter has been plagued by hamstring issues that occur when he runs straight ahead (when he runs routes) but isn’t as problematic when backpedaling in the secondary.  Carter missed some of the Open Practices we were able to get into and his snaps were also limited.  We saw a lot of his athleticism returning punts last season, but we don’t think we saw enough from Alphonso in the Open Sessions to get a solid feel for where he is in the pecking order of Louisville cornerbacks.

We’re also impressed with true freshman Chris Taylor-Yamanoha who was really pressed on several occasions during Open Practices. It was clear that CTY was still adjusting to the pace of his 1st collegiate camp (and the hot/muggy weather of Louisville compared to Northern California). But we really liked Chris’ athleticism, length & attitude.  He’ll be a factor in the Louisville secondary in the coming years though he may be a redshirt in 2016.  Also we’ve really got to throw a shout-out to walk-on Aaron Floyd in this section because in a few of the Open Practices where Washington, Wiggins & Alexander were out or limited Floyd more than held his own and battled admirably against the 1st unit.   If the Cards need a corner in a pinch, Floyd can do the job.

At Safety Chucky Williams, Josh Harvey-Clemons and Zykiesis Cannon all return as players who started for the Cardinals.  One thing is for sure Dee Smith IS A BALLPLAYER!!! We think these 4 guys will mix and match in a variety of different ways throughout the season.  Chucky Williams & Josh Harvey-Clemons both cover a lot of ground and pack a punch once they arrive to ball carriers and different formations will require JHC to play the “Star” (like NICKEL & DIME) where Chucky Williams will also move over to Strong Safety and Dee Smith will play Free Safety.  Dee covers a great deal of space, shows great instincts and is disruptive in the passing game. Zykiesis also brings a lot of physicality and is a definite factor in the middle of the field for the Cards.  Cannon probably makes his biggest impact on Special Teams but Louisville is going to do a lot of different things with its defense that will require its personnel to be flexible…..which makes it difficult to really position these guys into anything other than a theoretical base defense with the understanding that the base defense is more the exception than the norm.

The play of Dee Smith & Jaire Alexander both may necessitate  a shift in how Louisville’s secondary (and maybe the defense overall) is set up. The Cards have a lot of really good safeties & corners in the secondary and at the very least UofL Football will have tons of depth in the defensive backfield….but it may also give Todd Grantham more options to give offenses different looks defensively. During Fall Camp’s Open Practices we saw the Cards operate a ton of DIME packages getting the Cardinal Secondary a lot more work.  This may have been a response to having ILB Stacy Thomas out for an extended period of time OR it may have been a fundamental shift for the Cards this season.  We’ll have to see.  If the Cards do implement a lot of DIME JHC is a quasi OLB,

It appears that Safety Terrence Ross & UofL have moved on from one another.  We’re not sure about what Ross’ current status is or if he’s with another program.  But the Cards do have a lot of youth and depth at Safety that is exciting for the future.  Khane Pass has a lot of talent and after redshirting a season will be ready to find the field in various capacities especially in Special Teams in 2016.  The same goes for London Iakopo who comes from Junior-College. It’s clear that Iakopo & Pass both can run and tackle, but London is probably a little more phsyically mature than Khane (he’s older).  Both players routinely draw praise from the coaches and it’s going to be worth watching out to see the development of both throughout 2016.

True Freshman PJ Blue & Lamarques Thomas both look AWESOME.  PJ Blue is probably going to play as a true freshman in certain situations (because why redshirt a player who would just enter the NFL Draft after a redshirt junior season?).  He’s a future monster for the Cardinal Defense and just needs to learn the system and gain experience.  Lamarques Thomas is flexible in that he can cover man on man or drop like a traditional safety.  Larmarques just needs to develop his body the right way in the weight room.  Both of these guys are future stars, PJ Blue probably a little faster than Lamarques because he’s more physically ready.

Finally when a walk-on gets to his senior year…….it’s worth mentioning.  John Stitch can play some football & understands the concepts of the Cardinal Defense.  He may not be a name that ever gets the headline, but he’s a guy Cardinal Fans can be proud of.