Gus Malzahn called Carl Lawson “Unblockable” after a recent scrimmage.  The former Freshman All-American was a pre-season ALL-SEC selection a year ago before a knee injury forced him to miss the 2014 season.  But if Lawson is ‘unblockable’ he definitely does a nice job of blocking any questions regarding Auburn’s 1st opponent. 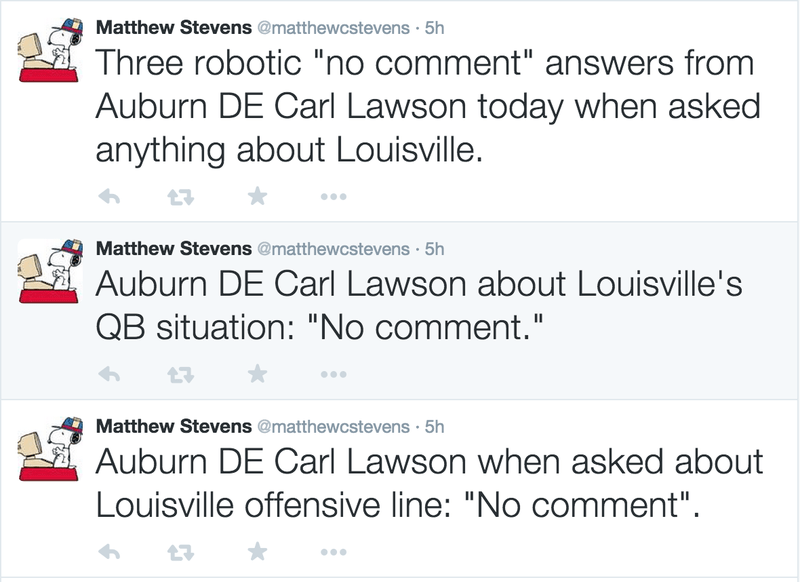 This could be a late addition to @CrumsRevenge video. Greg McElroy and his ginger hair pelt makes his UofL/AU pick. pic.twitter.com/sVSj41o7PR

Louisville Football recently awarded scholarships to 7 walk-ons for the 2015 season:  Griffin Uhl, Darius Skinner, Aaron Ahner, Toriano Roundtree, Malin Jones, Dontez Byrd, and Colin Holba.  It’s quite an achievement for players who join the program as a walk-on to be awarded a scholarship.  Congratulations to these guys.

UofL awarded its first of many prizes for the 2015-16 season in what it is dubbing “The Year of the Fan”. Jerry & Yvonne, a big-time Cardinal family and CAF supporter were granted with airfare, hotel, tickets, and VIP access to the Chick-fil-A Kickoff Classic next weekend vs. Auburn.