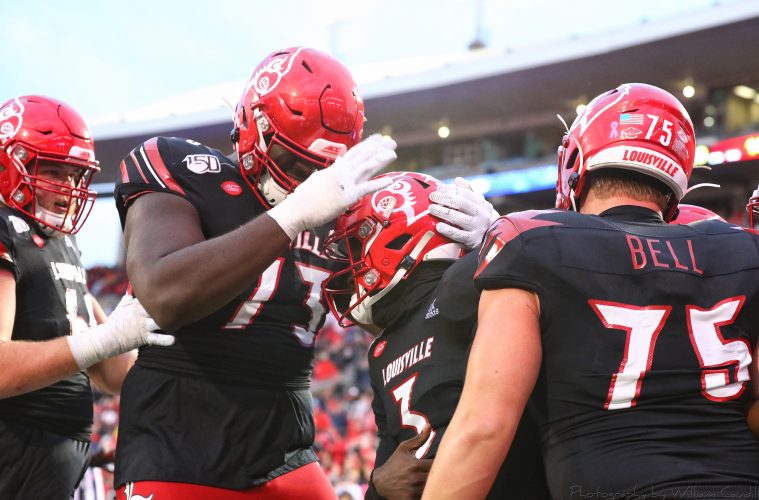 The 2019 Louisville Football team did something that very few college football teams have done. The Cards allowed 100+ Tackles For Loss and had a Top 25 Offense. These two stats don’t normally correlate. In fact it’s only happened 5 times in the past 11 seasons of college football.

Louisville actually finished LAST in Tackles for Loss Allowed in 2019…. and finished in the Top 25 of Total Offense…….. AND no team has allowed more TFLs in a single season than Louisville Football in College Football History. The only program to come close to 129 TFLs in the past eleven college football seasons was Wake Forest in 2014 with 127 TFLs Allowed. The Demon Deacons finished 3-9 that season with the 128th Offense (dead last in 2014).

One of the reasons UofL was able to overcome all of those TFLs is because on 3rd down with 7-9 yards to go, the Cards were #13 in yardage gained while passing. And Louisville was #1 in the nation when RUSHING on 3rd & 10+ with 241 yards gained, trying to earn the yardage to gain 36 times in 2019. Additionally Louisville finished 3rd in the nation in plays of 40+ yards or more in 2019. Louisville Football in 2019 was quite literally boom or bust and the booms made up the busts more often than not. Can that continue?

Odds are if you give up a lot of TFLs you’re going to be a losing team.

BUT Louisville wasn’t a losing team in 2019 and they weren’t a bad offense either. What does that mean for the future?

How Does The Louisville Offensive Line Improve in 2020?

Also Louisville is replacing Tyler Haycraft at the other Tackle position. Haycraft was a good college football player who is getting his shot with the New York Giants in training camp. And with BOTH of Louisville’s starting tackles being replaced and both of those players in NFL training camps, how can we expect UofL Football to solve it’s TFL problem?

The Cards are returning all 3 of its interior starting offensive lineman from a year ago: Center Cole Bentley, Right Guard Robbie Bell and Left Guard Caleb Chandler. UofL also is returning its offensive line coach Dwayne Ledford who has now put two OLinemen into the NFL’s 1st Round in consecutive years.

Cole Bentley has shifted from guard to center for his entire career, it should benefit him to know that he is the guy at Center since mid-way through the 2019 season. Robbie Bell missed the 2018 season dealing with an injury and was previously Louisville’s Center during the 2017 season and played all of 2019 at Guard for the Cards. He should be more comfortable than ever in his role. Lastly on the returning guys Caleb Chandler was really effective in his first full year in a starting role for the Cards (he did start 3 games in 2018).

Getting some veteran returnees on its interior and getting to Year 2 of these guys playing for Dwayne Ledford should solve some of the issues on the O-Line.

How To Replace Becton & Haycraft?

There’s no replacing Mekhi Becton. But Adonis Boone did a nice job in games against Miami & NC State (when Becton was injured) and then was really good in the bowl game versus Miss State. In those games the Cards played well offensively (496 yards vs. Miami, 326 yards vs. NC State, 510 yards vs. Miss State).

The Miami game is actually a good example of Louisville’s problem in 2019: 496 yards BUT 14 TACKLES FOR LOSS! Against NC State the Cards didn’t gain a lot of yards and did also allow 9 TFLs (which is a lot in a single game). And finally against Mississippi State again the Cards had over 500 yards and gave up 10 TFLs. Louisville was 2-1 in these games, but this many TFLs allowed in games is flirting with disaster.

Replacing Tyler Haycraft won’t be easy either, but it appears that Renato Brown is going to win the job. Renato played in 3 games last season (ND, EKU and FSU) and maintained his redshirt as a freshman. Brown has gotten rave reviews in practice. Out of high school Brown chose the Cards over Miami and also held offers Alabama, Florida, Georgia, Kentucky, Penn State, Pitt, Rutgers, South Carolina, Syracuse, Tennessee, and Virginia. Still replacing a veteran player like Haycraft who is currently in New York Giants training camp won’t be easy. Haycraft played a lot of college football and Renato Brown has a learning curve that can only be solved by playing more games.

Louisville Was 3rd in Nation with Plays Over 40+ Yards

If you are going to give up 129 tackles for loss, then your offensive is going to have to make up the difference somehow. And Louisville did in 2019 finishing 3rd in the nation with plays of 40+ yards. And when you have a receiver like Tutu Atwell you’re going to run a lot of long developing plays to try to negate the safety.

I think you’ll see Louisville still allow some TFL’s while attempting to get the ball deep to Tutu (and others), but fans may see UofL try to become more balanced in 2020 with more confidence in Micale Cunningham. Louisville had 302 passing attempts in 2020 and 568 rushing attempts (obviously QB scrambling and QB sacks tilt this out of the # of plays called) it’s clear that UofL really wanted to run the football in 2019 as they gained 2767 yards mostly with Javian Hawkins and Hassan Hall.

It stands to reason that Louisville Football is sitting on a big opportunity. An offense that can overcome a college football record in TFLs Allowed and still be a Top 25 offense is going to have a huge upside. But trimming those numbers down is going to be easier said than done. No Becton or Haycraft hurt, but perhaps some continuity will be the cure? Louisville fans have learned to not use the phrase, “Well it can’t get any worse” after 2018, Steve Kragthorpe and Ron Cooper.