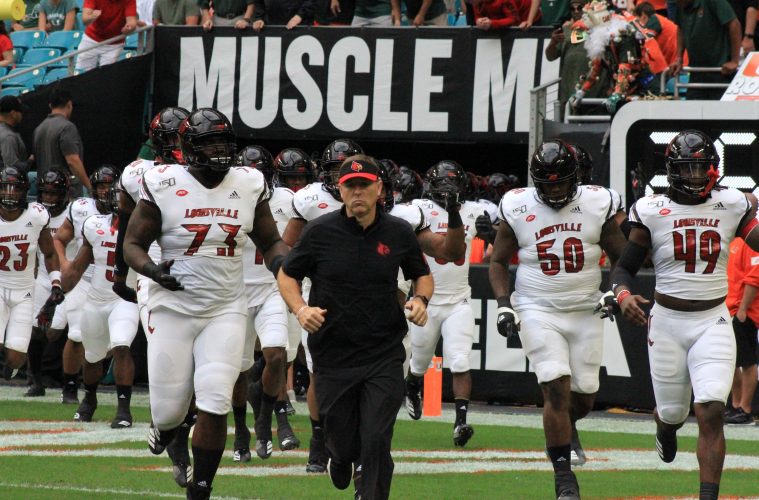 Louisville football has a new partner and hopes to maximize its potential on the recruiting trail.

For years the powers that be around collegiate sports have been unwavering on their stance and unwilling to engage in any sort of conversation pertaining to athletes being paid. Hundreds of decisions have been made and suspensions handed down to players who have somehow found a way to make a “profit” or build a brand for themselves, only to compromise their eligibility and hurt themselves.

The NCAA’s existence has always been built on “ensuring” the pureness of college sports and the “student-athlete” model. We can all laugh together thinking that the NCAA really cares about whether athletes are students first (the UNC academic decision really tells us all that’s needed) while continuing to pocket hundreds of millions of dollars from what has essentially become a free (or relatively cheap) labor source.

Over the years, this model has become big (and I mean big) business for the NCAA and has made them one of the most profitable sports corporations in the entire world, earning them $1.8 billon alone in 2018.

Meanwhile, a recent study conducted into how much the players who make up rosters for college football’s blue blood programs may be worth in a “free-agency” or free-market system, showed what we all have known for quite some time. Due to bylaws and outdated governing policies, players aren’t able to take advantage of the earning potential they’ve developed at these universities, both for their work on the field and off of it.

Of course, not every single college athlete is capable of generating the type of attention and hype that Williamson and Jackson did for their respective universities. And while the NCAA is mostly weary of bigger names taking advantage of the system (cough cough, Zion) they also do everything in their power to even limit that of athletes who aren’t household names. UCF kicker

Years of controversary and debates have now led governmental bodies to pass laws and regulations that will allow athletes in their states to earn a wage using their name, image, and likeness. California and Florida were the first two states to sign a bill into law, while many others have since proposed and are expected to follow suit.

With the NCAA sensing the changing of the tides they reluctantly got in line and soon enough players will be allowed to earn compensation in some form or fashion off of their name, image, and likeness.

We’ve seen trendsetting happen at Louisville before, and it appears that with the name, image, and likeness rules coming soon that Scott Satterfield and his staff see a competitive advantage in beginning to “market their players.”

You may or may not have noticed a new trend and subtle change from the Cardinals social media where they have been tagging players and including social media handles in pictures shared in attempt to get fans to follow those players. They’ve also created new personalized graphics to share with their committed recruits and even recruiting prospects, all with the intent to build name and brand recognition with fans.

Those changes appear to be in line with a tweet recently shared by Louisville’s Recruiting Coordinator, Pete Nochta. A tweet shared on August 13th read “No need to ask we will just tell you! At UofL Football we care about you sharing your story and building your brand! That’s why we have teamed up with the best brand building company on the market!!”

That tweet was referencing Louisville’s new partnership with OpenDorse, a social media/marketing firm created to “provide athletes with a lightweight solution to publish content from partners on social.” Basically, this is a platform that the program can leverage for its players that uses their social media following & influence to make money from branded/sponsored posts.

Opendorse was founded by two former college football players and according to their website have been conducting years worth of market study research, which means that this partnership could be a huge deal that went relatively uncovered.

This may seem like just another “public relations” announcement, which in a way it sort of is, but it’s much much bigger than that. In fact, this could end up being one of the single biggest changes in recruiting for Louisville as they position themselves to be the school that helps builds players brands.

Satterfield is one of many coaches who has had to adjust to changes coming down the pipe and while he sounded a bit reluctant shortly following the NCAA’s announcement his recent comments to Steve Wiltfong of 247 Sports on the Social Distance podcast show he’s come to support it.

“I’m all for these guys being able to capitalize on their name,” Satterfield said. “They deserve it. They created this great brand for themselves.”

The Alabama’s, LSU’s, Ohio State’s, and Clemson’s of the world will be able to continue getting the players they want just like they always have, but programs like Louisville can have a big time breakthrough in recruiting if they are able to help their players earn money from endorsements during their time in college.

Recruiting hasn’t been an issue for Louisville since Satterfield and company arrived, putting together the 40th best class in 2020 while currently boasting the 23rd best class in 2021. If you’ve been on social media for the last two years you see the culture change on the field and around the facility but also have probably seen the change in recruiting.

Top ranked players are starting to pay attention to Louisville thanks to the culture being built by Satterfield and that will likely only grow should they be able to help players earn wages in college off their own name brand.

The new Louisville football staff continues to get things right and because of it the future is bright for the Cards.