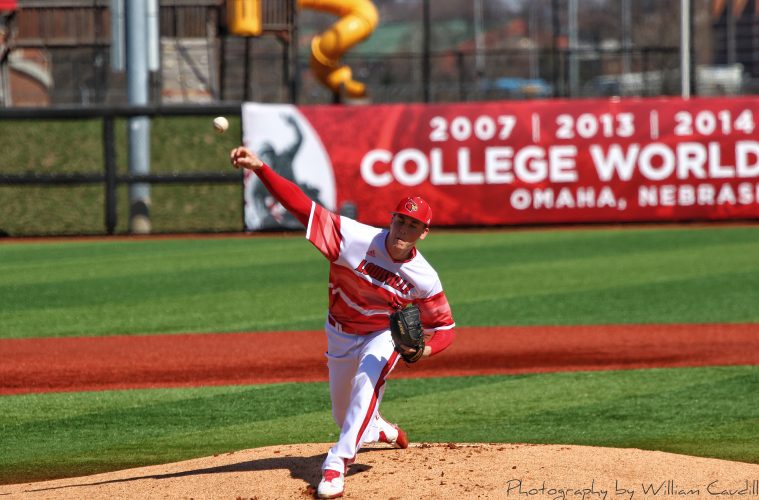 Facing their toughest task of the season, the #4 Louisville Cardinals (14-2) took on the #5 Texas Tech Red Raiders (16-3) at home in a rare two game series, and managed to split the series at one game a piece. A comeback rally fell short in game 1, but it would prove successful in game 2. Louisville’s next action will come against the Wake Forest Demon Deacons (7-10) in a 3 game conference road series in Winston-Salem.

While starting pitcher junior right-hander Bryan Hoeing had a sharp start to game, showing off the break in his curveball on a couple early strikeouts, Texas Tech wasn’t fooled for long. They would jump out to a 3-0 in the top of the fourth thanks to an error that brought home a run, followed by a bases loaded HBP and walk. In the bottom of the fourth, Louisville wouldn’t quite match what Texas Tech had put up, but an error by Tech would bring home sophomore first baseman Logan Wyatt after he had walked, and would cut the deficit to 3-1 by the end of the fourth.

Texas Tech wouldn’t take long to extend their lead, as they would plate two more runs in the sixth before Coach Mac had seen enough of Bryan Hoeing and would go to the bullpen. Even with the based loaded jam, newly inserted freshman lefty Michael Kirian would be able to work himself out of the jam and finish the inning without giving up any more runs.

The Red Raiders would add another insurance ran before Louisville finally found the scoreboard again in the seventh inning. Sophomore outfielder Jake Snider would record his second hit of the game and send home Josh Stowers for Louisville’s second run of the game. 2 of Louisville’s 3 hits came off the bat of Jake Snider. Hoping to prevent Texas Tech from continuing their dominance, sophomore left-hander Nick Bennett would make his first appearance since February 17th in the eighth and toss a scoreless inning.

Down 4 runs with two innings to go, the late inning rally would be on. Louisville would load up the bases, and they would pull within two runs off a walk by sophomore shortstop Tyler Fitzgerald followed by a wild pitch that would bring sophomore outfielder Drew Campbell home. Unfortunately for the Cards, Texas Tech would stretch the lead back out to 4 in the top of the ninth, and Louisville would be unable to respond in the bottom of the ninth.

Finding themselves in a similar situation like they had in their previous game, the Cardinal Nine were determined to not fall short this time around, as a late inning rally succeeded to bring down #5 Texas Tech, 7-4. Louisville scored the game’s final 6 runs, and it was their first win against a top 5 opponent since beating #5 Florida State 7-1 on April 9, 2016.

Jumping back up to #1 in the RPI after their victory the day before, Texas Tech wasted no time proving themselves. The Red Raiders launched a three run shot over the wall off of starting pitcher freshman-left hander Reid Detmers in the first inning of the contest. Fortunately for Detmers, these would be the only runs allowed on his behalf during his three inning start.

Tech would not score again until senior left-hander Rabon Martin would relieve Detmers in the start of the fourth inning. After allowing a run and working himself into a bases loaded jam, freshman right-hander Bobby Miller would make his way into the game to finish the inning, and then follow that up with three consecutive scoreless innings.

While they did find themselves in another early inning deficit, Louisville didn’t take quite as long to respond as they had the game prior. After a first inning which saw Junior second baseman Devin Mann sending Jake Snider home off a sacrifice fly, Louisville would once again mount a rally against the Red Raiders.

The rally was kicked off in the fifth inning by junior outfielder Josh Stowers with a lead off home run to cut the Texas Tech lead to 4-2, but the rally really took off in the sixth inning. Junior catcher Pat Rumoro would drive a ball through the left side to send Logan Wyatt home, then with the bases loaded sophomore shortstop Tyler Fitzgerald would reach on a fielders choice, and Jake Snider would come home on a wild pitch to finally take the lead.

Insurance runs in the seventh and eighth innings by freshman outfielder Drew Campbell and Devin Mann would further push Louisville lead to 7-4. To make sure the Red Raiders would not threaten with a comeback rally of their own, sophomore left-hander Adam Elliott and graduate transfer Austin Conway would combine for a scoreless eighth inning, and junior right-hander Sam Bordner would close the door in the ninth and secure the win as well as his 7th save of the season.