Selection Sunday has come and gone, and March Madness is now officially in full swing. It’s time for everyone to fill out an unnecessary amount of brackets and get absolutely nothing done at work while you hide from your boss and watch the games.

However, what if March Madness had a bit of a twist? Say… it featured a completely different sport?

What if, instead of the schools sending their basketball teams to do battle on the hardwood, they sent their baseball teams to square off on the diamond?

In a completely theoretical scenario, I attempt to predict how this year’s tournament would play out if all of the March Madness matchups were the school’s respective baseball teams playing for it all.

While is was difficult to break down some matchups, some were much easier than others. Only 13 of the top 25 ranked teams in collegiate baseball (D1Baseball Poll as of March 18th) were even featured in the Baseball March Madness tournament. Also, a surprising 10 of the 68 schools in the tournament field do not carry an NCAA sanctioned baseball team.

That being said, let’s take a look at Baseball March Madness! 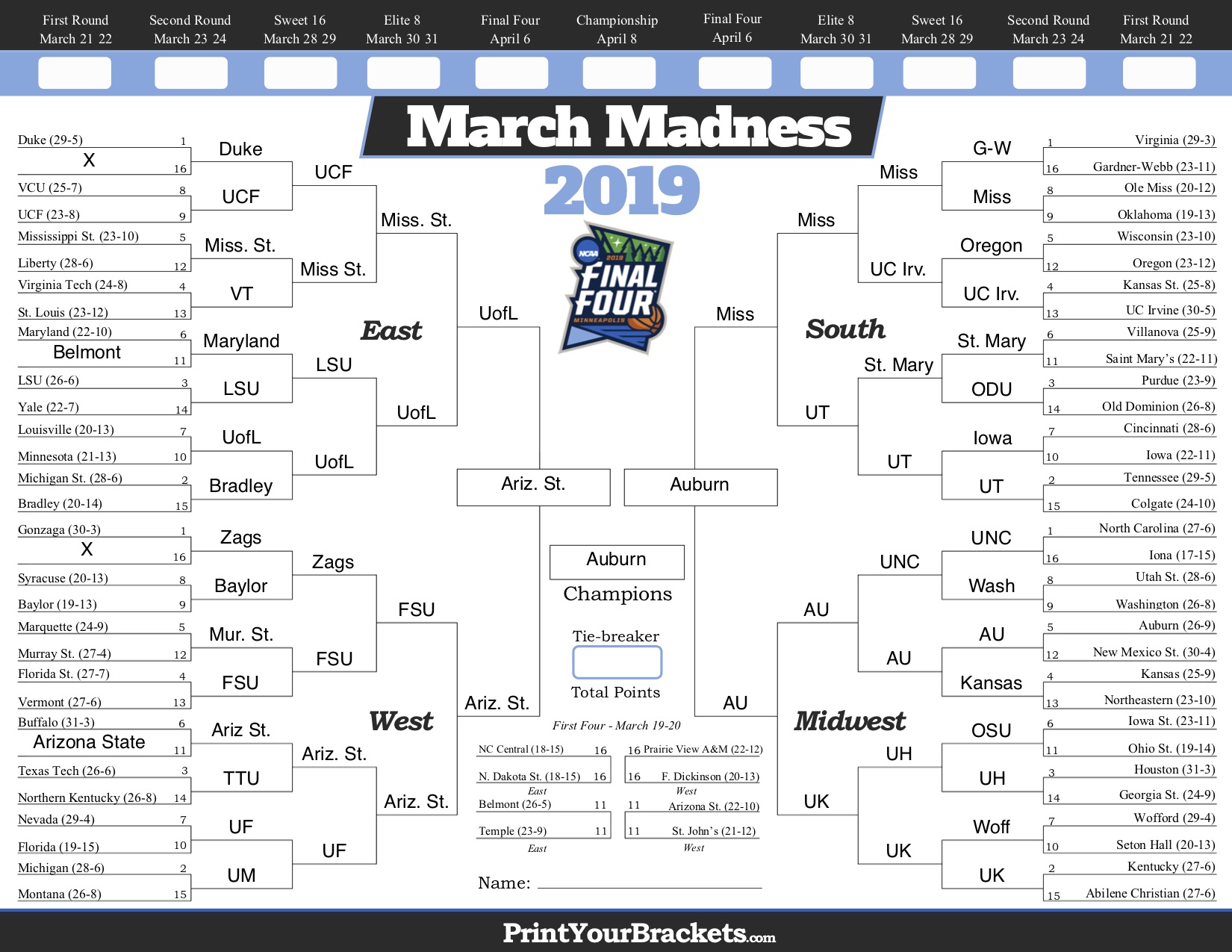 Other than the opening round matchup of UCF vs. VCU that features a pair of 14 win/top 50 RPI teams, there isn’t much great baseball to speak of until the region advances to the Sweet 16. That’s when the action really starts to peak, as this region actually features the two best games in the tournament from a rankings standpoint, both involving the #4 Louisville Cardinals. In the Sweet 16, the Cards will face off against the #10 LSU Tigers. RPI and Strength of Schedule favors Louisville, which sets them up for the tournament’s only top 5 matchup. For a trip to the Final Four on the line, the only thing standing in their way is the #2 Mississippi State Bulldogs. While Mississippi State edges Louisville in the polls, Louisville has double the top 100 RPI wins that Mississippi State does, on top of the fact that the Bulldogs have a Strength of Schedule of 186 vs. Louisville’s 25. This matchup, while technically an upset, sees the statistically better team advancing.

No team in the tournament has a tougher road to the Final Four than the #15 Arizona State Sun Devils, as the West Region is without a doubt the most loaded region in the tournament. However, they are more than prepared to handle the gauntlet of ranked teams as they are the last undefeated team in Division I baseball. The West Region is also the most exciting region in the tournament top to bottom, as the region’s round of 32 features a pair of ranked matchups. The Sun Devils do battle with the #19 Texas Tech Red Raiders (3rd in RPI), with the winner of that game taking on the winner of #14 Florida and #24 Michigan. Both Arizona State and Florida have accumulated 5 top 50 RPI wins, so both will advance to do battle in the Sweet 16. While Florida’s SOS is unrivaled to Arizona State’s, 19-0 speaks volumes over 15-7, so that sets up an Elite 8 matchup with college baseball’s all time winningest coach in Mike Martin and his #21 Florida State Seminoles. While a case can be made for FSU, they are fresh off a series loss to the nation’s second last undefeated team in #6 North Carolina State, so it’s hard to imagine a scenario in which they don’t lose to the only remaining undefeated team in D1.

Like the East Region, the South also features an exciting matchup right out of the gates. The #18 Ole Miss Rebels face off against the #25 Oklahoma Sooners, where SOS as well as 6 RPI top 100 wins give the Rebels the advantage. Like Arizona State, the Rebels also have an extremely tough road to the Final Four. Once advancing to the Sweet 16, they face their next tough test in the #23 UC Irvine Anteaters. While both teams are .500 against RPI top 100 competition, the superior SOS tips the scales in favor of Ole Miss, which sets them up with a duel against the Tennessee Volunteers with a trip to the Final Four at risk. While unranked, the Vols are an impressive team with a 17-4 record and an RPI rank of 17th. However, they are 0-3 against teams in the top 50 RPI, leading to believe the history would repeat itself and send the RPI 29th Ole Miss Rebels to the Final Four.

The Midwest Region features arguably the least amount of solid baseball action in the tournament, with only 2 top 25 & 3 RPI top 50 teams in this region. The marquee matchup in this region is without a doubt the Sweet 16 contest between the #12 Auburn Eagles and the #16 North Carolina Tar Heels. While UNC has an impressive 5 RPI top 25 victories, Auburn has an even more impressive 7 victories on top of having the second highest RPI ranking in the tournament (Texas Tech). This will prove to be their most difficult obstacle on their journey to the Final Four, as their Elite Eight matchup pits them against the RPI 74th Kentucky Wildcats. After having to deal with a highly touted squad in North Carolina, War Eagle should have no problem against the Wildcats.

While on paper, Louisville does present the advantage over Arizona State in terms of RPI and SOS, sometimes the biggest key in March is who has the most momentum. Louisville has plenty of momentum of their own with a solid resume, but Arizona State has the most momentum out of anyone in the country. In an upset on the biggest stage in the nation, I choose the Sun Devils to make it to the championship game.

In both team’s second consecutive SEC matchup, Auburn vs. Ole Miss is set to be a great matchup. Both teams have impressive resumes, but Auburn’s 18-2 record as well as their 7 RPI top 50 wins gives the Eagles the advantage and sets them up with Arizona State in the championship game.

While I have previously mentioned that in March, sometimes the biggest key is the momentum you are riding, sometimes that can only get you so far. Auburn is also riding a double digit win streak at 13 games, and their SOS of 46 vs. Arizona State’s 153 could be just enough to unseat the nation’s last remaining undefeated team. In a close matchup, I choose the Auburn Eagles to be at center stage when the clock hits zero.