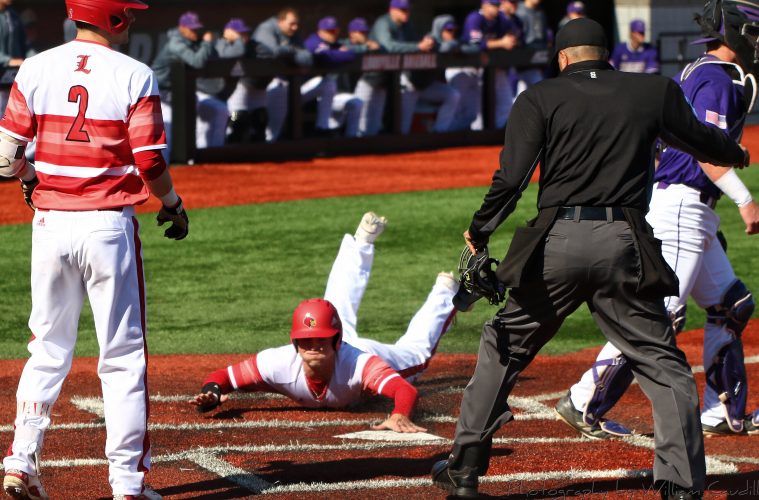 Diving into their first ACC action of the season, the #8 Louisville Cardinals (14-1, 2-1) welcomed the #13 North Carolina Tar Heels (8-7, 1-2) for their first ever trip to Jim Patterson Stadium with a 3 game weekend series. Louisville won the series for their 27th ACC series victory in 31 tries, yet lost the undefeated season due to a late inning rally in the Sunday series finale.

Next week, the Cardinals take on the Texas Tech Red Raiders (14-2) in a rare two game home series before hitting the road in a weekend three game series against the Wake Forest Demon Deacons (7-9, 2-1).

In the first ACC contest of the season, the Louisville Cardinals took on the North Carolina Tar Heels in a chilly partial night game, and came out on top 5-4 after a close play at the plate by Logan Wyatt to score the go-ahead run in the eighth inning. The game was dominated by mostly pitching through the middle innings until the bats on both sides started to come alive.

Junior left-hander Adam Wolf made his fourth straight Friday start of the season, and while Wolf had relatively little help from the starting lineup while he was on the mound, he put up yet another solid start. Aside from allowing 2 runs in the second inning and working into a two-runner jam in the sixth, he was in typical Adam Wolf form, striking out 7 batters and only allowing 2 runs on 5 hits and 3 walks through 6.0 IP.

Held scoreless through 5 innings, the Cardinal Nine would finally break through and find the scoreboard in a big way in the sixth. Junior outfielder Josh Stowers would lead off with a double, and then junior second baseman Devin Mann and designated hitter Danny Oriente would follow that up with back to back walks to load the bases for first baseman Logan Wyatt. Wyatt then connected on his first collegiate triple to clear the bases and send all three Cards on the bags home to make it 3-2 through six innings.

Finding himself in a jam in the sixth yet in line for the win after Wyatt’s triple, Coach Mac decided that his bullpen would give him the best chance going forward and inserted freshman right-hander Bobby Miller in the seventh inning. Miller would work himself into a 1-out bases loaded jam before getting replaced fellow freshman Michael Kirian, where he would then give up a bases loaded walk to tie the game at 3-3 before retiring the final two batters of the seventh.

The game would not remain tied for long though. A couple HBPs on behalf of sophomore catcher Pat Rumoro and Josh Stowers would bode nicely for Jake Snider, as a single up the right side would bring home sophomore shortstop Tyler Fitzgerald who had reached on a fielder’s choice after Rumoro’s HBP. However, UNC responded quickly as they would tie the game in the eighth inning with a solo shot over the left field wall, given up by newly inserted graduate transfer right-hander Austin Conway.

Louisville would be determined to not let the first ACC game of the season slip away from them. First baseman Logan Wyatt would make his way to third base following a walk on his behalf, and a wild pitch would send Wyatt running for home plate. A very impressive swim move at the plate to avoid the tag by the catcher would insure that he would plate the go ahead run in the bottom of the eight to make it 5-4. All-American junior right-hander Sam Bordner would come into the game in the ninth, and do what have does best and shut the door on the Tar Heels for his 5th save of the season.

Typically a reliever by trade, sophomore right-hander Shay Smiddy had done enough in head coach Dan McDonnell’s eyes to earn the starting role in game 2 against UNC. He, as well as sophomore first baseman Logan Wyatt and junior second baseman Devin Mann would help clinch the opening ACC series for Louisville, as the Cards would defeat the Tar Heels 6-4.

In his first innings as a starter, Smiddy put up a solid outing by striking out a career best 7 hitters and only allowed 1 earned run off 3 hits and 4 walks in 5.0 innings pitched. A bases loaded jam in the third inning would be compounded by a throwing error by sophomore outfielder Danny Oriente and allow UNC to see the scoreboard first, making it 2-0 by the middle of the third.

Finding themselves in familiar position with being down early, Louisville knew exactly how to respond. A single by sophomore third baseman Justin Lavey and back to back walks by sophomores outfielder Ethan Stringer and designated hitter Jake Snider would load the bases and give the Cards the opportunity to do some real damage. Junior second baseman Devin Mann would deliver on that opportunity and drive a ball deep into the left center field gap to clear the bases on a stand up double and give Louisville the 3-2 lead after three innings.

Next up in the fourth, the Cardinal Nine got back to work in trying to further push their lead against the Tar Heels. A double off the bat of Justin Lavey would set up an RBI single for Ethan Stringer, and then a Josh Stowers single would set up a 2 RBI double down the left field line off the bat of Jake Snider. This would be the end of the scoring on Louisville’s end with 6 total runs plated.

Once it was made into a bullpen game after Shay Smiddy’s day was done, UNC would try and make it interesting with a couple earned runs allowed from freshman left Reid Detmers in his 2 inning appearance. However scoreless innings from graduate transfer Austin Conway and junior Sam Bordner would not only allow the Cards to shut the door on the Heels, but also allow Bordner to earn his 6th save of the season.

Capping off the first ACC weekend of the season, Riley Thompson’s career high in strikeouts was not enough as the Cardinals ran into their first roadblock of the season with a 10-3 loss. A furious late inning rally by the Tar Heels including an eighth inning shellacking, proved too much to overcome and it helped sink the undefeated season.

For the third time in a row UNC was able pull out in front early on in the game, plating a single run in the second inning. Like the games prior though, Louisville would counter the early deficit. Two doubles in the second inning by Logan Wyatt and sophomore outfielder Drew Campbell would bring home Wyatt to tie the game, then a bases loaded 2 RBI single by Justin Lavey would put the Cardinal Nine in front 3-1 by the end of the first three innings.

UNC would try chipping away at the Cards’ lead, responding with a run of their own in the fourth inning. But starting pitcher junior right-hander Riley Thompson set the pace from the mound, hurling 10 strikeouts on the day, the most by a Cardinal pitcher so far in the 2018 season, and the most since Brendan McKay (4/28/17 vs. Toledo). Through the first six innings of his start, he only allowed 2 earned runs off 4 hits and 2 walks.

The long start would definitely start to wear down on Thompson though. His 103rd pitch of the game in the seventh inning would allow the Tar Heels to finally catch up to Cards, then a single and an error after that to break the tie in UNC’s favor would force Coach Mac’s hand and go to the bullpen. Senior left-hander Rabon Martin gave Thompson some much needed relief after recording one out in the seventh, and he would finish the inning without giving up anymore runs for UNC.

Trying to prevent getting swept, UNC did everything in their power when junior right-hander Liam Jenkins was inserted into the eighth. Capitalizing on a throwing error, they would load up the bases with one out remaining, drive in a 2 RBI single right up the middle, then follow that up with an RBI double deep into the right field corner. Once a wild pitch would make it an 8-3 ballgame, sophomore left-hander Adam Elliott would be called on to stop the bleeding.

This would not be the case, as UNC would continue their inning with a vengeance with another 2 RBI hit, this time with a double down the right field line before the run onslaught would finally stop. A scoreless ninth inning tossed by sophomore right-hander Austin Dickey would not be enough for Louisville, as they could not get anything done in the bottom of the ninth and the 10-3 score would hold.