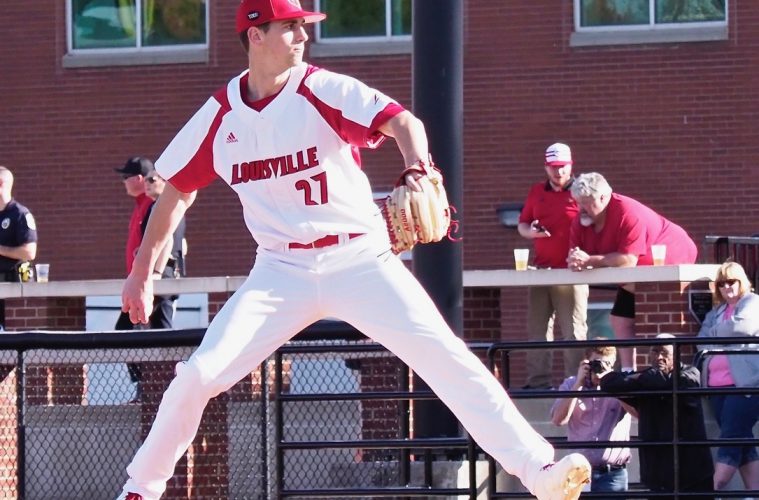 Playing a month’s worth of mostly cupcake competition to get the team warmed up and to get a lot of the young guys some valuable playing time has so far proved to benefit the #8 Louisville Cardinals (14-1), after they won their first ACC series of the season against the #13 North Carolina Tar Heels (8-7) two games to one. Despite the impressive 14-1 mark so far in the 2018 season, this upcoming week could quite possibly be a barometer for how the rest of the season will play out.

The Cardinal Nine’s mettle will certainly get put to the test this week, as the #3 Texas Tech Red Raiders (15-2) will roll into town for a two game midweek series. They’ll have no time to rest, as they will follow that up with a 3 game ACC weekend road series against the surging Wake Forest Demon Deacons (7-9). Texas Tech will be looking for redemption in the Bluegrass State, having lost their first couple games of the season to the hands of the #6 Kentucky Wildcats (14-3) in Lexington, and Wake Forest could be riding the momentum high after beating the #4 Florida State Seminoles (14-2) two games to one. Even after losing the series to Kentucky, Texas Tech sits at #2 in the RPI (were #1 prior) and Wake Forest rockets up the RPI rankings from #198 to #92 after their series win against the Noles.

All Louisville Baseball games are ticketed entry this season for the very first time, and can be purchased through Ticketmaster here. Berm seating is $5 with reserved chair back seating costing $10. In case you cannot make it to the games, both home games and all 3 road games this week will be featured on ACC Network Extra.

Top to bottom, Texas Tech is the most complete team Louisville has faced so far this season, and when everything is said and done could quite possibly be the best team they’ll have faced all season. Not only are they led by marquee players like infielder Gabe Holt (who ranks top 20 in hits and stolen bases) and RHP Ryan Shetter (top 150 in ERA, WHIP and strikeouts per 9 innings), but their entire roster is loaded with players who can hurt you in every way. 4 players are batting over .350 (2 over .400), 3 players are slugging over .600, 5 players have drawn double digit walks and their entire starting lineup has double digit RBIs on the season. Not only that, but their 1-3 guys in the starting pitching rotation all have an ERA under 3.5 and are undefeated. Louisville’s best chance to take down the Red Raiders would be use their plate discipline to draw walks and force Tech into some pressure situations, as Texas Tech ranks 234th in walks allowed.

Wake Forest is not as monstrous as Texas Tech, but on the road they still pose a viable threat. Most recently, they hosted the #4 Florida State Seminoles and beat them in a 3 game series in Winston-Salem two games to one, including both ends of a Saturday doubleheader. Their best offensive threat comes in the form of infielder Patrick Frick, who sports a .316 batting average, a .919 OPS, ranks 22nd in the nation in walks as well as 59th by the toughest to strikeout metric. Their biggest strength though comes in the form of their starting pitching. Right-handed pitcher Griffin Roberts has 40 strikeouts on the season (good for 8th in the nation) and averages 13.5 strikeouts per nine innings, while RHPs Morgan McSweeney and Colin Peluse have ERAs of 2.75 and 2.77 respectively. Louisville has done a good job of knocking out starting pitchers early in the game, but they’ll have their hands full with this trio of pitchers.

Don’t let the 14-1 record fool you, Louisville still has plenty of weaknesses. Most notably is their tendency to allow way too many walks, as they rank 231st out of 297 in walks allowed. Another common theme for this Louisville team is that they find themselves in early deficits in the first 2-3 innings way too often. Occasionally this gets compounded by the fact that they are sometimes a bit too aggressive at the plate right out of the gate. The Cards have to correct this pattern if they’re to bring down an offensive juggernaut like Texas Tech or solid pitching team like Wake Forest.

While I do have faith in Dan McDonnell and the rest of the coaching staff to make the necessary adjustments, by all metrics not only is Texas Tech better, it’s for the most part not even close. If this was a three game series I think Louisville could sneak a game away from the Red Raiders, but my prediction is that Texas Tech comes in and sweeps the two game series. On a better note, while I do think that Wake Forest’s 1-3 pitchers in the starting rotation are a problem, they don’t have as much offensive firepower as Louisville does. Wake Forest will win a game, but I predict that Louisville will win the other two games to win the series.