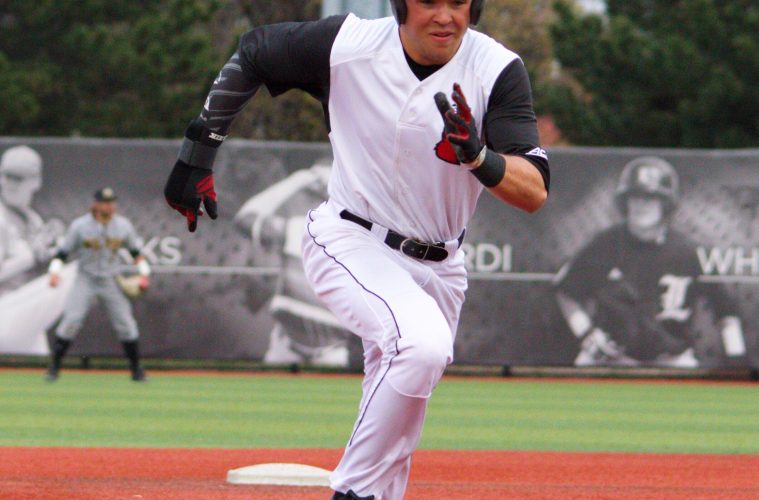 Using a pair of pitchers’ duels and a blowout, the #21 Louisville Cardinals finally broke their 4 series ACC losing streak, and waltzed into Blacksburg, Va to face the Virginia Tech Hokies, where they proceeded to greet them with a three game sweep. In the entire series against VT, the Cardinals pitching staff surrendered only 4 total runs, and the defense failed to commit an error in 2 of the 3 games.

With the game tied heading into the ninth inning and the threat of extra innings looming, junior outfielder Josh Stowers only saw one pitch in his at-bat but made it count. With one out and facing a 0-0 count, he struck a fastball right down the middle and sent that ball over that left-center field wall to give Louisville their second straight game 1 victory.

The majority of the game had been a pitcher’s duel, with VT’s starter going 8.2 innings and starting pitcher junior Adam Wolf going 6.0 innings. Wolf had fanned 8 Virginia Tech batters while allowing zero walks and only two earned runs. Sophomore right-hander Shay Smiddy also had a couple solid inning, striking out 3 batter in 2.0 innings of relief.

The Cardinal Nine had been kept relatively in check for the first seven innings of the game, only mustering one run off a single by sophomore first baseman Logan Wyatt in the first inning. Virginia Tech took advantage of the quiet offense and seized the lead in the fifth inning, plating a pair of runs to make it 2-1.

Louisville’s bats finally woke up in the final two innings of the contest. A single and a double in the eighth inning by Danny Oriente and Tyler Fitzgerald would get runners in scoring position, and after a throwing error by the Hokies’ third baseman followed by a prolonged review of the play, the Cards knotted up the score at 2 runs a piece. Stowers’ home run in the ninth would give Louisville the lead for the first time since the middle innings, and a shutdown ninth inning from junior closer Sam Bordner would keep Virginia Tech at bay and secure the series opening victory.

In yet another pitchers’ duel against Virginia Tech, sophomore left-hander Nick Bennett shined the brightest in a domination of the Hokies from the mound. His 8.0 inning start was the longest outing of his career, and he also sat down 7 Virginia Tech batters while only giving up 1 run off 3 hits and 1 walk.

Louisville mustered just enough offense to come out on top, with a pair of runs in the third and fifth innings thanks to freshman infielder Lucas Dunn and junior catcher Zeke Pinkham, as well an an insurance run by outfielder sophomore Danny Oriente in the ninth. Despite the low scoring affair, the Cardinal Nine never trailed, as Bennett’s lone run given up came in the bottom of the fifth just after Pinkham’s RBI single.

After Bennett’s day was done, All-American junior closer Sam Bordner made his entrance in the bottom of the ninth and continued the dominance over the Hokies with a pair of strikeouts to shut the door.

The Cardinal Nine capped off the weekend on the road with some fireworks, proceeding to blowout the Virginia Tech Hokies to the tune of 16-1 on their home diamond. The 16 runs plated by Louisville tied their highest run output of the season, having scored 16 runs on two previous occasions, neither of which was against a Power 5 opponent.

In the first three innings alone, the Cards put 13 runs on the board, including 7 in the second inning. Adding insult to injury, Louisville added three more insurance runs in the later innings with 1 in the sixth and 2 in the seventh. Throughout the course of the game whether it was via a walk or hit, every starting position player for the Cardinals made it on base. 4 Cards had multiple hits while 3 Cards had multiple walks. Notably, Lucas Dunn went 3-4 with a pair of walks and 2 RBI, Danny Oriente went 2-4 with 3 RBI, and Devin Mann walked an incredible 4 times.