The Louisville Fan’s Guide to College GameDay (Round 2)

I’m excited, you’re excited, we’re all excited. College GameDay is making its return trip to The Ville, and this time it’s bigger and better. The reigning Heisman winner. The defending National Champions. 8pm primetime slot. I know we seemingly have this discussion every time UofL has a massive game, but this Saturday could very well be THE biggest game in Louisville Football history. That being said, we need to make sure fans have all the bases covered so that when it’s time for College GameDay to get rolling, we can make this day as memorable as we hope it will be. Considering I was at the set last year, let me provide all of CardNation with valuable insight as to how to go about the morning leading up to the game.

With the current construction Papa John’s Cardinal Stadium is undergoing, obviously College GameDay isn’t going to be in the same spot they were last year. This time, they will be setting up shop on the lawn in front of Grawemeyer Hall. If you don’t know where that is, it’s where The Thinker statue is. Plus this time, you won’t have to rush from the College GameDay set to your seat like last year.

A huge staple of College GameDay are the sheer number of signs that fans bring to the set. However, there are rules regarding signs that make sure the GameDay broadcast doesn’t turn into a TV-MA one. Some of these rules probably seem like no brainers, but clarification always helps.

For example, my original choice for my College GameDay sign was gonna be this:

While you should never pass up the opportunity to make a Chappelle’s Show joke, I highly doubt ESPN would allow a sign with a drug reference on it. So I ended up going with this sign:

Okay… this might be the one I go with #GameDaySign pic.twitter.com/a0F4rJlkpN

Just as funny, plus it always feels good to remind Clemson Twitter who won the Heisman.

If you want to be a part of “the pit”, where fans and signs get the most airtime, get there early, and I mean EARLY. I’m talking so early that even a UPS-er would look at you funny. Last year, I got to the line to the set around 2:30am, and there were about 10 people in front of me who had been there since midnight. I can only imagine there will be people there even earlier this time around. Technically, per ESPN’s rules, the line for entry to the entire GameDay set doesn’t start until 4am, with fans starting to enter the set around 5am. So I suggest that you get there as early as you can to possibly avoid potential line jumpers and just general confusion. 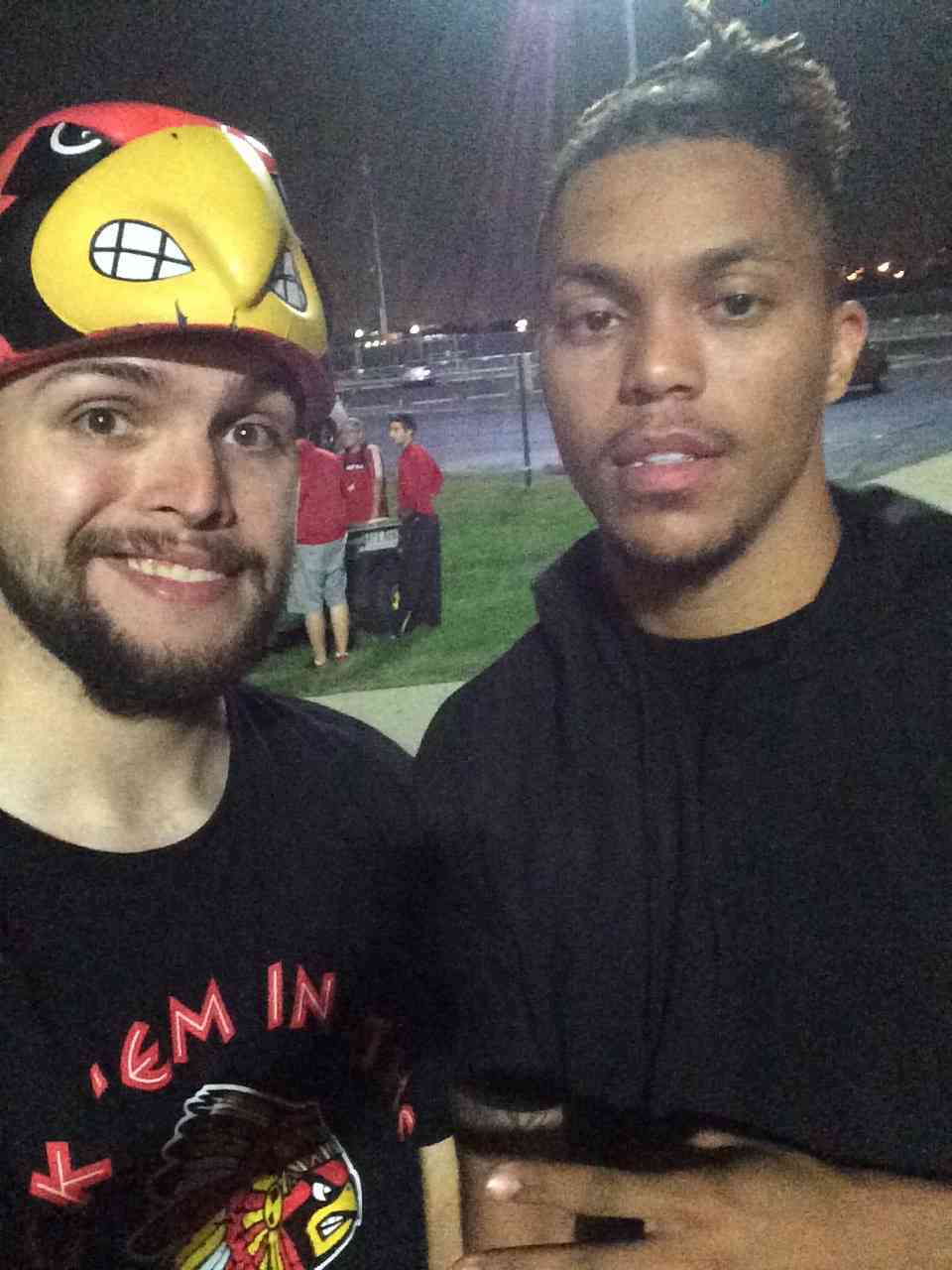 Plus you might get to meet some local celebrities as well.

Once you get into the set, they don’t actually open the pit until around 6am. This part is exceedingly annoying considering you’re pretty much all squished together, and ESPN’s crowd control guy is… not very nice. Once 6am rolls around, then they well let people into the pit one person at a time.

The set itself also has some rules to adhere to as well. This includes:

You will also be checked at the gate by security, including use of a security wand. So no, you probably won’t be able to sneak in a flask.

The biggest piece of advice I can give, and this applies to everyone, is:

Whether it was the line to get into the GameDay set or the line to get into the pit, there were several times where people just wanted to rush forward. I am begging you not to do this. All this will do is prolong getting where you want to go, and could quite possibly trigger a stampede. In fact, those with high anxiety or claustrophobia might wanna skip getting there early altogether, because it got pretty hectic last year with the crowd at times.

Keep in mind everything I just told you, and College GameDay will go off without a hitch.