Buckethatology: Even better than we were the last time baby 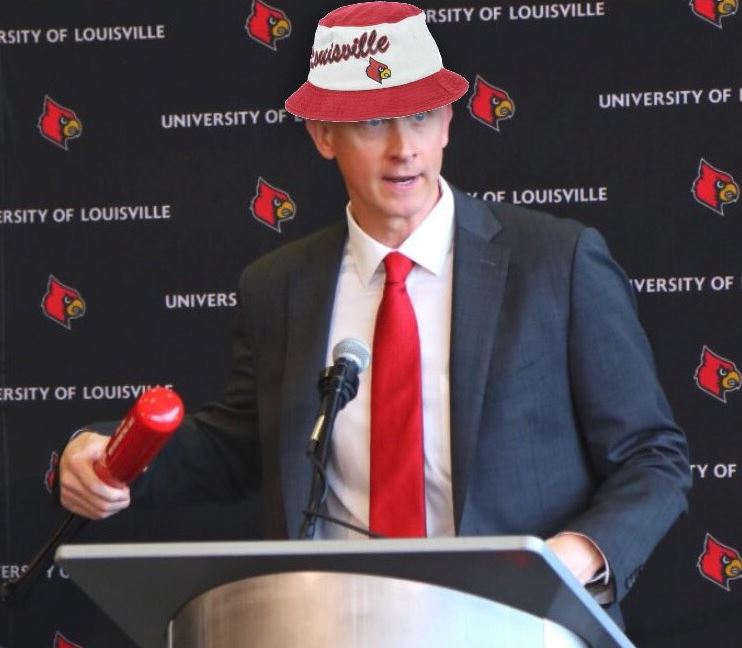 These moments were all too familiar for the Louisville fanbase this season.  Last summer we were giddy when thinking about the incoming class and the returning players.  We had angry Rick Pitino and the last time we saw that guy we ended up cutting down nets in ATL.  We had the team this year that the class coming in next year to make some serious noise………and then that fateful week in September proved that we had nothing but a pile of feathers, a ton of questions, and a team with no leader.

Before we close this chapter of Louisville basketball,  let us all applaud the sacrifice and effort put forth by one David Padgett.  It takes a special person to step into a role with so much on the line and lead the team.  Padgett deserves every head coaching offer he gets.  He stepped into a impossible situation and did the best he could with what he inherited.  Yes there was soul crushing defeats, yes there was head scratching coaching moves.  Merely growing pains.

But there was also the night of January 16th when we came home from South Bend, Indiana without a loss in our column.  There was the night where half the fanbase went to bed and missed a 17 point comeback against FSU, our first win on the road against a ranked team in years.  There was the first ACC tournament victory in Brooklyn weeks later followed by an unbelievable crowd at several NIT games in the YUM Center.  That is what CardNation is all about, and David will reap the benefits of that in due time.

I will always speak highly of Tom Jurich. I will always get chills talking about the defense of Pitino’s teams and how we suffocated teams with the press or matchup zone.  But I will most remember the 2017-2018 season as the season where Lousiville fans were broken, bloodied, but unbowed.   No other fanbase can get punched in the mouth hard, lose consciousness while laying on the floor, and then continue to get up.  Again, that is CardNation.

Now, lets move forward.  You are wondering why the BHK is in swim trunks and flip flops with no shirt and exposing his kid-less dad bod.  Well, the BHK is prepping to go on his yearly sabbatical from writing but do not fret, I will return for Season 3 in the fall when we kickoff football season.  Before I go,  let’s get to the final notes as we close the book on Season 2:

Any outbursts from the court and you will be removed by the my multiple bailiffs which is  every single teacher or principal in the state of Kentucky.  It takes a special person to step in and agree to teach. Your pay is terrible, you put up with a ton of BS throughout the year, and like the students there are days you want to stay in bed and not go to school.  But day after day, and month after month there you are in the classroom putting together a lesson plan and trying to improve lives whether it’s a 1st grader or a senior headed to college.  Perhaps we should take what we pay politicians in this state and instead give that to people who are REALLY bringing the changes that we need.

This was taken after  a McMahon three pointer. Shorty in the red shirt is risking it all.   This guy must be stopped.

Which brings me to the guy who I have not mentioned until now.   The BHK wants to send a warm welcome to Chris Mack who was named head coach on Wednesday afternoon at the YUM! Center.  I was fortunate enough to cover that along with fellow TCZ running mate Joe Kelly (TBG) and our entire experience was documented here if you wanted to relive it:

Excuse my hairline and scruffy beard.  The BHK gets his hair and beard taken care of every Thursday so as always I was a day late and a dollar short.  Back to Mack.  I was happy Louisville finally got their guy and was pleased that is was the person the majority of the fanbase wanted.  Mack seems to bring the optimism and attitude back to the fanbase and that is a great thing to have.  It also helped to have his face all over San Antonio this weekend while he was at the Final Four.

I am not sure how Mack will do here, there is still a ton of uncertainty surrounding the program and as you know the Big East is not the ACC.  This was also the first big hire for Vince Tyra who was named permanent AD last Monday.  There is so much that we won’t know until the team takes the court next season.  What recruits will we get?  Will we land any grad transfers?  Who stays/leaves on this current team?   How many games will Bill Murray attend?  Which Hibachi grill will the Mack family attend first?   How will we get Chris Mack to stop liking Kid Rock?  It’s exhausting.

But Mack is a fiery guy and now has the tools and resources to do more. Xavier was great, but you are officially in the big league now.  Coach Mack vowed to pull students out of dorms to get them to games, something the fanbase has griped about all year. He also extended an invitation to attend practice to all former players which is a good thing and something Coach 2’s ego would not allow.  Hope has been renewed in the fanbase and hopefully winning returns next winter.

And in closing, I just want to say thanks to all of you who read and followed this blog all season long. We had some good times and bad, but you all stuck through it and allowed me to be your tour guide through some of the roughest stretches we have seen.  Thanks for sharing, and for interacting with me along the way.

The BHK is off to get married here in a few months so when I return it will be with a ring on and a fully dissolved hairline.  Just want to thank Mark Blankenbaker and the good folks over at The Crunch Zone website.  Thanks for giving me a platform to spew my thoughts and most importantly to be a fan with an outlet that people can relate to.  Thanks to my boys Joe Kelly and Dave Scull for pubbing my work and for inviting me to join the TCZ Podcast this year, it has been a great experience I am grateful for it.  Thanks to Orlando Larry for keeping my humbled on air last week lol.  Thanks to my agent, Tammy2k for keeping the checks coming in and the bucket hats replenished.

Welp, I will return in August for football season with the third season of BucketHatism.   New QB, new defensive coordinator, new defense,  same old me.   Catch us all at the TCZ/FDKY tailgate on April 14th for the Spring Game.  I will be there consuming ungodly amounts of brisket and slandering Kid Rock’s music catalog.