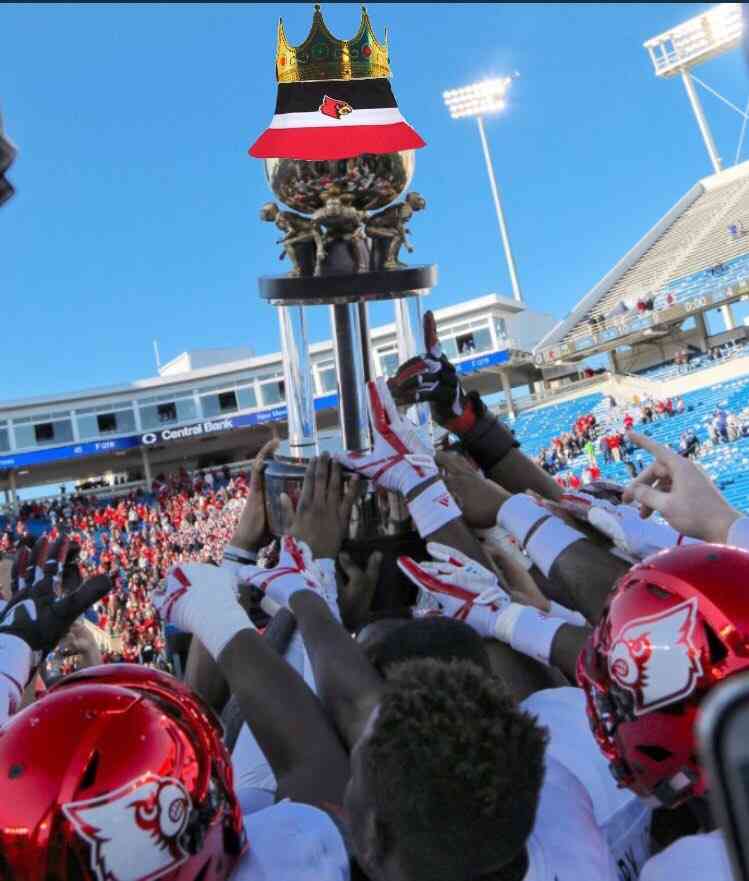 Dearly beloved, we are gathered here in the sight of  CardNation and in the presence of these witnesses, to join together this foot,…….of Louisville football and this ass,…..of UK Football…..in holy matrimony.  We gather here to witness this love and the vows they will make to each other on this, their Governor’s Cup day. We join in our support of them as they offer themselves to each other. We celebrate the joy of this beatdown, and the misery of UK fans and their expectations.

I will never get tired of beating UK.  I don’t care if it is in Uno or Connect Four.  It will never get old…..EVER.  I was going to go easy on them if we won, but then I remembered all the memes and disrespect shown to Lamar for the past year.   A fanbase that just refuses to know their role was humbled on Saturday (again) and now we start the process of preparing for them to go to the CFP playoffs in July.   Blame your fans for what you are about to read BBN,  also blame Jordan Jones who cannot stop getting personal fouls.

Any outbursts and you will be removed from the court by multiple bailiffs. My boy Dave, you know him as @BiggestBiscuit.  The cigar handling, meat smokin’,  hot taek throwing phenom from TCZ.   All he does is break down offensive line play and bear hugs your mom while giving your girl the eye……….HAMMAH!!!   The lovely Liz Crowe (@TheLizCrowe) who is an accomplished author but will never write anything good about Kentucky Football.  And Good Time Charlie (@GoodTymeCharles) who has picked better first downs out of his glorious beard than UK had in the game on Saturday.

Probably not the best idea to piss this guy off, but they are BBN.   Congrats, you have the pleasure of seeing this pic of Lamar prancing through your defense .  Make sure the juice is worth the squeeze folks…..

I flit, I float. I fleety flee, I fly. pic.twitter.com/Ljxa2gszcs

Speaking of  G.O.A.T’s,  Lamar just being Lamar on Saturday.  Don’t worry, he does that to everybody.   Matter of fact there has not been one game where UK has been able to stop Lamar, even in last years win against UofL.  Let’s take a look shall we:

In three games,  against the Cayuts Lamar has passed for 627 yards and rushed for 513 yards and scored 9 TD’s.  The results are in, he is your father UK.  And you know, it probably wouldn’t have been that bad had your moronic fanbase not trolled him for a year with that pic of him fumbling.  My advice to you going forward, if the man coming, make ready for the man.

Take a look at this picture, this was the only time you saw Mason King today. pic.twitter.com/8VezhT2Lpf

If found please notify Mark Stoops……or don’t.  He knows exactly where his punter is.

I mean, you guys lie about things you have no business lying about.  Like we don’t have smart TV’s,  like they don’t make 4K quality televisions these days.   You decreased seating in your stadium and STILL can’t sell it out.  The game ain’t in you no more,……none of it.  You guys specialize in leaving seats open though:

Where did everybody go? pic.twitter.com/XzoQr5W9KU

That is not good. pic.twitter.com/PJrpKr77OD

That is what it looks like when your wireless controller dies during the game.   Dude was looking like me when I go to get the last donut at work and realize the box is empty.

Lamar Jackson throws a dime to Jaylen Smith for the Louisville touchdown. This TD made it UofL 44-10 over Kentucky in the 4th quarter. pic.twitter.com/XM3ytG52fh

I see some guys from that other site making fun of @the_redbird7 for painting up. Enjoy that glass house pic.twitter.com/Fa5lYZ2xaG

Since that guy apparently has never seen a grown man paint up for a game, lets take a look at some other things he has never seen:

I can go on and on.  Here at Louisville we are qualified to talk about football,  you and the rest of BBN are only qualified to tell us how our asses taste.

“Ok, my team is down by 27 and I just scored a garbage touchdown.   I can’t really trash talk, that would be pointless, I mean look at the scoreboard.  Oh man, the camera is on me right now,  I gotta do something to please the fans. Think Benny, think…….dammit, this horse tranquilizer is wearing off………….ah hell, just throw the L’s down.  Yahtzee!!!  That will show them”

And now what you really came here for.  There are certain players that will forever draw the ire of Louisville fans no matter the sport. I can mention DeMarcus Cousins and raise the blood pressure of CardNation.   I can mention Patrick Sparks and someone in the back of the room will scream “HE WALKED” (which he did…twice).  I can mention Jared Lorenzen and you can insert any weight joke of your choosing.  I can mention Eric Bledsoe and you can hear the Algebra 2 jokes from Knoxville.   I can mention Makayla Epps and women’s b-ball fans will just shake their heads.

But I am still not sure what in the Kroger Field hell was up with Jordan Jones on Saturday.   One thing I will say is that he was consistent. He started the season by hocking a loogie and spitting it into the stands at Southern Miss.  He ends the year by picking a fight with everyone in Fayette County and single handily being responsible for 30 yards and 3 points for Louisville.

We watch a lot of CNN in the BHK household so trust me, I am used to seeing a grown man throw a hissy fit and pick fights when he doesn’t get his way.  But Jones went full on 5 year old on Saturday.  Let’s go to the film shall we???

Exhibit A:  Jones tries to trash talk Lamar and realizes he is not human

Exhibit B:  Jones realizes he was never hugged as a child so gets mad at Lamar Thomas who is a former Louisville coach and was the primary recruiter of reigning Heisman Lamar Jackson.  Jones takes offense and places hands on Thomas.  Jones also realizes he looks like a generic Andre Woodson which didn’t help matters:

Interesting exchange between Jordan Jones and Lamar Thomas after the first half scuffle: pic.twitter.com/qMPE3yksFv

Exhibit C: Denzil Ware tries to re-enact a scene from Spike Lee’s “Do the Right Thing” but in typical UK defense fashion…….he fails.  Advantage trash can

Exhibit D:  Jordan Jones and Denzil Ware acting like a children forced UK athletics to remove this sign in their lobby at halftime:

Exhibit F:  Lamar gets another bat.  Jones gets a rock

Exhibit G:  Stoops realizes his senseless non-football tactics of trying to start sh*t in the Governor’s Cup always ends in a loss.

Mark Stoops and Bobby Petrino share a handshake after the game. pic.twitter.com/BDvaStCrXO

Jordan Jones may be a competitor and a great football player but if I am Stoops you have to sit him for the bowl game after that tirade. He had two late hits, got into a scuffle, pushed a UK coach, and walked out of a team huddle.  Someone needs to change his filled diaper and give him his sippy cup. Dude needs a nap.   This is the Governor’s Cup gentleman, the Gods will not save you.

And it typical fashion, BBN tried to flex their muscles in the only bowl they know best,……….the toilet bowl:

Shout out to Jordan Haynes. He was trying to get a CARDS chant going and Jim Bob here wanted no parts. He yelled “NOBODY WANTS TO BE FROM YOU” which ironically is the exact same thing  I yell when I meet people from Lexington.

So I'm standing next to THIS guy in the 4th. And he says to his buddy, I shit you not, "please at least make them punt once." #GOALS. @UofLSheriff50 pic.twitter.com/1Y4CcGkun0

**FREEZE FRAME**  “That’s me in the blue jacket, I bet you’re wondering how I got in this situation. Well it started after the first contract extension and”…..

Once again, thank you @LamarCoachT for recruiting Lamar Jackson to Louisville pic.twitter.com/HBKNbjnrHE

And in closing I want to thank every single member of CardNation for reading this every week.   Thanks for the retweets, the shares, the likes, the quotes. Thanks for letting me be me week in and week out.  Thanks to Mark Blankenbaker for letting me use the site he and Mike Lindsey worked so hard to build as my own personal therapy for the past 3 months.

I want to thank all the readers for sticking with me even when I went on a profanity laced tirade following two games this year.   Thanks to J’Aunna (@J_TrueBeauty) for letting me know when I have a typo or used the wrong name in my post.  Thanks to my agent, @Tammaland for handling my personal affairs.  Thanks to TBG for the advice he gave me a year ago.  Sorry for offending anyone with my language,  I may be a lot of things but fake is not one of them.  From the womb to the tomb, this is me.

Also, for your reading enjoyment,  I included some quotes from The Wire throughout this post. See if you can spot them all.  Season 2 of BucketHatism was fun, lets hope Season 3 of BucketHatism in 2018 is better.

Now BBN,  it was so hard for me to sit back and see your fans talking sh*t about our university when last year I spent more money on uneaten  brisket in smokehouses from one side of the Midwest to the other, than you made.

You talking to the Bucket Hat wearing……..Louisville hoody wearing……..kiss stealing, woo, wheelin’ dealin’ , Lyft ridin,  Honda drivin’, son of a gun…… and I’m having a hard time, holding these Nike Air Max’s down.  There’s only one BHK!!