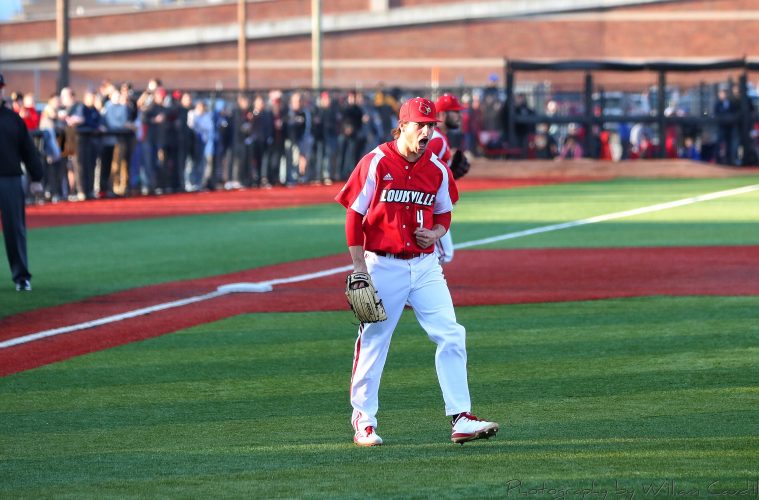 For the program’s first annual Bark at the Park Night, the #12 Louisville Cardinals (25-8) welcomed the Northern Kentucky Norse (8-23) to Jim Patterson Stadium where they greeted the Norse with a 11-2 victory. Hitting and pitching were both clicking for the Cards, especially in the second half of the game. This was also accompanied by the fact that NKU couldn’t seem to get out of their own way. The Norse racked up 3 errors and 6 wild pitches, with 4 of Louisville’s runs a direct result of NKU’s defensive and pitching miscues.

For the 19th time this season, the Cardinal Nine were able to put up a run in the opening frame. Making his way back into the lineup after a lengthy absence due to injury, sophomore Lucas Dunn’s impact on the game was felt immediately. He collected a lead off base hit and subsequently stole second to put him in scoring position. With shortstop Tyler Fitzgerald at the plate, the junior struck his second triple of the year to send Dunn home and crack the scoreboard. Fitzgerald would collect his second extra base hit of the game with a double in the third, and he himself would be sent home by junior first baseman Logan Wyatt’s lone base hit of the game to make it 2-0.

A staff day for the Cardinals, the bullpen did a solid job of making sure the Norse did not get on base. Starting pitcher JUCO transfer Luke Smith, junior Shay Smiddy and freshman southpaw Garrett Schmeltz would combine to strikeout 9 NKU batters, and allow only 1 run off a pair of walks and hits in the game’s first five innings.

The Cardinal Nine put up their first crooked number inning of the game in the fifth inning, and it had freshman Alex Binelas’ name all over it. With Wyatt and Zach Britton on base and both in scoring position, the freshman sent them both home with his second double of the season. He would then take advantage of two consecutive wild pitches and plate Louisville’s fifth run.

Northern Kentucky would pose their first major threat of the game in the sixth inning. With the bases loaded full of Norse, a wild pitch from freshman Jack Perkins would plate their second run of the game and a walk to re-load the bases would prompt Coach Mac’s first mid-inning bullpen call. Sophomore Adam Elliott would inherit the jam, and the left-hander would manage to collect the third out without surrendering anymore runs in the inning.

Countering NKU’s near-big inning in the sixth, the Cardinal Nine responding by executing what the Norse should have pulled off. Zach Britton would kick off the 7th inning with his first double of the season to bring home Logan Wyatt, with a wild pitch also bringing him home. Later in the inning, outfielder Drew Campbell would notch his 3rd sacrifice fly of the season, with yet another NKU wild pitch bringing home pinch runner Trey Leonard to complete the 7th inning 4-spot. This would mark the 13th time this season that the Cards have plated 4 or more in an inning.

Louisville would add some insurance runs in their final inning at bat, partially thanks in part yet again to the NKU pitching staff. A sacrifice fly from Logan Wyatt would send home outfielder Ethan Stringer and give Louisville double digit runs for the 8th time this season, and another wild pitch would send home Tyler Fitzgerald to complete Louisville’s scoring efforts.

After Perkins’ hiccup in the sixth, the pitching staff bounced back in the latter half of the game. Over the final 3 innings, Adam Elliott, and freshmen Kerry Wright & Carter Lohman would allow only 1 hit and strikeout a trio of NKU batters. By the end of the game, seven Louisville pitchers would combine to toss 14 strikeouts while only walking 5 and allowing only 1 earned run.