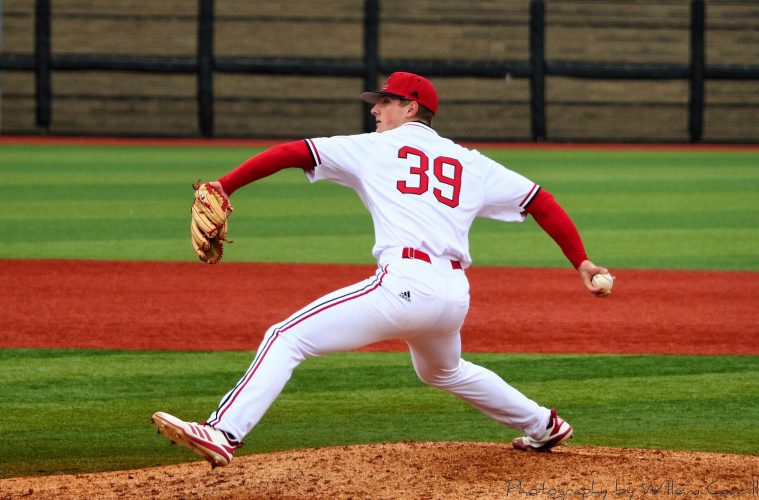 In the final week before conference play is set to begin, the #8 Louisville Cardinals (8-3) ran into a slight speed bump before seemingly turning things around in a big way. They dropped the midweek game by only plating 4 runs to a Xavier Musketeers (5-5) team that had allowed over 9 runs a game, but were able to respond in a dominating way for the weekend. In the sweep of the James Madison Dukes (7-4), Louisville struck out 43 batters over 27.0 innings with all three starters setting career highs in strikeouts. The Cardinal Nine’s offense also had themselves a good series, by plating 17 runs on 26 hits and stealing 12 bases.

At this point in the season, Louisville’s pitching staff has established themselves as the best unit on the team. Over the past week, they collectively only allowed 6 runs and posted a strikeout-to-walk ratio of 58-3. So far in 2019, Louisville has a team ERA of 1.96, a WHIP of .88, and a strikeout-to-walk ratio of 128-28. Coach Mac has a plethora of talented arms to choose from on any given day in any given situation.

The offense for the Cardinal Nine has began to shape into form after having a bit of a shaky start to 2019. The top of the lineup guys in Lucas Dunn, Jake Snider, Tyler Fitzgerald and Logan Wyatt have become a model of consistency, being the only players on the roster to have started in all 11 games this season. With Dan McDonnell having been a defensive and base running minded guy from his playing days at The Citadel, it was only a matter of time before the Cards started racking up stolen bases. They swiped 14 bases in the four games last week, and with an improved 13-48 (.270) batting with runners in scoring position for those games, it lead to more frequent run scoring opportunities.

However not all is perfect and there are still some things to be worked on at the plate for Louisville. Clutch hitting is still a slight issue, as over those same four games the Cards went only 8-41 (.195) with 2 outs. As a result, they continued to struggle with leaving runners on base, leaving a collective 35 men on, including 11 in the 5-4 extra inning loss to Xavier. While it is nice to see improvement in most facets of their offensive game that required it, there is still work to be done to ensure that they are playing to their full potential.

Coming up this week, Louisville will continue their 14 game home-stand by facing two Eagle mascot teams. They’ll start with a Tuesday midweek game against the Morehead State Eagles (9-1), and follow that up with a 3 game weekend series against the Boston College Eagles (6-4) that will officially begin conference play.

Louisville will spend the entire week at Jim Patterson Stadium, with the midweek game on Wednesday and a normal slate of weekend games on Friday-Sunday.

Adjusting the ticketed entry plan first featured last season, 17 of this season’s 34 home games will revert back to free entry. Tickets can be purchased here. In case you cannot make it to the games, all 4 games will be broadcast on ACC Network Extra. The midweek game can be heard on 1450 WXVW, game 1 and 3 of the weekend series can be heard on 93.9 The Ville, and game 2 of the weekend series is to be determined.

Upon glancing at the stats sheet, Morehead State definitely has a team to be feared at the plate. Their batting average, runs and slugging percentage are all ranked in the top 10 of all Division 1 baseball, with most other offensive categories not far behind. 6 of their 8 starting position players have batting averages over .300 and slugging percentages over .440, with two of them posting absolutely insane numbers. Seniors Jake Hammon and Hunter Fain have established themselves as the veteran leaders of the program, and then some. Hammon carries a slash line on .476/.552/.548, leads the team in hits with 20 and is second in RBIs with 11. However as improbable as it seems, Hunter Fain posts even crazier numbers. He posted a slash line of .560/.676/1.120 for an absolutely unbelievable OPS of 1.796. He has 4 home runs in just 25 at-bats, and leads the team in total bases despite being 7th on the team in at-bats. Pitching wise, Morehead sports an average pitching staff, with only Landon Weins really standing out. The freshman reliever leads the team in ERA, surrendering only 1 earned run in 12.1 innings pitched over 3 relief appearances. While on paper Morehead seems like an offensive juggernaut with their 9-1, it is actually quite deceiving. The Eagles have not played an opponent with an RPI better than 151, including Oakland and Charlotte with RPIs of 273 and 268 respectively. It may initially seem that Louisville’s pitching staff will have their hands full, but a deeper look suggests they might not have as tough as a time as one would think.

If Louisville had their choice on who to begin conference play with, they most likely would have picked Boston College. In the preseason, BC was picked to finish dead last in the Atlantic Division by all 14 ACC head coaches, and as of right now are a very run-of-the-mill team who stats wise does a bunch of things relatively well but doesn’t particularly excel at any of them. At the plate they have a few serviceable options, but none better than infielder Sal Frelick. The freshman leads the team in all 3 slash line categories (.438/.500/.667), hits (17), RBIs (12) and total bases (26). If Louisville can keep him in check, they should be able to manage the rest of the lineup.  As for their pitching, the Eagles mainly rely on trying to keep their starter in and not have to go to the bullpen. Across all 10 starts, Boston College has an ERA of 2.73 (16 ER over 52.2 IP) but their bullpen innings carry a much higher ERA of 5.77 (22 ER over 34.1 IP). The lone outlier to this theme is relief pitcher John Witkowski. The senior right-hander leads the Eagles in strikeouts with 12 in just 8.2 innings across 5 appearances. As long as Louisville isn’t running into Witkowski when they run the starting pitcher out of the game, their keys to victory are going to have to be attack early.

My prediction for the week is that after Louisville handles their business against Morehead State, they will go onto sweep Boston College for their third straight weekend sweep.