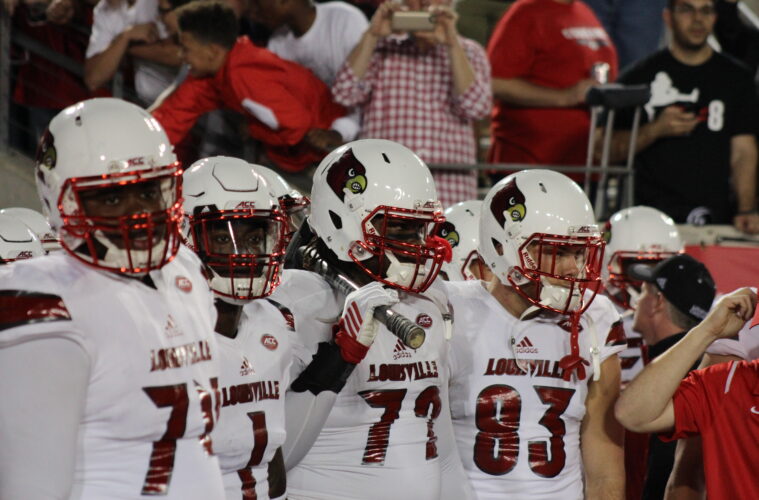 The Louisville Offensive Line in 2015 was YOUNG and influx throughout the season. The Cards do lose T.C. Klusman, Pedro Sibiea, Aaron Epps, Skylar Lacy, and Kelby Johnson as players who have left the program with significant game experience.  But there is a lot of reason for optimism because the Cards played 3 FRESHMAN for long stretches during last season and the expectation is that experience will allow for a big step forward along the O-Line in 2016.

The front line of UofL Football was 124th (of 128th) in Sacks Allowed per game & 119th in Tackles for Loss Allowed per game in 2015.   Additionally UofL was just 64th in rushing in 2015 despite having a running quarterback in Lamar Jackson gaining 960 yards.

Geron Christian was THE surprise of the season playing the weakside (LT) spot for the entirety of the season as a true freshman.  How far has Geron come from a year ago?  That’s the big question.  We all saw the raw potential last season and in Fall Camp it was more of the same.  Christian’s potential is OFF THE CHARTS so you’ll have to excuse our personal excitement for his sophomore year.  Geron has wonderful body control and can also get nasty when he wants to.  We do expect some mistakes at the toughest position on the field, but we think Christian is sitting on a monster season.

The other expected starters are Center Tobijah Hughley, Kiola Mahoni, Khalil Hunter & Lukayus McNeil.  Hughley returns for his senior season and will be a 3-year starter for the Cards after formerly being a walk-on and now stands as a Team Captain.  Hughley absolutely needs to settle down on some of his pre-snap penalties that have drawn the ire of the fanbase, but if you turn on the tape its easy to notice Tobijah Hughley playing remarkably well down the stretch of last season, particularly when Kiola Mahoni emerged at guard in favor of Skylar Lacy vs. Kentucky & Texas A&M.  Mahoni looked confident this Fall Camp after missing the Spring with a hand injury but really came on strong at the end of last season and seemed to have a lot of awareness and mobility at Guard that UofL needed.  Lukayus McNeil will move from Guard to Tackle after the coaching staff felt that he played somewhat out of position last season.  Bobby Petrino regularly mentions Lukayus as someone who he believes will have a big year for the Cards…and it’s usually a good idea to listen to the head coach.  Lastly for the expected starters Khalil Hunter is most often touted as Louisville’s ‘most athletic’ offensive lineman.  We expect Hunter will be starting at guard for the Cards next to Geron Christian, but if things aren’t going well the Cards have a few options to mix & match with their #1 unit.

Kenny Thomas is probably the first guy off the bench if the Cards need to force a switch on the Offensive Line.  Kenny played Tackle last year and started a few games.  We really like Thomas more as a Guard, but Chris Klenakis & Bobby Petrino appear to be keeping Kenny busy playing both positions so that if the Cards are in a pinch they’ll be ready with the next most ready offensive lineman.   Chandler Jones sat out last year as a redshirt freshman and he could certainly factor in at Guard as well but clearly has less experience than Kenny Thomas as a result of that redshirt. Both Kenny and Chandler being #2 Offensive Linemen is GREAT for the Cards in case they need options (and they’ll need options) during the course of the season.

Beyond that it appears that Tyler Haycraft would be the next tackle available and may even be ahead of Kenny Thomas at Weak Tackle. As is tradition at UofL, walk-on offensive lineman find a way to crack the line-up. The same is true for Nathan Scheler who was recently awarded a scholarship and will be Tobijah Hughley’s primary back-up in 2016.   These two Redshirt-Sophomores from Trinity High School are on their way to following in the footsteps of George Bussey, Alex Kupper & Tobijah Hughley  (and there are more) of players that walked on to Cardinal Football and made an impact.

We’ve also got our eye on Linwood Foy & Toriano Roundtree at Tackle who has a lot of length and mobility.  Last year it looked like Toriano needed to add some strength to his lower body while he was redshirting.  Foy has a lot of athleticism but arrived just at the beginning of Fall Camp as a late addition to the class as a JUCO. Petrino has stated that he really likes what Linwood brings to the unit but needs to work on his understanding of the offense. Additionally Danny Burns also has done a lot of conditioning and lost some weight.  We’ll see if the Redshirt Sophomore can begin to round into form.

Just two incoming freshman in 2016.  Robbie Bell & James DeMatto have bright futures at Louisville, but 2016 is different than 2015 and it isn’t expected that a freshman is going to be able to crack the rotation and burn the redshirt.  We expect both players to really work on playing college football and great ready to factor in the Spring of 2017. DeMatto was a late addition because he was an expected ‘greyshirt’ for the Cards so he hasn’t been going through the team workouts or in the meeting room all summer so a learning curve is expected for James.  Bell has been here all summer and we expect that he’ll hit the ground running but still a likely redshirt for the Cards.  Petrino has gone out of his way to praise Robbie Bell during this pre-season.